two examples are pages of Thag2.22 and SN5.3 where links to the following topics are lacking

About Thag 2.22 what this verse means? Discussion

I have finished reading Thag. I think the strangest verse is Thag 2.22 . It's strange while another verse describe the release, this verse actually describes grandeur. I really dont know what this verse describes. Anyone can help me? :confused: Sorry for my bad English... :smiley:

How to have a boundless heart (SN 5.3) Essays

The story of Kisagotami is relatively well-known by Buddhists. [image] A young wife craves for a child, and after many years she gives birth to a son. Can you imagine her joy to have a son, after waiting for so many years? And can you imagine her relief from all the pressures that women faced in marriage to provide children, especially a son? But her child died when he was still a baby, and the grief was too much for her to bear. She wouldn’t give over the child for cremation, but carried h…

Ha ha, I thought you meant Dungeons and Dragons!

@blake can you please check this?

that would pass for an apt alternative name

I agree! Instead of this boring “Discuss & Discover”, lets make it “Dungeons & Dragons” (I loved that game … esp. the version written in Basic (for those of you who are too young to remember this: Basic is one of the first computer languages in the 1970s))

My first computer game was Braminar, a text-based game back when DOS was on a 5.5-inch floppy disk. 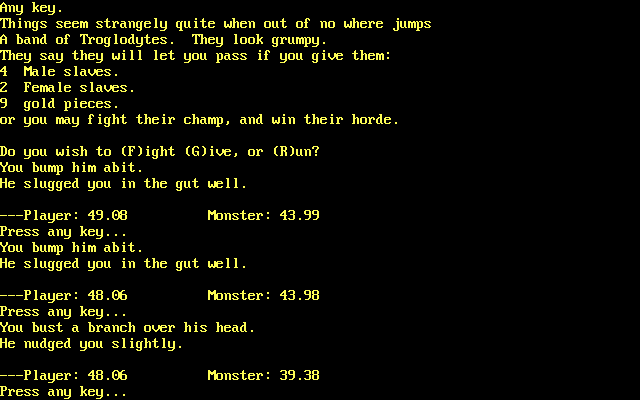 Tragically I was never a D&D nerd.

Anyway looks like it choked on some posts. I made a fix and it looks like it’s indexing the posts again and they are visible under D&D.

I also added “Feedback” to categories excluded from being linked to (the other excluded category is Meta) since it’s mostly references to typos and broken links and meta-conversations like this one. (it may take a while for this change to be reflected)

while we’re on the topic of D&D may i suggest making D&D panel and Textual details/Languages panel not mutually exclusive when D&D list is unfolded? just now i was confused by this behavior having to wonder where the other panels went

maybe it could be configured in such a way that long D&D lists are confined to their own window with a scrollbar so they don’t have to take up the entire height of the sidebar thereby leaving space for maintaining visibility of the two other panels, which in my opinion are much more important

aaaaaah, just noticed the change in the heading

Anyway looks like it choked on some posts. I made a fix and it looks like it’s indexing the posts again and they are visible under D&D.

I also added “Feedback” to categories excluded from being linked to (the other excluded category is Meta) since it’s mostly references to typos and broken links and meta-conversations like this one. (it may take a while for this change to be reflected)

Thanks. But it is still erratic to me. I get nothing for MN 10. Maybe it’s choking from too many posts?

Another issue, @blake, if you check the security on this page, Chrome gives me a warning. Probably this is due to the image in a post, which is served over an unencrypted URL. I’d like to force all images to use https. Is there a setting we can use to enforce this? I’ve seen reference to this over at Meta, but not how its done.

Given that we are not an image-intensive site, blocking an occasional image won’t affect us greatly. It would be good if users get a warning, so if they like they can upload the image and we just serve it ourselves. Again, there’s not many, so it shouldn’t be a burden. My priority is user security. In addition, as time goes on Chrome and Firefox will make the warnings for unencrypted content more and more intrusive, so it becomes an issue for user trust.

may i suggest making D&D panel and Textual details/Languages panel not mutually exclusive when D&D list is unfolded?

You certainly may! We’re not looking at this right now, but we will bear this in mind for a future review of the panel.

aaaaaah, just noticed the change in the heading

Well I definitely welcome the new name. I can’t imagine that anyone would be opposed to a Dungeons & Dragons themed Buddhist forum.

Tragically I was never a D&D nerd.

Very tragic indeed. So you don’t even know that the best way to fight a dragon is with a canary.
Not sure what the canary did any more. I think it just tweeted the dragon to sleep … the force of loving kindness!

back to normalcy, gloom and suffering, oh well

Come to think of it: The Dungeons of Samsara i.e. Dukkha.
Dragons have always played a mythical role in most cultures and are also present in Buddhism: On dragons and human sacrifice

Right, I sometimes think that if people enjoy fantasy, comic books, or roleplaying games, then they should like Buddhism too. The Buddhist cosmology is full of worlds upon worlds, different colorful creatures, supernatural beings, and fantastic powers.

Well, D & D isn’t too bored for few people… In my Indonesian Pre Sectarian Buddhist forum, everyday we still discuss something from Sutta and Vinaya… :3

That’s nice! May I ask, where is your group?

Whatsapp Bhante, I’d like to invite you to our small comunity…

That would be great, thanks! Some time, when I’m not so engaged …