Dear Dhamma friends and Venerables
Just a quick note to let all concerned know that the nuns have evacuated safely .
There is a bushfire out of control a few kilometres from the monastery which we became aware of around midday. By 2pm we had our evacuation kits ready and started vinaya class. At approximately 4pm the sky was filled with dark smoke and even though we were outside the warning zone we decided it was time to leave. The community are all safe and being well looked after by family and friends.
A new website called Bushfire.Io seems to have the best information. I imagine our website will be updated as needed.

Thank you for letting us know. Have also asked many of the monastics here, at Pa Auk Maymyo to chant and send protective blessings.

For the first time I am not feeling optimistic… The wind has changed direction, unless the containment lines hold, Dhammasara is or will be in the fire’s path.

But whatever happens we keep living by Dhamma. I remember an Ajahn Brahm quote:

I remember Ajahn Brahm’s attitude, as recorded here by Ajahn @Brahmali, after the 1991 fire. We have to think like him. Ajahn, please ask Ajahn Brahm and the monks to chant for us, but also for the people and other creatures who are impacted. I just found out that one of our neighbour’s homes has burnt to the ground.

Very distressing, I can’t do much but send metta and what ever merit I have your way

A friend send the following message:

“Seems wind will change to from east northeast to easterly again in 2 hours so hopefully can be ok, then it will turn back on itself as westerly for a few hours in the arvo , it will be close , but nunnery designed to withstand this”

Some Bhikkhunis in Taiwan are also chanting and sending blessings.

Here is the Fire Chant for those who don’t know it: The more people who can join and ask the devas for protection. There are some amazing stories sometimes - like Santi FM last year -

Oh dear. Sending calls to the devas to help protect Dhammasara and all the living beings in the area

The latest satellite image and wind forecast don’t look great. However, I can see the helicopters working hard over our northern boundary and the property to our north is large and pretty much cleared. A fantastic place for the fire crews to stage if they need to. Plus they have a lot of fire water available to them on our property. My main concern is for our neighbours who are not nearly as well prepared.
Soon the community will mostly reunite at Jhana Grove.
Adding to all this mess is Western Australia is currently in a 5 day hard lock down for COVID 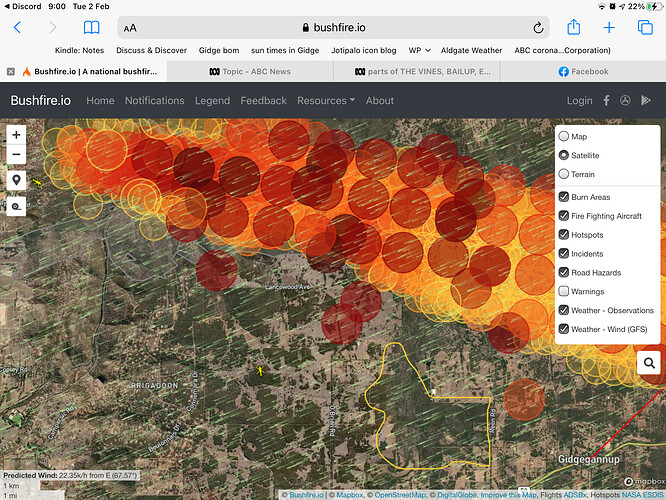 The latest satellite images are not looking good.
That red spot is probably the neighbours’ building but this means there is some fire close to one of the densest areas of the property 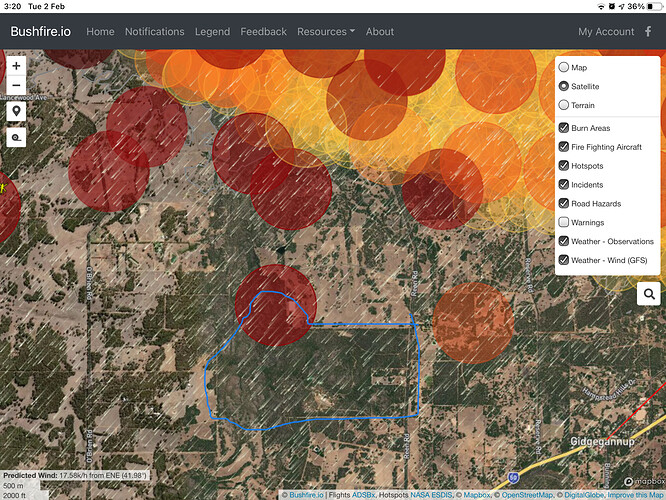 It’s not the buildings…though they rock… It’s the frogs in the ponds, those nutty Magpies, the devas in the trees…

It’s a place made to protect Buddha Dhamma by its very existence.

And our personal friends- the kangaroos who share our dāna.

The wind change seems to be in favour of the monastery but heading towards many houses.

Most of us are now together and have taken a good rest. We have had a delivery of spare robes and jackets and other requisites. Food is plentiful and we are taking this as mini retreat time. We are not expecting to return to Dhammasara before the weekend.

We will be chanting the Quails fire protection at 11am and 7pm ish Perth time.
7pm we will also do a small paritta and share merits. Feel free to join from afar if the timing works.

Dear Dhammasara sisters,
So glad you are all evacuated and safe. Sending much metta and moral support your way (and chanting support too) from us nuns at Santi… can truly say we know exactly what you are going through!!!
May the Triple Gem bless you all and the whole region under threat and bring the flames to heal quickly!

Thanks everyone for your kind messages of support.
The monastery is still in red zone and the fire still burning, although the active front is about 8km from the edge which came close to the monastery.
The power network has been extensively damaged.
Most of us are resting at Jhana Grove and anticipate being here a while.
Currently we are under Covid lockdown so cannot have any visitors. We have plenty of food and other requisites thanks to donors and the Monks at Bodhinyanna.

Things are looking good. The fire is 95% contained, the power restored to our area and the alert level downgraded to Advice for 80% of the property (the campsite and northern forest is still in the yellow zone).
Things will start returning to normal in the next few days. Stay tuned to the bswa website for details

I didn’t realise that Dhammasara is on that side of Perth.
May the fire die down quickly and consume no more sentient beings.

The community is now back at the monastery & we visited them a couple of days ago. It was more of a mercy-dash! Their fridges & freezers have got switched off during the bushfire power failures & as a result, most of the food items that were in them have had to be given to the nearby farmers for use as animal fodder. Even though, we have not been going out during the past two weeks, due to new Covid restrictions in WA & mainly because of our age, (we are oldies, now!), we thought we will take some much needed requisites.
It was a nice visit, indeed! The monastery was as fresh as a daisy! No sign of any scars from the bushfire! As there were not many people, we even had our lunch there!
Later, we also learnt that two members of the community trekked to the northern border of the monastery, after they returned there & found that the flames had come within about 100 to 400 meters at two different spots on that border! What a miracle that the fire didn’t cross the boundary into the monastery premises!

To put into perspective, it was one horrendous bushfire that has devastated large areas of land, destroyed 81 properties & made a large number of people homeless & helpless!

On Wednesday night, 3rd February 2021, the actual flames of the fire have been within very close proximity to the northern borders of the monastery, making the monastery an imminent target for the fire demons!
Yet, by Thursday, the wind was changing & the fire was going away from the monastery location! How did that happen?
No doubt that the chanting done by the good, consistently ethical, practising Sangha from Bodhinyana & Dhammasara monasteries, invoking the Devas (Divine Beings) to help & protect the monastery from the raging bush fire would have had the favorable, desired outcome. The Devas would have acceded to the request by such good, practicing Sangha who are true ordained disciples of the Lord Buddha!

We have to thank Devas for this miraculous deed & be very thankful that we are living in the midst of well practising, Ariya Sangha in WA!