I’m interested to collect people’s favorite fonts that display all the Pali glyphs in the Roman alphabet. I’ve made it in the wiki category so if people like they can edit this post in addition to leaving comments/discussion. [Mods please move if this is not appropriate.

Pali Fonts for the Roman alphabet.

A Pāli font should include all of the following letters

Please create a section for fonts that offer these letters

NOTE: Google Fonts may be out of date. Search for the original authors if needed. 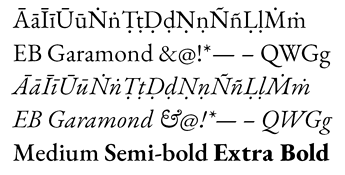 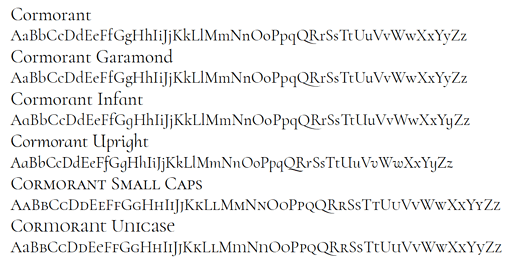 According to Google Fonts

The Gentium Basic font family is based on the original Gentium design, but with additional weights. The family comes with a complete regular, bold, italic and bold italic set of fonts.

The supported character set, however, is much smaller than for the main Gentium Plus fonts. These “Basic” fonts support only the Basic Latin and Latin-1 Supplement Unicode ranges, plus a selection of the more commonly used extended Latin characters, with miscellaneous diacritical marks, symbols and punctuation. In particular, these fonts do not support full extended Latin IPA, complete support for Central European languages, Greek and Cyrillic. Please see the Gentium project homepage for more details.

The Gentium Book Basic family is very similar but has a slightly darker weight. 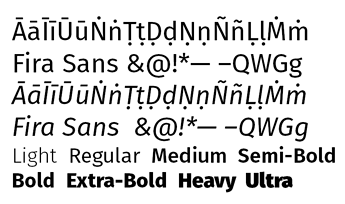 A nice feature of Fira is that it comes in three widths and 9 weights.

However, the Mono face does not include Pali letters.

Originally commissioned for Mozilla, it is now its own project. New development is on a branch called FiraGo

By ndiscover.com
8 weights. Free. Available as a Google Font, but there it is missing the ṁ

More flavorful, but unfortunately lacking the ṁ character, are Alegreya and Piazzola from Huerta Tipografica. … These are delightful for less technical contexts where the lack of ṁ can be worked around: flyers, book covers, or general-purpose text with only occasional Pali.

Threads on D&D related to fonts

Buddhist texts and typography on the Web have changed drastically over just a few years. Web fonts are common now, but web fonts for Buddhism are still kind of rare. It seems the world of Buddhism is still kind of asleep, or at least kind of unorganized (although SC is doing very well). Long ago when the world was young, when IE 6 could still be found, and web fonts were something very new, I wanted a web font for my website that would have all the necessary glyphs for romanized Chinese, Pali, …

5 Likes
Would anyone like to sponsor the fonts for our book publications?
How does one find/download/use Pali fonts for PC.. Dummies level
Good fonts for Roman Pali/Sanskrit with XeTeX?
Snowbird November 21, 2020, 2:44am #2

Usually I would just use Gentium for Pali, but I’ve started to play with Cormorant. It has the most faces of any Pali-complete font I have found. It also has several weights, including light and semi-bold.

Has anyone else used it?

Usually I would just use Gentium for Pali, but I’ve started to play with Cormorant.

I like Gentium too, but the one I have on my computer has only two styles: regular and italic. Do you know if there’s one available that has bold as well?

Do you know if there’s one available that has bold as well?

It appears that the ones on Google Fonts (I updated the OP) have the bold weight but have a smaller character set. I’m sure Bhante @sujato would know more.

one available that has bold as well?

Pro tip: the fonts on Google Fonts are often out of date, so download them direct from the source if you can.

Cormorant is a beautiful Garamond-style font, but note that it’s meant as a display font, so it may be a little delicate for some purposes. (FYI, “Garamond” is the name of a famous type designer from Renaissance Paris, and Garamond fonts are based on his work. The “Garamond” you have on your Windows machine is just one version, and not a very good one.)

EB Garamond is a free and open source implementation of Claude Garamont’s Antiqua typeface Garamond and the matching Italic, Greek and Cyrillic characters designed by Robert Granjon. Its name is shortening of Egenolff–Berner Garamond which refers to the fact that the letter forms are taken from the Egenolff–Berner specimen printed in 1592. In 2011 the Austrian designer Georg Mayr-Duffner released the EB Garamond under the Open Font License. Mayr-Duffner took the letterforms from a scan of a spec... 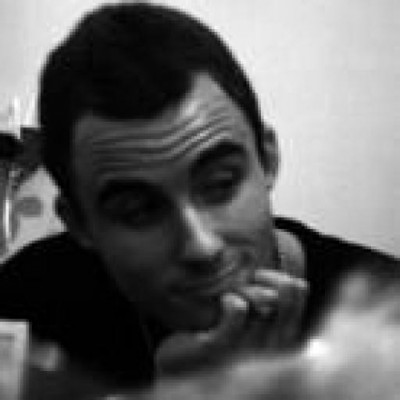 Contribute to octaviopardo/EBGaramond12 development by creating an account on GitHub.

For Gentium, unfortunately the project seems to have been abandoned in a somewhat unfinished state.

The most well-designed and broadly capable free font is the Source Pro family. They are an open source family developed over many years by Adobe. They form a robust, highly legible, and flexible set of fonts. I use them as my default fonts for everything these days.

Get them direct from the repo. 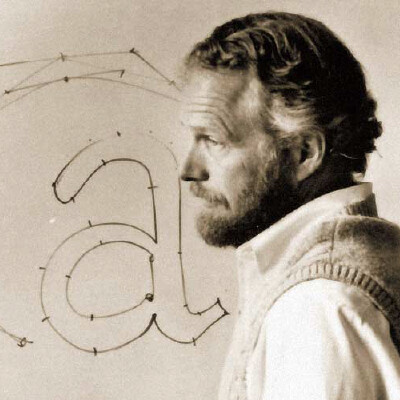 Some background on the design: 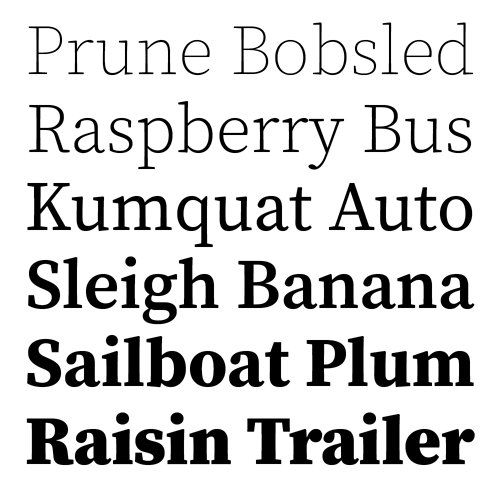 Source Serif is an ideal crystal goblet: not flashy or expressive, yet characterful, rich, and sturdy. Unlike earlier types meant to fit a utilitarian purpose, like Times New Roman or Century Schoolbook, Source Serif includes enough of the eclectic...

Download and install the Heuristica free font family by Andrej Panov as well as test-drive and see a complete character set.

More flavorful, but unfortunately lacking the ṁ character, are Alegreya and Piazzola from Huerta Tipografica. I’ve used Alegreya for several books, and am looking for an opportunity to try Piazzola. These are delightful for less technical contexts where the lack of ṁ can be worked around: flyers, book covers, or general-purpose text with only occasional Pali.

More flavorful, but unfortunately lacking the ṁ character, are Alegreya and Piazzola from Huerta Tipografica.

Thanks for all that Bhante. I knew we would see you here soon

Have you ever tried asking them to add the ṁ? FWIW, those two fonts do seem to have the m-under dot. Do you have an opinion about diy adding glyphs to fonts?

Have you ever tried asking them to add the ṁ?

No, although it wouldn’t hurt. They seem like nice folks!

Do you have an opinion about diy adding glyphs to fonts?

I don’t have a problem with it. Just get Font Forge, copy the glyph over and cut and paste the dot into the right point. Easy peasy. I mean it’s barely an alteration, just moving a dot around.

Bhante @sujato, I was also wondering about your opinion on Noto And Fira. Personally Fira is my go to for a lot of graphic design since it has lots of weights and both condensed and compact faces.

I always feel like the Latin Noto is a bit bland, lacking character, so I haven’t used it much. But there is of course no rival when it comes to character support. I have always wanted to use their Brahmi to offer Brahmi support on SC!

I just visited the site of the designer and see that it is now independent of the Mozilla project. Also that future development is on a new font called FiraGo. It covers more languages and font features, although sadly only one width. It’s comissened by here.com.

Just to update this thread with my own experience: After much experimentation with different fonts and such, OBU now uses EB Garamond as the main font with Noto Serif as a backup for e.g. Chinese characters. The main thing EB Garamond has that others lacked was support not only for the full Sanskrit / Pali alphabet, but also for Vietnamese which is Roman enough to need to be supported by the same font to look good inline (unlike, e.g. ภาษาไทย which can fallback to another font without looking too bad).

An important thing I learned about during my journey was Unicode normalization. Many fonts (including all the Google Fonts, see Bhante’s note above about them being out-of-date) do support normalized (NFC) accented characters but may not support denormalized (NFD) Unicode. Know what format your text is in (normalize if necessary) and make sure to test the version you need. Sometimes ñ ≠ ñ!

Is this what you are talking about? My head starts to hurt the more I read.

Unicode equivalence is the specification by the Unicode character encoding standard that some sequences of code points represent essentially the same character. This feature was introduced in the standard to allow compatibility with preexisting standard character sets, which often included similar or identical characters. Unicode provides two such notions, canonical equivalence and compatibility. Code point sequences that are defined as canonically equivalent are assumed to have the same appear...

Indeed! Yeah. Like many technical topics it’s not nearly as complicated as Wikipedia makes it sound.

Basically, there are two ways ñ can be represented in Unicode: “ñ” or “n+~”

The “ñ” form (where the character is its own separate character, unrelated to “n”) is called the NFC (combined) form and the “n+~” version is called the NFD (decomposed) form. Fonts that support NFD have to know how to combine arbitrary letters (n, o, c,

…) — a hard task! NFC requires having a huge table of precomposed glyphs.

I’m a kindle owner and I’m about to start my journey in Early Buddhism texts. I realized that the fonts of my preference do not support Pali characters, so I found this thread and I started testing the suggested solutions.

For some strange reason, some of them (ex. EB Garamond) do not work well with the books I tried on my kindle paperwhite, so after trials and errors I ended up with the following font which I like and have used in the past:

To be more specific, I used the following modification (the first zip which is without weight and unhinted) for e-ink devices:

Please note that I’m not experienced with Pali, so it’s possible that something is missing and haven’t noticed.

This is another font (one of my favourites), that I believe is OK for what we need:

A new typeface – greater legibility and readability for low vision readers Atkinson Hyperlegible font is named after Braille Institute founder, J. Robert Atkinson.  What makes it different from traditional typography design is that it focuses on...

On the second page of this PDF you can see the supported characters.

Atkinson Hytperlegible has been created in partnership with the Braille Institute and serves a very important role as it increases legibility for readers with low vision.

I’ve read many books on my e-ink reader with it, and it’s maybe the easiest for the eyes font I’ve ever tried (Lexend Decca and Didact Gothic come after that, but unfortunately they lack many features).

Wow! And it looks pretty good too! @karl_lew - Maybe this would be a good choice for Voice?

Maybe this would be a good choice for Voice?

Perhaps. Lexend is VERY readable. I love it. Will it show Pali?

Sometimes we are stuck with the lowest common denominator.

Will it show Pali?

Shouldn’t be here if it doesn’t! But I wonder if there is a tool for checking language coverage. Babble Map would work for something like Japanese. And I think French and German charaters are all covered by the regular Latin fonts. But they don’t have their own language sets.