Dear friends, what follows is an open letter I have written to sum up my response to the Therigatha deception. I’ve designed it as a single-page A4. Please share it or print it as you like! You can download or share it as PDF or HTML, and in the comments I will paste an image for sharing on social media. (Remember to include the actual text for accessibility!)

Imagine if someone were to take a beloved book from the Bible or the Koran, discard 95% of the content, and invent the rest from their imagination. Then it was sold and marketed as sacred scripture, and taught in churches or mosques as if it were ancient wisdom. Well sadly, that’s exactly what’s happening in Buddhism.

It’s hard for me to convey the sense of betrayal and distrust that I feel. I love the Buddha’s teachings more than I can say. Maybe they’re not for everyone, but for me they are everything: they are illumination and wisdom, they are a pure and unfailing friend. And more than that, they are a direct link to the heart and mind of the Buddha and his immediate disciples. This is all we have; once it is lost, the path slips away.

The Therīgāthā, “Verses of the Senior Nuns”

The Therīgāthā is a collection of verses by Buddhist nuns included in the Pali Tipiṭaka, the oldest scripture of Buddhists. It is a unique testament to the spiritual prowess of ancient Indian women.

Buddhists honor our scripture as one of the Triple Gems. We have passed it down with care and precision for 2,500 years and freely share it with everyone in the world. For myself, and for many Buddhists, it is deeply distressing to see it displaced by the pale fancies of a modern writer.

The Poems of Matty Weingast

In early 2020, a book of original poetry by Matty Weingast was released by Shambhala Publications under the misleading title The First Free Women: Poems of the Early Buddhist Nuns. Despite the title, the author has said it is “not a translation”, while the publisher claims “in general we have not positioned this as a new translation”.

Yet the book has been constantly misrepresented as a translation in Shambhala’s marketing, as well as by Weingast himself. It is listed in the Library of Congress as a translation, and endorsed by Buddhist teachers. Reader feedback shows that almost all think it is a translation.

Weingast’s poetry is widely found in libraries and universities, and is taught in retreats and Dhamma centers by people who have been misled into thinking that it is the wisdom teachings of ancient Buddhist nuns.

Here is a typical example showing how little Weingast’s work has in common with the Therīgāthā. This is the verse of Saṅghā Therī from the Therīgāthā (Thig 1.18, translation is my own).

Let alone a translation, it is not an adaptation, a re-envisaging, or a re-imagining. It’s an original poem bearing no more than a superficial resemblance to the Therīgāthā. The clear song of awakening has been replaced by a muddle of metaphors. In my twenty-five years of studying, practicing, teaching, and translating Pali texts, I have never met such a disturbing deception.

In an interview with New Book Network Podcast, the author admitted, “I knew that one way or another, if I was going to do this project, I would be one more male co-opting female voices.”

Despite his qualms he continued, apparently in the belief that by somehow channelling or intuiting the voices of women this would qualify as a translation. This fantasy entitles a white American man to steal the voices of brown-skinned Asian women and erase their achievements.

The way forward: withdraw from publication

Weingast’s project has been mired in deception and appropriation from the very beginning. It is harmful and dishonors the Buddhist tradition. The publisher should withdraw it from publication immediately.

In addition, the customers deserve their money back, as they have been sold the book under false pretences. A sincere public apology is called for, so that institutions and readers worldwide will know what has transpired.

You can help by emailing the publisher, sharing this information, or leaving a review online. Let the publisher know that while Buddhists are gentle and accepting, we will not tolerate the counterfeiting of our sacred texts.

What can I do? (a note from Ayyā Sudhammā and Bhante Sujato)

A volume of original poetry is being sold as a translation of the Therigatha. If you’d like to voice your concern over this, here’s some actions you can take. You don’t have to be an expert: your voice matters.

We are sure we don’t need to say this, but we will anyway: be polite and succinct. Share your perspective, background, and reaction. And most of all, stick to the facts: it’s not a translation, but it’s being sold as one. 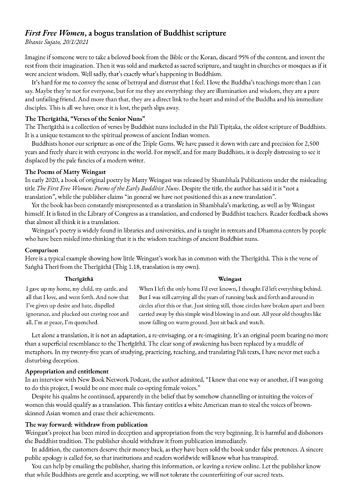 (I’ve updated the files to correct the date.)

Don’t you fear the Steisand effect with such an approach?

Google says that the Streisand effect is when one tries to hide or cover a truth. This is trying to reveal a truth. I imagine a bunch of people will arbitrarily double-down and side with the bogus translation for all sorts of personal and group reasons. A lot of people are biased against the entire enterprise of EBT studies because they see it as innately seeking to undermine their “true religion.” That is just one group of people I could see taking the poet’s side. The Streisand effect in that sense, if it is rightly applied here, is sort of inevitable. Ven Sujato could have said “Cleary’s translation of the Flower Garland Sutra is awful” and I’m sure some people would line up to defend Cleary.

Don’t you fear the Steisand effect with such an approach?

Unfortunately the book is already wildly popular, by Buddhist sutta book standards at least. So It’s not like some obscure blog post hiding out some where that we are drawing attention to.

If people want to knowingly read poems that someone in 2020 made up imagining what enlightened nuns really meant, then that’s on them. But they shouldn’t be misled. And going forward people who investigate should be able to easily find out the truth.

It’ll be interesting to see. So far I haven’t seen it—well except for the publisher—but it’s early days yet.

Twitter would be great for this. But I couldn’t find them on twitter. Are you sure it’s them and not another organization called Shambala?

But Weingast definitely has a twitter account. He was using it just a couple of days ago a year ago to promote his book. (Arggh, I still haven’t caught up with 2021!) 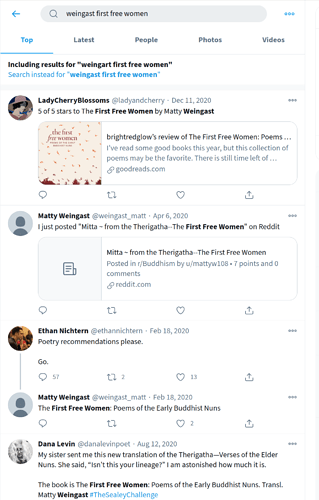 The topmost post on Shambala Publications’ Facebook page is a Milrepa quote entitled “Do Not Edit the Dharma.”

Just thought I’d point that out.

And in all its ironic glory for posterity. 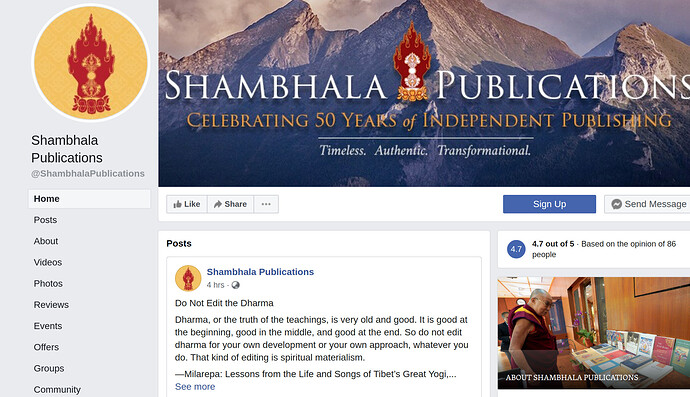 So what’s the over/under on the actual quote by Milarepa being fake?

It’s in a translation by Chogyam Trungpa, a notorious drunkard, and it uses his favorite phrase “spiritual materialism”. I’m betting it’s either invented, apocryphal, or loosely paraphrased at best.

So what’s the over/under on the actual quote by Milarepa being fake?

I’ll give you even odds, but only because I’m trying to be less of a cynic these days.

I commented on that post btw, stating my personal boycott and sharing an image of your open letter, Bhante. If for some reason my comment isn’t visible, I’d enjoy learning that (despite the setback it would create in the aforementioned striding away from cynicism).

I commented on that post btw, stating my personal boycott and sharing an image of your open letter, Bhante.

Yes, I can see it, thanks! Even though i’m not on FB, it seems to be publicly available.

The topmost post on Shambala Publications’ Facebook page is a Milrepa quote entitled “Do Not Edit the Dharma.”

It’s just a clumsy citation. The quotation is actually from Trungpa’s book of talks on Milarepa’s teachings. The poster has given the title of the book but omitted the name of the author, giving the erroneous impression that Milarepa is the author.

We can always rely on you to clear things up, Ven.

It’s just a clumsy citation. The quotation is actually from Trungpa’s book of talks on Milarepa’s teachings. The poster has given the title of the book but omitted the name of the author, giving the erroneous impression that Milarepa is the author.

The levels of meta is head spinning.

It would be if the carelessness weren’t so sad.

The levels of meta is head spinning.

Well, Trungpa’s source for Milarepa’s life would almost certainly have been Heruka’s The Life of Milarepa, which itself is probably largely fabrication, written half a millenium after Milarepa died.

This is what I found: https://twitter.com/shambhalapubs?lang=en. I searched for “Shambala Publications Twitter.”

Well, Trungpa’s source for Milarepa’s life would almost certainly have been Heruka’s The Life of Milarepa, which itself is probably largely fabrication, written half a millenium after Milarepa died.