we (Polish Theravada Foundation) are in contact with two monks, who are trapped in Kyiv right now, Venerable Thithidhammo and Venerable Ratanasila (there are two more monks in Ukraine). We would take care of them here in Poland, we already have a place for them ready, we would support them in every way but the problem is that they are Ukrainian citizens and there is a Martial Law and all men age 18-60 need to stay in the country to fight the oppressor. The Ukrainian border guards will probably not recognize monks as monks, they will see them as potential soldiers, as there is (as far as I know) no exceptions for monks, clergy whatsoever. I am willing to go to Lviv or any other city that I can (and the Ukrainian police will let me, Kiyiv is to close to frontline) and I would be more than happy to take the monks and try to cross the border with them. But what we are worried is that the border guards will not let them pass.

What we thought might be some idea is to cross the border with an embassy vehicle. So we are writing now a letter to a Polish Embassy to help us. Two things though:

Once we finish the letter in Polish, maybe we will translate it into English, so that you might send it to your embassies. Please do tell me your feedback on this. If you want, I can send some pictures of the monks from Kyiv, I hope they wouldn’t mind, but I will ask Bhante to be sure.

TLDR - we are trying to save monks from Ukraine, but we need help to cross a border with them, embassy car could do it. 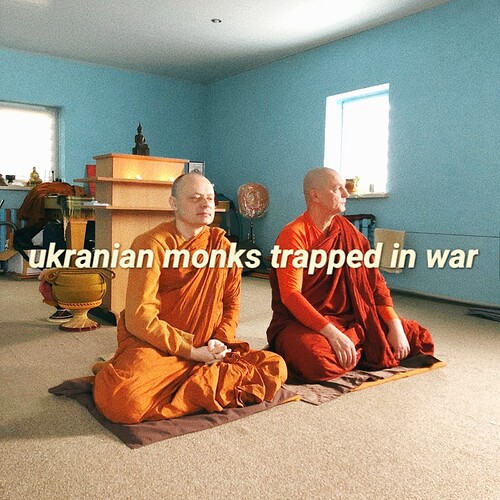 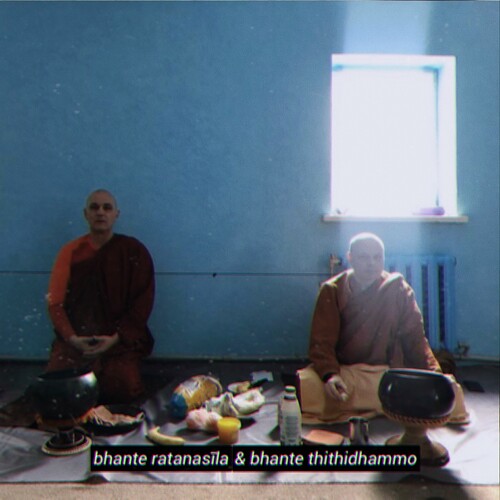 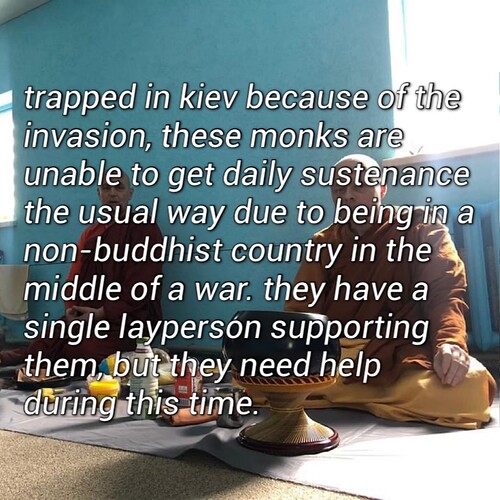 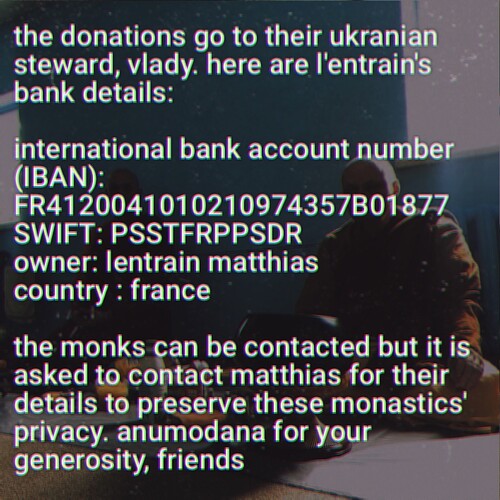 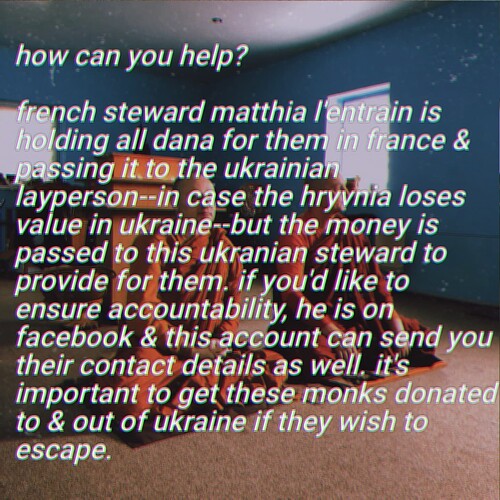 for a bit of background: locals are afraid of the monks because they don’t understand what they are & it is the middle of war-time, so surviving has began to be tough. a local steward, vlady, has been single-handedly supporting the monks, as i understand it. 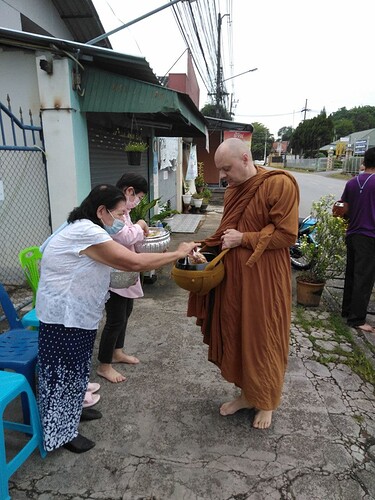 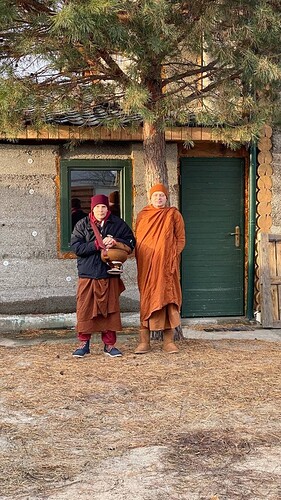 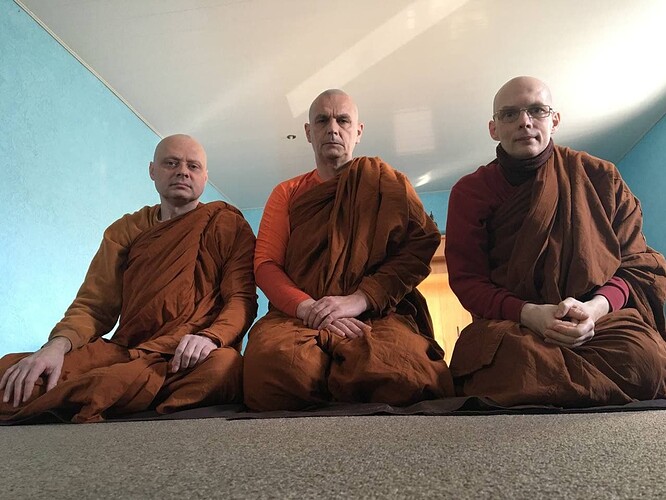 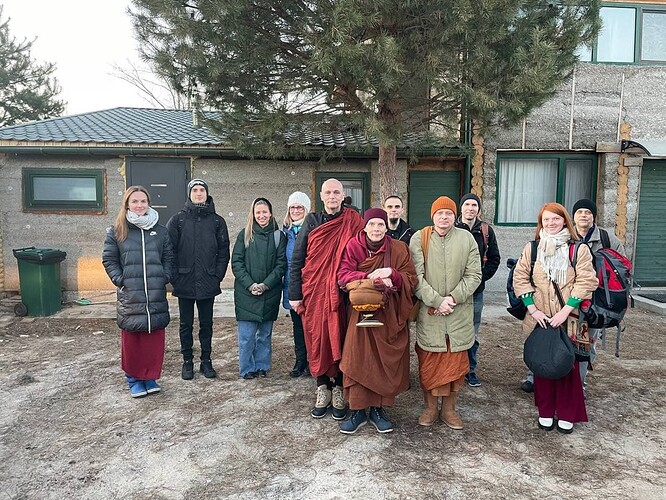 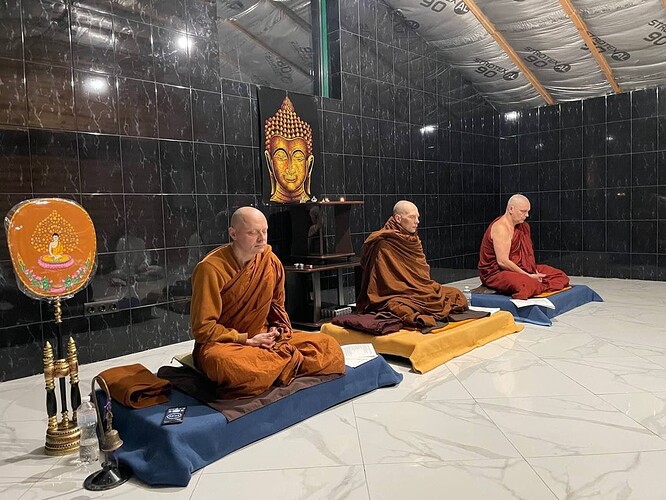 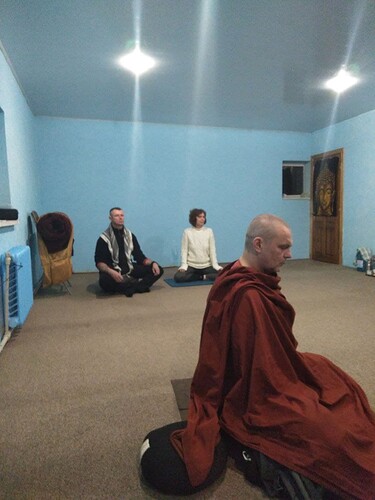 Thanks so much for what you are doing! It’s definitely not a problem according to Vinaya, you are trying to help save the Sangha.

Perhaps the local Sri Lankan and Thai embassies or consulates may be able to help? It certainly wouldn’t hurt to contact them. Even if they could not provide a vehicle, perhaps they could at least give a letter explaining what a monk is and asking for an exemption on their behalf. If there are any Thai or Sri Lankan citizens reading this, I urge you to contact Har-Dao and see if you can obtain the support of your local diplomatic staff in Ukraine and Poland.

I will see if I can find anything else.

Yes, it is a good idea to contact Buddhist countries’ embassies here in Poland. I will definitely do that!

Below is a translation of a letter we send to Polish Embassy in Ukraine, but if anyone would like to copy and maybe add something to the letter and send it to their embassies in Ukraine or Poland, that might help us get those monks out of a war zone! (sorry for any mistakes in English in the letter below)

This letter in on behalf of the Polish Theravada Buddhist community and the Theravada Foundation registered in Poland.

Currently in Ukraine there are several Theravada monks who are Ukrainian citizens. At the moment two of them are in Kiev, they went there before the outbreak of war to renew their passports and visas. As a result of the war their lives and health are in danger.

Buddhist monks in the Theravada tradition have very strict monastic rules, according to which they are forbidden to kill people or any other beings. Nonetheless, these monks are subject to the laws of Ukraine and, consequently, possible conscription into the army. In traditional Buddhist countries like Sri Lanka, Thailand, Burma, Laos or Cambodia, they are exempt from military service, precisely because of the nature of the monastic rules. We would like to enable them to leave Ukraine, bearing in mind their value and the role they play in the Buddhist community.

As a “Theravada” foundation in Poland we are able to take over the responsibility for their accommodation in Poland. The only problem we face now is when they cross the Polish-Ukrainian border. We are afraid that Ukrainian border guards will not be able to recognize them as Buddhist monks, but will see only men capable of fighting, which, of course, they are not.

We are asking for your help and intervention. At this moment we are staying in contact with two monks who have taken refuge in a safe house in Kiev. They are Venerable Thithidhammo and Venerable Ratanasila. We are in the process of searching for two other monks who are somewhere in Ukraine, namely Venerable Narada and Venerable Saranasila. The first two, i.e. Venerable Thithidhammo and Venerable Ratanasila, have decided to move to the west of the country, perhaps to Ternopil or Lviv. We want them to cross the border as soon as possible, without being turned back by the Ukrainian border guards, so that we can take care of them on our territory and transport them to a safe place, which we have already organized in central Poland.

Thank you for your assistance. Your help is very appreciated.

If you haven’t done so already, I’d also recommend contacting the Sangha in Poland.

In the wake of escalation of Ukraine-Russia war, the Foreign Ministry in collaboration with embassies in Warsaw and Ankara, is currently engaged in the evacuation of about 40 Sri Lankan nationals, including two students in Ukraine via the...

The border seems very wide. Is there no areas where the borders goes through forested, wild area?

There was a malaysian monk who threw away his passport in Myanmar after he ordained here due to thinking that he would not need it anymore. He had to walk through forested area to cross borders to walk from Myanmar to malaysia when he needed to come back to Malaysia.

It’s a huge waste of manpower for the whole long border to be guarded at all times, but then it’s war time and unguarded borders might be entry point for invasion.

there is a Martial Law and all men age 18-60 need to stay in the country to fight the oppressor.

I just wanted to say, while it’s obviously a bad outcome, if worst comes to worst and they are forced to stay and enlist, it’s still possible to remain as a monk. I’m saying this, not for the monks themselves, who I’m sure will be well aware of their duties and responsibilities, but for others who are wondering what monks do in such circumstances.

They can put a gun in your hand but they can’t make you shoot anyone. The reality is that most enlistees never actually shoot anyone anyway: for most people, it takes years of training to reliably undo the aversion to killing another person.

There are plenty of roles in such a situation that a monk can perform: caring for people, transporting things, building shelters, as well as the obvious, providing emotional support. Monks have come through war and strife, they adapt and do their best, and sometimes, their presence makes a huge difference for many people. I know Vietnamese monks in Australia who, when fleeing their country and living in horrible conditions as a refugee, still found it in themselves to provide support and comfort for those around them.

The example of resolute forgiveness and non-violence will resonate long after the war is over.

Indeed. My grandfather was a pacifist minister during his county’s revolution. They literally put a gun to his head. He became their tailor.

Har Dao, our friends at STXnext in Poznan have offered help if need be once they are in Poland. Let me know if that’s the case!

Meanwhile they’ve also shared this site, which you may already know.

Bhante, thank you for the Poznań offer - I will contact them if we would need their support - sadhu! We do have a place for the monks to stay, it is the place that was to be a Polish monastery - now it will be a crash course

, but if the monks will come I will probably move there for a while to get everything organized and working according. I am not sure if the monks will want to stay in central Poland for a long time, but we are ready for that, financially and otherwise. And good news is that just now Sri Lankan Embassy replied, they asked for the details of monks (passport scans etc.), and they will intervene - there is a glimmer of hope, that we might actually save those monks! Good on Sri Lankan Ambassador!

The border seems very wide. Is there no areas where the borders goes through forested, wild area?

Not a lawyer, but this may be very bad advice (if it wasn’t already obvious). It’s entirely possible that people who broke the law by leaving the country will face legal problems when they try to later return to Ukraine.

Getting the official advice of a Ukrainian lawyer might be a good investment, especially considering there are several monks in question.

Are there no Thai or Sri Lankan monasteries there they could stay in? It sounds like the biggest issue at the moment is getting the daily almsfood. Obviously I don’t know at all what the situation is like on the ground, but it might be a temporary solution. For that matter, there may be a Christian monastery that might welcome them. It’s not unheard of for especially Catholic monasteries to be friendly towards Buddhist monks.

It seems like they are the “Sri Lankan” monastery in the area, as most of the four monks come from Na Uyana? I may be misunderstanding. But I did ask a monk from Na Uyana & he confirmed that he knew these monks from Sri Lanka.

has Ukraine a Myanmar consulate ? if Sri Lanka and Thailand fails then try Myanmar

@Snowbird - there are no other Buddhist monasteries in the area, Kyiv is surrounded now, even the monks say this is the new Stallingrad. From what they are reporting they do have enough to eat, they have a kappiya, who is helping them, and if need be, we can assist financially to send money to Vlady (the kappiya). The biggest concern is their life, cause this is war, and it is not an exaggeration.

Concerning the illegal crossing of the border, I think this is also against Vinaya, but below is a quote from Bhante Thithidhammo (I agree with him BTW):

We will agree to leave only if there is a 100% chance that we will be officially released. If there is a risk that we, as adult men, will be stopped, and if this is then portrayed as an attempted desertion, this will have a very negative impact on the development of Buddhism in Ukraine and on my reputation as monks with Bhante Ratanasila. All the work we’ve done here for the past five months will be in vain. We will not get to Poland, and we will not have the same support here as before.

furthermore all vinaya rules are just input from the society to Buddha,

if we follow vinaya too closely we would make ourselves difficult

@Alaray Well, adhisīla is monks training, however you wanna call it, rules are meant to be kept, there are exemptions sometimes, but these are Theravadin monks, I am a follower of a Theravada tradition, so this is what we do

Hope you are giving us the freedom to follow Vinaya rules?

Archbishop travels from Kiev to Lviv. If money for petrol is needed let us know. 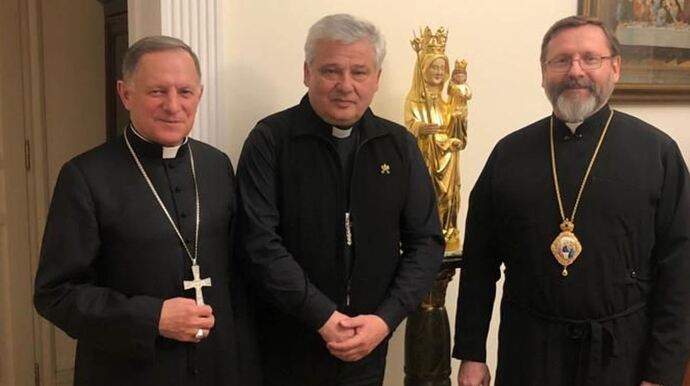 Papal envoy arrives in Ukraine, meets with archbishops in Lviv

illegal crossing of the border

Which Vinaya rule specifically would this break? I’m aware of no rule against trespassing and there are in fact a few allowances for “fleeing an army”