How is SC Offline supposed to work?

A few days ago, I went through the obvious and default procedure to “Download” SC for offline use, shown here. It took like 5 hours, but it all downloaded. Now I’m actually trying to test using it, and it doesn’t seem to work.

While SC is open in my Firefox 58, I simply disable my wifi (my only internet connection my laptop has): 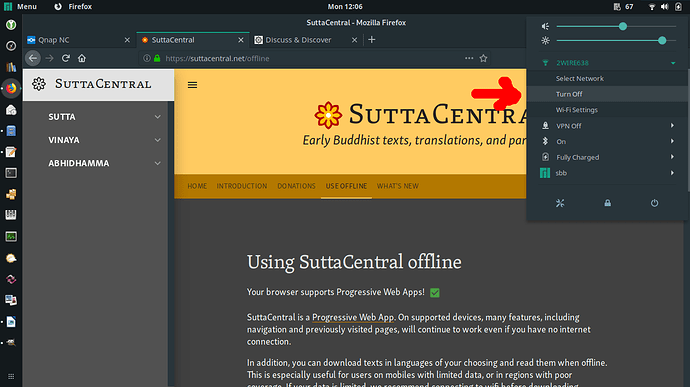 …but then when I surf around to read some sutta, I get a “Network Error” message. Shouldn’t my Progressive Web App goodness from a few days ago magically spring to life and show me the offline page?

When I go back to the Offline page again (after re-enabling the wifi), the Download button invites me to download the entire site all over again! 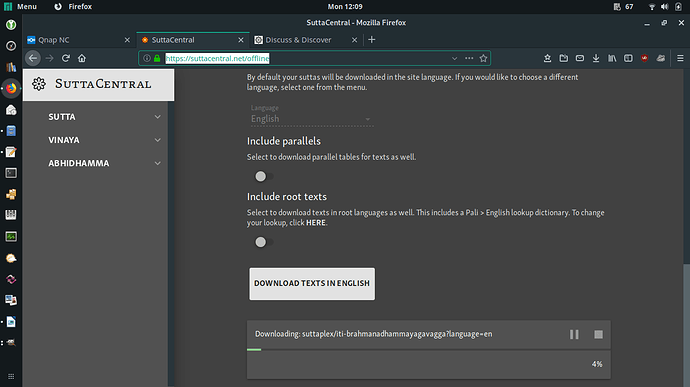 PS: I didn’t add this to the bugs thread, because maybe there’s some non-obvious thing I need to toggle in order to make my PWA goodness turn on (and simply severing my wifi is not enough).

I’ve referred this to @Krzysztof_W to look at. I know there are various bug-fixes that have to do with the PWA that the guys are working on.

We have discussed this issue and a few more updates will roll out in the next few days that will hopefully make it better. This seems to be a problem that is related to Firefox. Hopefully when Firefox updates the browser in May many of the problems we are experiencing with FF at the moment will be history.

I have tried this on a few occasions as well and cannot get it to work. I’m running Debian (Linux) stable and I’ve tried it with the packages provided: Firefox ESR 52.6.0 and Chromium 64.0.3282.119. I’ve tried it with and without including parallels and root texts. After a few hours go by, it seems like it is done, but it just goes back to showing me the “Download Texts in English” box and does not work offline.

Are there any prepackaged zips available to download for some standard platforms? After what seems like an hour, SC is only about 15% done creating the download.

Anyone else using chrome browser on a PC with a full english download of SC offline, want to share the file with us on googledrive, onedrive?

Will these offline downloads work on android smartphones?

I can confirm that Chromium v65 works with SC offline.

I am so very happy.

And is/would be there a possibility of having a package file, as it was in the past, that one could just put on a hard-drive and use on any computer, fully off-line?

And is/would be there a possibility of having a package file, as it was in the past,

I’m afraid that would no longer work because this is a far more complicated site and at least part of the text are not in normal HTML.
Do you have problems with a Chrome browser? You can basically keep running the site in the browser now once the offline mode is activated and the files are downloaded.

Thank you for the reply Ayye.

Mostly I was concerned about this for places where there is no internet connections like some monasteries PC’s or sth.
Maybe there is some way, like finding where this data is downloaded and copying it to others computers that have also chrome.
I am using Opera browser which is Chrome based but it doesn’t work(after restart I have option to download the data again), but I guess on Chrome there would be no problem.

I first selected “Include parallels. Select to download parallel tables for texts as well.” thinking I was just downloading some tables that would give citations. But it appears that it started downloading the Chinese texts. Could the text on that option be clarified? The word “tables” is what confused me. I wanted to know what parallels are available in the Pali, but not the other languages. Since I’m not sure what that option really does, I don’t know what to suggest.

Also, in the triple dot menu on the right, there is an item that says “Use offline” with a PWA icon. Is this a toggle option? I select it and nothing seems to change

Thanks for all the hard work.

Hi all, thanks for the feedback,

Just to recap, as you have noted there are various issues and bugs with getting the full PWA functionality to work just yet. Please bear with us: we are making this for the coming decade, and there be some hurdles along the way! Ultimately a PWA will serve as a website and an app for Android and (if the good folks at Apple bless us with their beneficence) on iOS at a later date as well. But it is very much next-gen technology and involves a lot of nuanced decisions, in an area where our developers are exploring new ground.

Out of compassion for our hard-working development team, I requested that we restrict advanced PWA functions (i.e. download suttas for offline) to Chrome only for now. This is decidedly unsatisfactory, and will be fixed as as soon as we can. But the idea is to sort out the major issues and bugs on a single platform first, and then we can more readily extend it. Development is hard!

Meanwhile, I believe we have solved the problem with overly slow downloads, so it should work at a reasonable pace now.

Good work, and hope things go smoother in the future.

It must have been hard when they first downloaded the suttas on to Ola leaves- imagine the work they had to undertake!

Having any sort of database of information that works gracefully both offline and online is a very hard problem to solve. It has always been, no matter where it’s used. Does anyone remember “Google Gears”, many years ago? That was an attempt to impliment online-offline functionality such as this (keeping an offline cache of data), and it failed. Google pulled the project.

There are several other projects out there to so something like that, and usually they fail or progress at a snail’s pace, and they often succeed only because some ultra-rich corporation (like Google) can throw an army of highly-paid ultra-nerds at it, long enough, until it works.

Maybe there is some way, like finding where this data is downloaded and copying it to others computers that have also chrome.

I see. You want to have something that is not only offline on your own computer but something that can be transferred to other computers as well. That’s a good point and I will keep it in mind.

I wanted to know what parallels are available in the Pali, but not the other languages.

Also, in the triple dot menu on the right, there is an item that says “Use offline” with a PWA icon. Is this a toggle option? I select it and nothing seems to change

This is just a link to the page https://suttacentral.net/offline. If you are already on that page, nothing will happen. But if you are on any other page, that link will take you there.

When you also have the option: Include Root Texts selected, it will also download all root texts in Pali, Chinese, Sanskrit, etc.

Oh, sorry. I did have that one checked the first time I tried. It didn’t occur to me that they were root texts. Hate to make things complicated, but don’t you think the majority of people who want the pali texts only want the pali texts?

This is just a link to the page SuttaCentral. If you are already on that page, nothing will happen. But if you are on any other page, that link will take you there.

Oh! In that case it should say “offline use.” Or more clear, “offline usage”. Otherwise it is like the item below it “use dark theme” When I clicked it I expected it to change to “Use online”.

I’m on the latest Chromium but a build without sync, widevine, nor webrtc.
https://chromium.woolyss.com/
Are any of these dependencies? I’m getting the install Chrome advisory on the “use offline” page.

Yes, me too, I reported this the other day! It’s a bug in sniffing user agents, I think, and it should be fixed before too long.

Our deva just tested this on Chromium and it worked fine.
What version do you have?

I’ve confirmed I’m a fool. Updated browser today, looks like the download is going now, I’ll let you know how it goes.

Woah, that was quick. Looks like everything is working as it should now! Disconnected wi-fi and was able to load up a sutta.