As far as I can tell the Pali very clearly says Āpaṇa, and indeed, the next section of the English translation uses Āpaṇa, too.


I don’t know if it is to interfere with the contained integrity of the translations to alter either case.

Thanks @Aminah. I’ll look at it when I get back behind my PC next week.

Super! One other thing I forgot, is that the language options on the side menu (under Navigation) doesn’t seem to work for the Khandhaka texts.

That’s strange. I just tested it but it works fine for me. What OS and browser are you working on?
I take it you meant the switching between the various translations of the same text (Navigation - languages)

Yep, that’s exactly what I meant. The alternative languages in the side bar do not come up, in the Navigation section. Hmmm. Stoke of the chin! I’m using Linux Mint & Firefox, however, the reason why I’m not sure this is the issue is because for other texts switching languages works fine.

Interesting. I work on Ubuntu/Chrome and that works fine but on Firefox I get the same problem, but for all the texts. 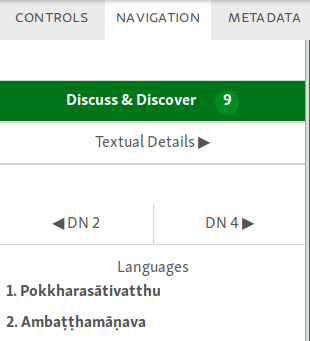 According to the “inspect element” the language options are there, I just cannot see them.
I don’t have time right now but will look at it when I get back.

As far as I can tell the Pali very clearly says Āpaṇa, and indeed, the next section of the English translation uses Āpaṇa, too.

The pali says “aṅguttarāpo”, so I guess that is OK. (https://suttacentral.net/pi/pi-tv-kd6/-1)

The first error I will correct when I get back. That’s clearly a typo.

Thanks for updating us on any errors you find!!!

Applause to your diagnostic skills!

As an example of where it works: 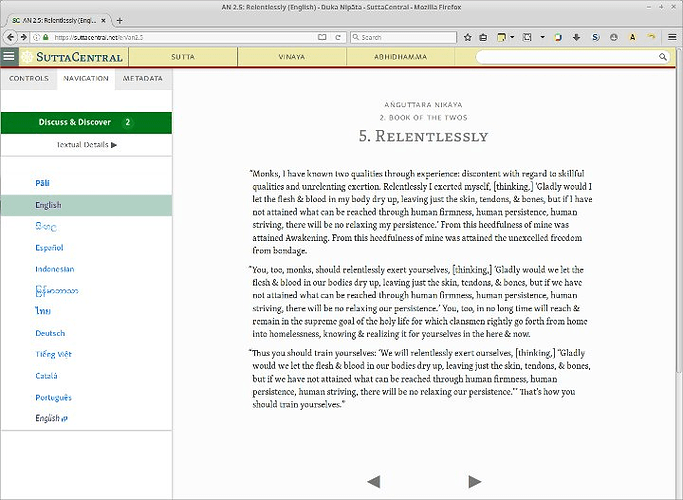 Although I can’t get back to the previous/next sutta option in the side bar once I do click on ‘languages’.

As for Kd6; whoops, my apologies, I’ve had to conclude that I looked at the wrong section when skipping between the texts and am slightly hindered by the fact that it all looks like utter gibberish to me!

Very sorry for wasting your time.

This is a complicated one and maybe @sujato and @blake can have a look at it too.
I tested it on W10: IE, Chrome and Firefox, Ubuntu: Chrome and Firefox and Android: Chrome and Android browser.
It works on all browsers except Firefox. Problem is the same overall: Firefox does not seem to use the details / summary tags in the same way as other browsers and it seems to be a known problem if I google it.

What do we do? Wait until Firefox catches up in newer versions/updates or try to change our coding to match Firefox?

I just checked in caniuse.com, and it says that FF supports details/summary. Some browsers do not support it, incl. IE 11, edge, and opera Mini. (I just noticed that IE 11 and Edge combined have the same market coverage as Opera Mini. wow.) But it seems that the problem is not the support per se but the manner of implementation. Can you give me a link to a discussion of the problem?

As a general rule, I would say that we should stick to valid semantic HTML as much as possible, and hope that the browsers catch up. At the same time, we should avoid breaking any major functionality.

In an edge case like this, it would be good to first check the Google analytics data and see if we can determine how often this feature is actually used. Unless of course its a simple fix, in which case just go ahead.

I also checked caniuse but that does not mention in which cases it might be implemented differently. For instance on the page www.suttacentral.net/nl, Firefox uses these tags just fine.

Here is a possible fix: http://tyleruebele.com/weblog/details-shim
I tested this on Firefox in inspect mode and it did help somewhat, but still had other problems (i.e. the language tag being in the wrong place), but I did not have a real good look at it.

I can probably find out but it will take me a long time and I don’t want to put too much time into it right now.

Sure, best just file it as a bug for now.

Hope is a treacherous emotion.

OK … have a look now. Looks slightly different but at least it works on Firefox too. Tested OK on Android SM.
I placed a div block around the details/summary tags.

@Aminah … can you have a look if it works for you too?

Do you know what the actual issue is? Why doesn’t FF like what we had before?

We had attributes on the details tag, which somehow prevented it from adding the “open” tag. But also, it did not want to do the positioning in between other div-blocks so it placed the whole lot underneath.

So now the attributes are moved to the new div-block that it is in.

Huh, okay, good to know. Thanks for the fix.

If you’re happy with this I close the issue in github.

Neat! Works for me. Thank you.