Lifespan of Gods who are Non-Returners

Having destroyed the five fetters they are said to be spontaneously reborn with a mind-made body.

What is their lifespan?

The charts found on this page give some numbers…

Realms of Rebirth Taught by the Buddha : Reading the Buddhist Scriptures of...

Although the Buddha never used charts as visual aids when preaching, we can sometimes benefit from seeing the teachings laid out in a table. These three charts give a perspective on the Buddha’s teachings on the realms of rebirth. Basic Realms of...

Sadly, the charts don’t give any citations on where this comes from.

According to an7.55, it varies with the size of one’s heap of leaves

I wonder how long they stay there in relation to the duration of a Buddha’s dispensation and the last birth of a Bodhisatta who is currently in the Tusita realm.

A kalpa would seem to be a word for aeon here because the chart lists The Vehapphala devas to be of 500 kalpas and the an4.123 has them;

In the Maha-samaya Sutta: The Great Assembly

Then to four devas of the Suddhavasa (pure Abodes) brahma world, this thought occurred: “The Blessed One is living in the Mahavana near the city of Kapilavatthu in the province of the Sakyans with a great retinue of monks, all of them arahants, and five hundred in number. Devas are frequently assembling there for the purpose of seeing the Blessed One and the bhikkhu-sangha. It is well if we were also to repair to the place where the Blessed One is, and each of us recite a stanza in his presence.”

I am curious about these particular devas and non-returners in general, were they non-returners and if yes then from a previous dispensation or not? Do the Non-Returners possess the knowledge of destruction of taints while the lower realms are without and waiting for a self-awakened Buddha? Furthermore are there non-returners in those realms when the Bodhisatta takes his last birth?

I always thought that the world systems were without the knowledge of destruction until Bodhisatta attains it. However if there are non-returners with such long lifespan and the next Buddha-to-be is currently in Tusita which has a supposedly shorter lifespan than those of the Pure Abodes, then it would seem that there is something i am missing, have mistaken, am confused and unable to understand.

The beginning sections in Chapter 5 of Venerable Bodhi’s A Comprehensive Manual of Abhidhamma go into some detail on lifespan in different realms. The section that pertains to your question is below. These are astronomical numbers. Even the first degree of devas, those of the Four Great Kings, have a lifepsan of 9,000,000 years which is already unimaginably long. 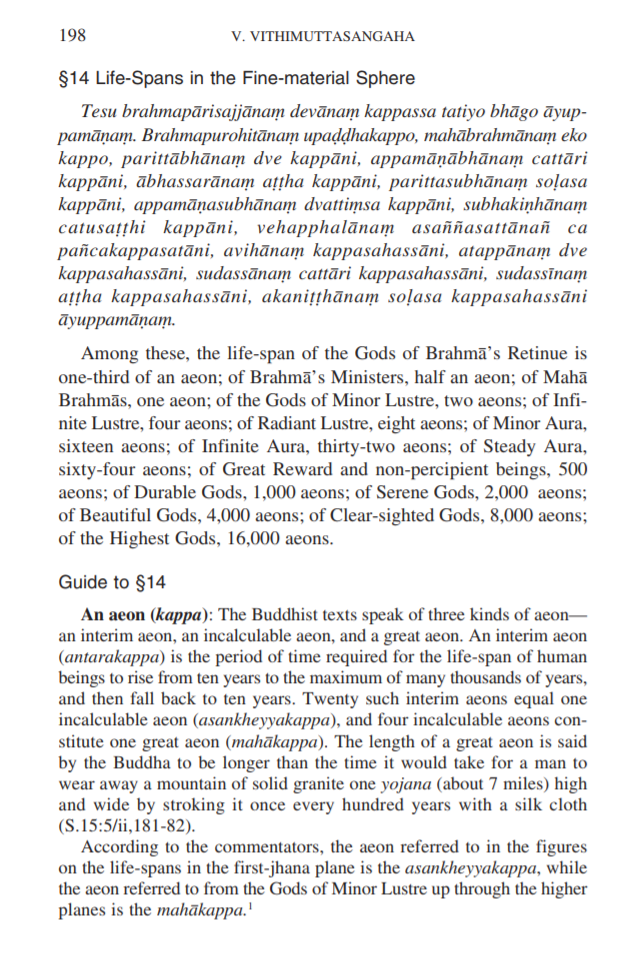 Yes, it’s possible. We hear of a non- returner from the time of Buddha Kassapa seeing the Gautama Buddha!

Do the Non-Returners possess the knowledge of destruction of taints

That particular knowledge is one only arahanths posses, having directly experienced it. If you mean to ask do they know how to become arahanth, it seems likely having heard it from several buddhas.

I guess the question is why is the duration of a single Buddha’s dispensation decided by what takes place on Earth. I suppose it’s arbitrary, but human birth is precious in that it’s said to contain equal amounts of pleasure and suffering. This enables the being to understand suffering and pleasure - without which it’s difficult to make progress. The human realm is the best place to teach, to make quick progress relatively!

It’s said that the devas are happy when they hear one of their people were reborn as a human! I guess the relative suffering in a human life must be short, to them and well worth it. I thought that a human life as when compared to a devas life must be like when we see someone come and go, yet we live on.

That particular knowledge is one only arahanths posses, having directly experienced it.

i was referring to cessation of perception and feeling as it is referred to as destruction of taints and the seeing with wisdom in mn31;

Here, venerable sir, whenever we want, by completely surmounting the base of neither-perception-nor-non-perception, we enter upon and abide in the cessation of perception and feeling. And our taints are destroyed by our seeing with wisdom. Venerable sir, this is another superhuman state, a distinction in knowledge and vision worthy of the noble ones, a comfortable abiding, which we have attained by surmounting the preceding abiding, by making that abiding subside. And, venerable sir, we do not see any other comfortable abiding higher or more sublime than this one.”

“Good, good Anuruddha. There is no other comfortable abiding higher or more sublime than that one.”

We hear of a non- returner from the time of Buddha Kassapa seeing the Gautama Buddha!

is there a sutta reference for this?

Perhaps someone knows where it is said that the next Buddha will take his last birth after passing away from Tusita wherein he currently abides?

…with this story Dhamma doodles 😁