Linking together the Bhikkhuni and Bhikkhu rules which are the same

It would be helpful if one could jump from the Bhikkhuni rules to the Bhikkhu rules which are shared. Perhaps going as far as to link together rules that are similar with minor variations.

You can to some extend as they are marked in the parallels list.
So if you go to Parajika 1 in the Bhikkhu Patimokkha: https://suttacentral.net/pli-tv-bu-vb-pj1, the parallels list also lists pli-tv-bi-vb-pj1. However, because those Bhikkhuni rules are the same, there is no Pali or English translation for them.

This shows the various overlaps between them but are not marked as parallels. Maybe this is something we should consider doing. Bhante @Sujato, what do you think?

That’s what the parallels are.

various overlaps between them but are not marked as parallels

Most of these are in fact marked as parallels. The ones that are not marked as parallels are, from what I can see, cases where the rule covers a similar topic, or where there are related discussions in the Khandhakas. I’m not sure that the first kind of similarity can really be dealt with by data parallels: how do we limit the scope once we admit “thematic similarity” as a criterion? On the other hand, in the cases where specific rules have technical relations with passages in the Khandhakas—such as rules on expulsion for wrong view—then they could be a certain kind of parallel. perhaps “retelling”? Or perhaps a new kind of parallel?

Another issue to be considered is whether we can integrate the Chinese Khandhakas in such lists.

The ones that are not marked as parallels are, from what I can see, cases where the rule covers a similar topic,

This would be the case for instance between Bhikkhuni Parajika 5 and Bhikkhu Sanghadisesa 2.
Maybe a new class of parallel for such cases? I think for comparison these things are quite important to be able to look up.

On the other hand, in the cases where specific rules have technical relations with passages in the Khandhakas—such as rules on expulsion for wrong view—then they could be a certain kind of parallel. perhaps “retelling”? Or perhaps a new kind of parallel?

I think “retelling” does not really cover it. This is more reserved for when later texts retell a story from the earlier texts. I think either “resembling” or a new class for such cases, specially found in the Vinaya.

Another issue to be considered is whether we can integrate the Chinese Khandhakas in such lists.

We have no parallels between the Chinese Bhikkhuni Vibhanga and the Chinese Khandhakas so somebody would have to come up with a list similar to the one I posted above.

Sorry to reactivate such a old thread but I’m hoping that the issue could be revisited.

Consider this user profile: Someone who is not familiar with the Bhikkhuni Vinaya is trying to educate themselves by reading articles on line. They see a citation for Bi Pc 109 and they want to look it up. This is what they see:

For someone not familiar with the notion of parallels, it would be reasonable to conclude that there was no English translation for the rule and they might give up. When they are confronted with this situation several times they may give up trying to educated themselves about the Bhikkhuni rules because in their experience there are no translations for many of the rules. “What’s the point?”

But then lets imagine that they do, out of desperation click on the parallel link (which doesn’t look like much of a link, but we can let that slide). This is what they see:

I’m not clear on what Bhikkhu Parivāra Pācittiya 13 is there. It is not an active link to a translation. It appears that there is a link hidden underneath the text (you can right click and select open link in new tab), but it is a link to suttacentral.net/pli-tv-bi-vb-pc109/pli/ which doesn’t exist.

At the very least it should be a real link to Bhikkhu Vibhanga Pācittiya 13.

I totally get that this is a complicated problem. However I think there is a reasonable solution that shouldn’t be ignored simply because it’s not a perfect solution.

Since the Pali names of the rules for the Bhikkhunis can be reasonably inferred, I suggest creating a very bare bones root json file for all of the Bhikkhuni rules that are “the same” as Bhikkhu rules. It could have the name of the rule in Pali and then a blank segment. This would allow translators to include a line stating something like

The text of Bhikkhuni Vibhanga Paccitiya 109 is not included in any Pali manuscripts. It is the same as Bhikkhu Parivāra Pācittiya 13.

I’m bringing this up because of an ongoing discussion I’m having about a project to create an ebook of the Vinaya translation from the Bilara data. So regarding this, I’m wondering if Vens @Brahmali , @Pasanna or @Khemarato.bhikkhu could comment if my suggestion above would help with that.

Thanks for bringing this up.
Until I was discussing Bhante Snowbird’s ebook I just assumed that the bhikkhuni rules were complete and as easily accessible as the bhikkhu ones. I’d even referred several novices and aspirants to SuttaCentral to have a look. One told me she’d looked and that all the rules weren’t there. I assumed she’d just looked in the wrong place! Surely not. To be quite honest, I find Tom’s TheBuddhasWords a lot easier and more accessible that SuttaCentral for the level of study I and most junior monastics and aspirants do (and it works offline).
This is where it’s not clear to me who SC’s audience are. There are beautiful plain English translations of Suttas and Vinaya which would give the impression the site is to be usable for beginners, but the process of actually finding a sutta requires some academic understanding well beyond most junior monastics let alone your average new buddhist interested in what the Buddha actually said.

I don’t want to criticize the overall interface of SC in this thread, but instead just want to find some acceptable way to make the Bhikkhuni rules more easy to study. Which I’m sure is something that everyone can support. It’s just a matter of the trade offs. But from my perspective, I think there are few.

The way I ended up addressing that issue was to just copy over the relevant Bhikkhu rule into the Bhikkhuni rules with a note identifying it. e.g. The Bhikkuni Nissaggiya Pācittiya 24 = Bhikkhu NP22. 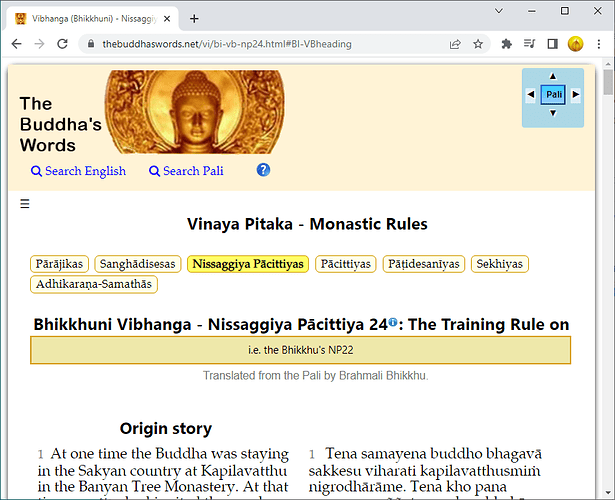 I’m not sure that way makes sense in the SC platform. But I agree it is one way to do it. Thanks for your work!

Forgive me, but I have a dumb question.

Why not just upload an English translation to the proper place viz Bhikkuni Vibhanga Paccitiya 109? It should not take much time given that it is almost identical to Bhikkhu Parivara Pacittiya 13, which has already been translated. I get that the same/ similar translated text will exist in two places, but surely that is the same situation as in the Pali?

surely that is the same situation as in the Pali?

Nope. It doesn’t exist in the Pali. That’s the heart of the issue.

Ahhhh… now I get it.

Sounds like your reasonable solution is the best way forwards, Venerable!

I know that you both, @sujato & @Brahmali, might be traveling right now, but I wonder if you have thoughts on my suggestion.

Thanks so much @Snowbird! This is a good point, which really needs to be rectified. And I am quite happy with the solution you are proposing. Are you able to implement it, too?

In the long run I imagine we might want to alter the common rules so that they fit into the bhikkhunī Vibhaṅga. It’s only a matter of transposing the grammar from masculine to feminine. In theory it’s straightforward; in practice there are bound to be all sorts of complications. Still, I expect the process not to be too difficult.

One minor point: the titles of the bhikkhunī rules can actually be found in existing manuscripts, namely the Dvemātikā Pali, which probably was part of the Canonical Vinaya at some point, before it was moved to the ṭīkā.

Are you able to implement it, too?

Sure, I think. If Bhante @Sujato agrees. I don’t know what the ramifications would be on the site, though.

That’s actually something that I personally wouldn’t support in the Pali. Is there any indication that a text like that ever existed? I thought that canonical sources tell us that the bhikkhunis were to simply follow certain rules that already existed for the monks.

If someone wanted to create a text in English with the genders changed so as to support the samana life of the bhikkhuni sangha, that would be one thing. But creating a novel Pali text feels like an overstep.

Is there any indication that a text like that ever existed?

Well, they certainly transposed the actual Pātimokkha rules, which means they interpreted the Buddha’s injunction as an allowance to change the grammar. Since the Buddha says the nuns should practice the rules as the monks do, it seems reasonable to assume that this alteration would also be acceptable for the Vibhaṅga.

But I am not sure now if it is required. As you say, it would seem sufficient to do this in the English text, which would be even easier than changing the Pali. Bhante @Sujato, should I put this on my to do list?

This is getting too far from a translation, and both philosophically and technically it wouldn’t fit with SC. Bilara works segment-to-segment, and the segments just don’t exist.

I’d suggest making sure we get the main Vinaya translation done and dusted, then maybe publish an “expanded” edition separately. We’d be happy to link to it.

Which, BTW, I was hoping to get around to working with you once the vassa starts, to ensure we can solve any outstanding issues with the Vinaya.

@Brahmali this actually came up re the bhikkhuni parajika rules in our publications project. tl;dr: what do you think of adding a single sentence noting the parallel, something like:

This rule is the same as Bhikkhu Parajika 1.

Basically our process assumes that there will be some content, and if there is no content it complains. So a single paragraph following the heading would solve this, and be useful for the reader, to.

Had you noticed my previous post? My idea was to do what you mention and then have the citation in that one sentence be a hyper link.

I believe Bhante @Brahmali had already agreed with that.

This rule is the same as Bhikkhu Parajika 1.

It might be good to put a note there that parajika 1 is different for bhikkhus and bhikkhunis, and quote the bhikkhuni rule.

(The other shared rule where this solution doesn’t work is nissaggiya pacittiya 2 / 14, but the difference is more minor.)