On the meaning of yoniso

The rendering of the Pali term yoniso poses a number of difficulties, some of which which I have discussed in previous posts. I will mention again the major issues, together with a new text that well illustrates the main point.

It is from the root yoni, meaning “womb” and by extension “source”. It seems that the non-Buddhist sources only know this meaning, and that the usage in Buddhism is quite distinct.

It is an ablative adverb functioning as an indeclinable (cp. sabbaso, bhiyyoso), conveying the sense “by way of cause, cause-wise”. However, it is applied very broadly in the Buddhist texts, and moved towards having a more vague sense of “careful, wise, appropriate”, which is how it usually translated.

While this is not incorrect, it has long seemed to me that this lost some of the clarity of focus found in the early usages. Reviewing its occurrence over many passages, it seems to me that it is still strongly associated with passages dealing with causality, and that the sense of “in accordance with cause and effect” is quite prominent. Of course, this is, from a Buddhist point of view, ‘wise, careful, appropriate”, but it is more specific than that.

I just translated MN 126, which gives a series of similes that show the causal use of yoniso. Several everyday activities are described, each of which is given first in a negative form, showing the silly means that someone might use, which obviously will not produce the result they seek. For example, a person seeking oil tries to press it from sand; someone wanting milk pulls on a cow’s horn; or someone wanting butter churns water. Given that these absurd scenarios are mean as similes for the foolishness of wrong-headed spiritual practitioners, I can’t help thinking they would have raised a chuckle among the monks.

Each of these is described as ayoniso, just as someone practicing with wrong view, etc., will never see the fruits of the path.

Next the text gives the right method of doing each of these, showing how to extract oil from sesame, churn milk to get butter, and so on. These are all yoniso, just like a practitioner who applies right view, etc.

It seems clear to me that the sense of yoniso here is the causes are in line with the effects. I.e., the acts you perform actually produce the results you’re looking for. So the suitable English translations would be “rational” or “reasonable”.

28 Likes
Discernment challenge 😎
Was science invented in India 2500 years ago? Is Buddhism a science?
Yoniso manasikāra - The Many Faces Of Wise Reflection
Gabriel_L May 8, 2017, 2:51am #2

So the suitable English translations would be “rational” or “reasonable”. 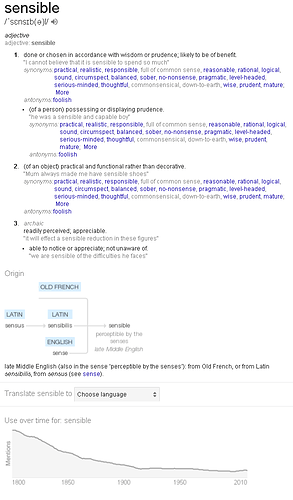 That seems to make more sense than ‘irrational’ or ‘unreasonable’ which have very different connotations to me than I think the intended meaning.

Nonsensical? Certainly trying to get milk from a horn is nonsensical but don’t know if that’s the best.

As an antonym of sensible in the sense of ‘reasonable’, insensible would have been fine from the mid-16th to the late 18th century.

1533 Frith Answ. Rastel. Wks. (1573) 27 Are ye so childish and insensible to imagine that ye must yet go through Purgatory, sith ye are already without faulte in his sight.
1598 R. C. Godly Form Hovseh. Govt. Ep. Ded. 4 Dumbe & insencible beasts.
1634 Sir T. Herbert Trav. 75 His feare and amazement became greater, and insensible how to qualifie these bloudie stirrings.
1693 Humours Town 15 In the Conversation of Brutes, and the Prospect of insensible Animals.
1794 G. Adams Nat. & Exp. Philos. IV. xi. 486 People stupid and insensible, illiterate and incapable of learning.

Nowadays, however, senseless or silly would be the more usual antonyms.

Bhante, in the context of AN 12.4 which I’m currently working through, then yes rational or how about logical?

Actually, that’s not bad. But still, it doesn’t really have the connection of cause and effect.

Not that it is strictly relevant, but I am using “sensible” for viññū, as part of an attempt to reduce the overburdening of the poor little word “wise”.

Maybe, although perhaps it’s too specific?

I am influenced in this by the use of the word irrational in anthropology generally, where it is, or was, used to refer to superstitions, black magic, omenology, astrology and the like. It seems to me that much of the Buddha’s approach in using this specific term was pointing to exactly the same problem: that much of what passes for religious practice depends on the “irrational”, on blind, unreflective, and unthinking approaches, with no consideration for how the practices one does actually connect with the results.

Thank you Bhante for your very clear answer and yes I agree rational and irrational does give that feeling.

but…what about that phrase “going back to the source”… while I’ve heard “womb” mentioned, I’ve always thought of it as “the source” and the opposite of what the asavas do.

Not foolish at all! I have tried various renderings like this, but the problem is that it’s used in such a wide variety of settings, you need something with sufficient flexibility both syntactic and semantic. This is, I think, why most translators end up with something vague like “careful” or “wise”. So we need something a little more specific, but not too much.

how about the bit stronger stronger…
ayoniso = witless ______ yoniso = smart?

Oh, this this reminds me why I went for rational over reasonable: because reasonable often means “okay, not too bad”, so it raises disambiguation problems. This is another of the subtleties that bedevil translation choices!

I’m sure you have the various connotations you have to cover in mind, but don’t you think that the one with yoniso manasikara is someone who has, how to put it, a developed spiritual skill, a wise understanding? ‘rational’ is in the worst case also an unsympathetic brainiac.

No, it doesn’t have that kind of exalted sense. Look at this sutta: it’s just talking about people who are able to hold a rational conversation.

This is where we have to be careful to avoid overloading words with meaning: words aren’t profound, sayings are. “To be or not to be” is one of the most profound sayings in the English language!

‘rational’ is in the worst case also an unsympathetic brainiac

Any word can have a negative connotation, wise guy!

haha, next to the ‘like’ button we should also have a button for an ironic squint

I think this is a very pertinent question as yoniso goes to heart of Buddha’s Dhamma.

Considering the range of settings yoniso has been used, I would suggest lowering the bar a bit!

It is used for example when contemplating one’s food, before eating it. I think it simply means to reflect/think about something, before doing it. Carrying out rites and rituals (Silabbataparamasa) would be an example of when this doesn’t happen.

Thinking, asking the difficult question ‘why’ may not have been common before the Buddha appeared on the scene. It does go to the root, the reason for one’s intentions and taps in the (wrong) view as the case may be. It then becomes the cause (along with the voice of another- paratogoso) for the formation of Right view (samma ditti).

I had thoughts about two other words in MN126:

Āsañca anāsañcepi - I got ‘like’ and ‘dislike’ -whether they like or dislike the holy life… from the Sinhalese translation.

Adhigamāya- Is attainment -not just a vague result or fruit. https://suttacentral.net/define/adhigama

Actually, that’s not bad. But still, it doesn’t really have the connection of cause and effect.

I agree and wouldn’t actually use sensible vs. senseless myself.

I used to like Ñāṇamoli’s reasoned vs. unreasoned. Nowadays I prefer grounded vs. groundless.

Yes, I agree. Or it is answered in trivial ways.

practice which is not reflected upon

Again, this would work sometimes, but not always, and there are more specific words for this; in fact in the reflection on food, the word for “reflection” is “patisankha”.

That’s not really what it means here. The sense is close to the English “hope”, but here it refers to making a specific wish or aspiration.[quote=“Mat, post:16, topic:5193”]
Adhigamāya- Is attainment -not just a vague result or fruit
[/quote]

It has a range of meanings, as evidenced in this very sutta: it refers to “extracting” oil, “getting” milk, “producing” butter, and so on. Normally I translate as “achieve”, but that doesn’t quite work here.

I used to like Ñāṇamoli’s reasoned vs. unreasoned. Nowadays I prefer grounded vs. groundless.

I have tried grounded, actually, and it works well, sometimes!

Reasoned, maybe could work. But it’s instrumental, so do we say, “in a reasoned manner”? Idiomatically, we want to say “reasonable”, but as noted before, that often means “just okay”. There might be a way to make it work, but I haven’t found it.

That’s not really what it means here. The sense is close to the English “hope”, but here it refers to making a specific wish or aspiration.

Doesn’t adittana mean aspiration? Maybe there can be more than one word meaning the same thing.

Adhigamāya- Is attainment -not just a vague result or fruit

It has a range of meanings, as evidenced in this very sutta: it refers to “extracting” oil, “getting” milk, “producing” butter, and so on. Normally I translate as “achieve”, but that doesn’t quite work here.

Thanks for that. My adhigama has been suitably stretched!