(Tip: use the “find in page” function on Chrome and type:“Gajaṅgala” to quickly find the part i am refering to)

The question i would like to ask is does anyone have any slightest idea (like any vague approximate clue) how outlying district is find on the modern world map today
For example: is Myanmar or VietNam considered to be outlying district???

Mv.V.13.12 defines the precise borders of the middle Ganges valley: Mahāsālā on the east, the Sallavatī River on the south-east, the town of Setakaṇṇika on the south, the village of Thūna on the west, and the mountain slope of Usīraddhaja on the north. Unfortunately the identity of these place names at present is largely conjectural. Notes to BD identify Thūna with Sthānesvara, and Usīraddhaja with Usiragiri, a mountain to the north of Kaṇkhal. For the others, see B. C. Law, Geography of Early Buddhism.

I am quoting from Divyavadana. You can consider it material taken from the vinaya of Sarvastivada school.
Incidentally, it also mention bathing.

THE Lord Buddha was staying in the city of Śrāvastī at the Jeta Grove in the park of a man named Anāthapiṇḍada (Almsgiver to the Poor). Meanwhile in Aśmāparāntaka,85 in the village of Vāsava, there lived a householder named Balasena

“I give my permission as follows,” the Blessed One said

I hope the picture is clear enough.
Asmaparantaka is on south west, the region of Aparanta and Asmaka 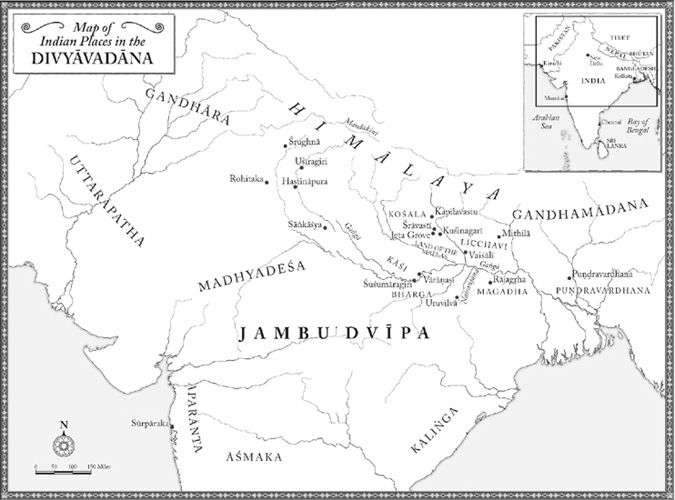 Then the venerable Upāli asked the Lord Buddha: “Bhadanta, the Blessed One has said that in the lands beyond the border, ordinations may be performed by five monks if at least one of them is a master of the monastic discipline. Regarding this rule, where is the border? Where is beyond the border?”

“To the east, Upāli, there is a city called Puṇḍavardhana. East of that is a mountain called Puṇḍakakṣa. Past that is beyond the border

puṇḍravardhana. Puṇḍavardhana is presumably a variant for Puṇḍravardhana, the capital of the Puṇḍra homeland, which roughly corresponds with modern-day north Bengal. Puṇḍravardhana seems to correspond with the ruins of Mahāsthān (or Mahāsthāngarh), which lies seven miles north of the town of Bogra

( śarāvatī . The precise locations of the city and river by this name are still unknown.)

To the west, there are two brahman villages called Sthūṇa (Pillar) and Upasthūṇaka (Lesser Pillar). That is the border. Past that is beyond the border.

To the north is the mountain called Uśīragiri (Mountain Covered with Uśīra Grass). That is the border. Past that is beyond the border.”

According to Law (1976: 132, s.v. uśīradhvaja ), “Usīnārā mentioned in Pāli Literature and Uśīnaragiri mentioned in the Kathāsaritsāgara are doubtless identical with the Uśīragiri of the Divyāvadāna and Uśīradhvaja of the Vinaya Texts .” Law identifies it with the Siwalik range. 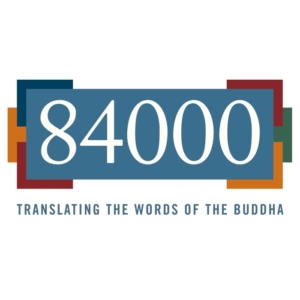 Entry into the Gloomy Forest tells the story of the eminent brahmin Pradarśa, who is converted to Buddhism upon receiving teachings from the Buddha and goes on to establish a Buddhist community in the Gloomy Forest. The text describes the exceptional...

Entry into the Gloomy Forest is an account of the extraordinary life of the brahmin Pradarśa, his conversion to Buddhism, and his founding of a monastic community in the Gloomy Forest, a place, located in present-day Punjab, which we can identify as the Tamasāvana Monastery.
The Degé colophon, by contrast, offers more information about the sūtra’s contents and origin. The colophon can be translated, somewhat tentatively, as follows: “From the ten-thousand-lined Sūtra of the Garland of the Northern Range, this is a description of Mount Uśīra, which is the northern border mountain of the Jālandhara region.
Taking the available evidence into account, we can confidently identify the Gloomy Forest as the Tamasāvana.4 The Tamasāvana finds mention in the Chapter on Medicines (Bhaiṣajyavastu)5 of the Mūla­sarvāstivāda Vinaya, in which the Buddha, accompanied by Vajrapāṇi, flies through the sky to visit the northwest region. He first arrives at Mount Uśīra, which he predicts will become the Tamasāvana, a great center for the Buddhist Dharma, some one hundred years after his passing into nirvāṇa.

You can see Usiragiri on the map above.

So according to traditional Buddhist interpretation ( circa 200 BCE), the outlying region is outside the area listed above. To this day, the ordination procedure only require 5 monks in every country.

I hope the picture is clear enough.
Asmaparantaka is on south west, the region of Aparanta and Asmaka

Nice map, BTW! I’ve been looking for something similar for early Buddhism.