Parallels to the Cūḷavedalla Sutta (MN44)

Some time ago I was sent this article by Bhikkhu Anālayo and I decided to use it to test our Buddhanexus network and see how this could work in conjunction with SuttaCentral.

The sutta features a discussion on various intricate and deep aspects of the teachings between the bhikkhunī Dhammadinnā and the lay follower Visākha.

First I had a look at the parallels as mentioned on SuttaCentral: 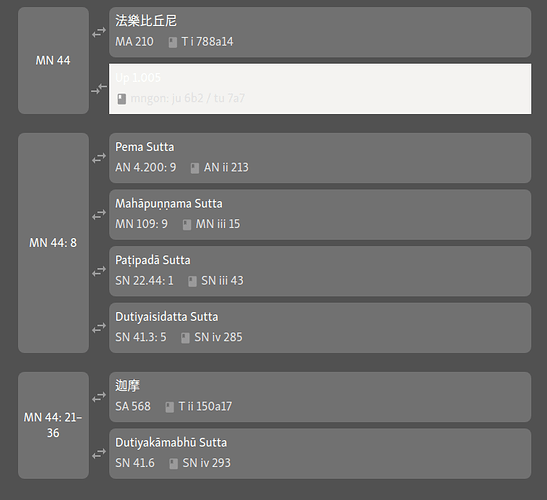 Unfortunately, Bhikkhu Anālayo limited his essay to naming the numbers of the paragraphs of the Pali versions and did not include taisho linehead numbers for the Chinese or folio numbers for the Tibetan, nor the original texts. This makes comparison for me very difficult to come up with an adequate table for the parallels.

Looking a bit further however, I can see that both the Tibetan and Chinese versions of these texts have a number of parallels in other early Buddhist texts using the Buddhanexus framework. I however lack the language skills to make use of this. Until Buddhanexus can compare the various languages, I will have to rely on those who speak these languages to tell me which paragraph is what exactly.

I will therefore limit my research here to the Pali text itself to see how MN44 compares to other suttas using BuddhaNexus and also give a litte sneak-peak into the framework (don’t try to find this online yet - I’m running it locally).

There are 4 different modes of analyzing the sutta. Let’s first look at the general overview in the Graph mode (because it gives pretty pictures

). So first I look up MN44 in the menu or dropdown and choose Graph. 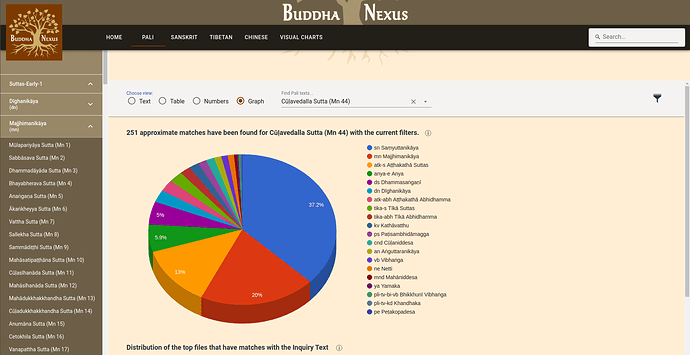 This tells me that with the current filters, there are 251 matches found and their distribution in the pie-chart. However, this also lists the commentaries and other filters have been applied so let’s get rid of the commentarial entries and adjust filters.

Now there are only 94 matches found, most of them in the Samyutta Nikaya. I have also adjusted the length filter to just show matches that are at least 100 characters long (ext. spaces).

Going down to the histogram chart I see that the most matches are found with SN 22. The next one to that is SN 41. 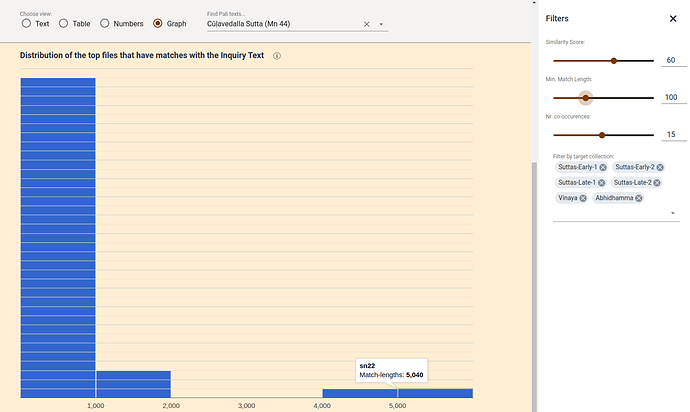 So the Numbers view gives me a big table with numbers. I have cheated a bit in this screenshot because I have asked it to only display the matches with the first 4 nikayas and the Abhidhamma: I’ve already made a choice that those are the only ones I want to see. And I have scrolled down to MN44:7, which corresponds to paragraph 8 as mentioned in the SC parallel table. This paragraph is a very well-known paragraph that says that an uneducated person regards the 5 kandhas as self, in self, or being part of self.

So this table shows me that this particular paragraph has indeed potential parallels with various suttas in SN22 and SN41 but also MN131 and MN132 and with the Dhammasaṅgaṇī. I say “potential” because I will need to have a look at the actual text first to make a decision on whether or not these are actual parallels.

So then I have the option between two other views. Let’s look at Table view first. This gives the results in a table including the matching text portions. 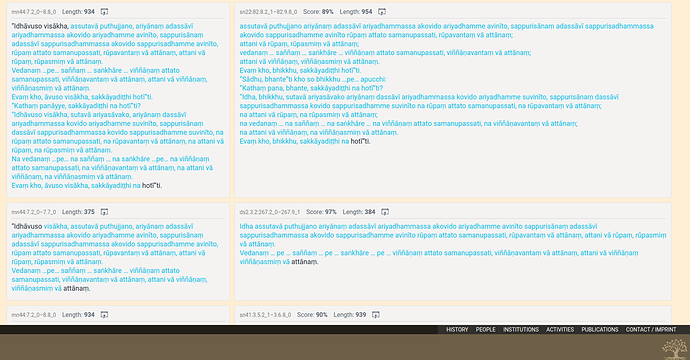 Because of the large amount of information this does not completely fit on my screen so I just made screenshot of an example of what this looks like. It depends on personal preference to determine which way is most helpful to work with.

Finally, I come to the Text view mode which shows me the whole text in lots of lovely rainbow colors. This is a “heat-map”. 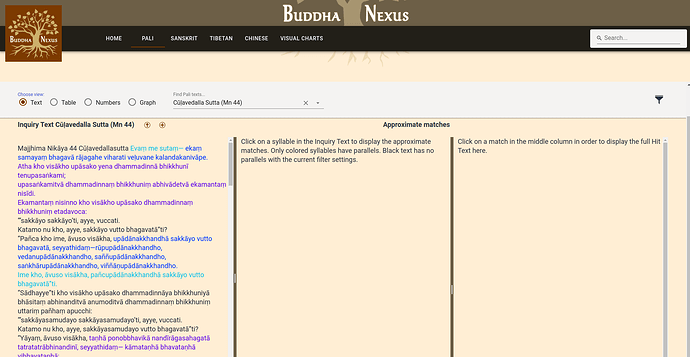 Clicking on the info button that every possible view has, it tells me what is what.

Scrolling down to segment 7 (paragraph 8) and clicking on this portion, the potential parallels are shown in the middle column. I can also move the dividers between the columns to analyze data with more or less space. 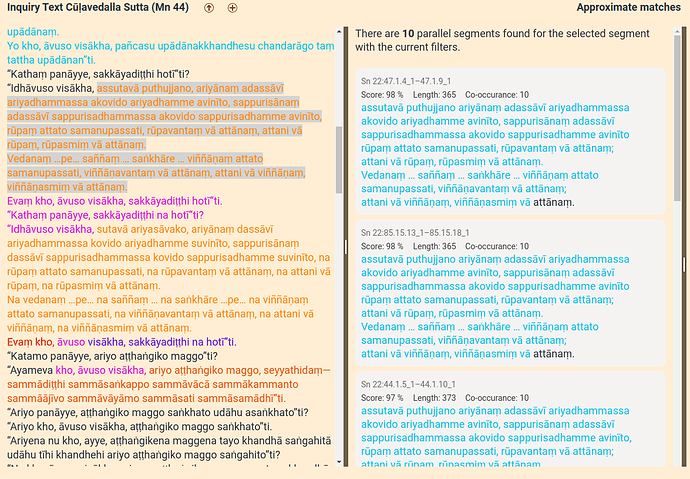 Then when I click on one potential parallel, this text will open up in the right column and scrolls to the right place where this parallel is found. In fact, all the matches between the two texts will be highlighted in green. This way it is possible to compare two texts together. In this case I have chosen SN22.47, which is not mentioned in SuttaCentral’s parallel list but obviously also a parallel. Of course with the Samyutta we have to be careful because it is very repetitive and we can end up listing lots of parallels within the same Samyutta or Vagga.

This way, I can analyse the entire text and come up with a larger number of parallels. For instance, analyzing this it is clear that paragraph 8 also parallels DS 2.3.2 in several places (in abbreviated form). Also, Mn131:8.2–9.8 and Mn132:8.2–9.8 are both parallels to this passage.

In the same way, I can analyze the paragraphs that are missing in MN44 but appear in MN43 and that Bhikkhu Analayo indicates as existing in the Tibetan and Chinese versions. There I can find that MN43, paragraph 25 also appears in Sn 41.6:5.2–5.4.

So this is just a small sneak-peak into the BuddhaNexus framework. Within the Pali early suttas many of the parallels are already listed on SuttaCentral, but for the other languages and later texts this is not yet the case. So using this framework, in combination with the known cross-language parallels on SuttaCentral) a person who understands Chinese or Tibetan (or Sanskrit) can easily find many new parallels in the texts.