This has been suggested before, in 2019, but I think it’s worth bringing up again.

I only just discovered, because someone told me, that there is are indexes to SC. Until now I’ve been going to Access to Insight, using their index, and then consulting suttas here. Unfortunately the search function here isn’t very useful, so an index is very useful.

As Bh. Sujato said last time, the toolbar would be the natural place for this. I’m sure if it was there the indexes would be used much more, with minimal “clutter.” Really just one item needs to be added to the menu, bringing the user to a page listing all the indexes.

Is there anyone else who would like to see this happen?

Thanks for considering this.

Is there anyone else who would like to see this happen?

As Bh. Sujato said last time, the toolbar would be the natural place for this.

Did I? I was tripping. The toolbar is over-cluttered as it is.

I dunno man, “scroll a bit down the Home page to see what is included in the website” does not feel like a super-onerous requirement. I’ll have a think about it, but just remember, “making something more prominent” means “making something else less prominent”.

TBH, I’d be more enthusiastic about promoting it if the indices were done really well, and could be integrated more deeply with SC’s data design. Basically these are just rejig’s of AtI’s work, which is fine for what it is, but it’s just static content. For example, there’s a major limitation where they can’t be properly translated, because they are arranged alphabetically, and that no longer works in the translated language. To fix this properly would require a total rethink and redesign, and to make that worth while, I would want to make a proper redo of the content. So don’t get your hopes up, sorry.

If the index isn’t ready for prime time, I can understand you not wanting to highlight it.

But if we’re referring to the same thing when we’re talking about the toolbar, it doesn’t look particularly crowded to me. There’s just four items: Introduction, Donations, Use Offline, and What’s New.

As for scrolling all the way to the footer: I’ve usually only done this when I’m looking for contact details, and I suspect most people do likewise. I don’t think I’d ever have found the link down there. Anyway, I’m glad there’s an index!

Ooh I missed this, too. I’m prob just used to hamburger navigation being comprehensive. There’s a lot scrolling through the home page you wouldn’t be able to get to otherwise, I think? Wonderful resources!

if we’re referring to the same thing when we’re talking about the toolbar, it doesn’t look particularly crowded to me. There’s just four items

Ahh, ok, well yes that is different. We call that the “tab bar”. I was referring to the main toolbar, which includes text titles and so on.

Still, if it’s on the tab bar, you won’t see any extra items on a mobile, which is the majority of users, unless you scroll the tab bar, which is not common. I honestly don’t think it’ll make much difference in how many people become aware of the Indexes.

Maybe we should think in a different way altogether. Maybe something like a “tips” toast (i.e. the little box that floats up from the bottom like a piece of toast). There are tons of features on SC that people don’t necessarily know about. So we could have a rotating “tip of the day”. A toast is good because it doesn’t obstruct any normal usage, you can just ignore it and it will go away, or you can dismiss it permanently.

Perhaps we could even put such a thing not on the Home page, which is pretty cluttered, and instead on one of the navigation pages. They have a lot more white space.

But still, my main point remains, I’d like to see a properly done and fully integrated set of Indexes before doing anything.

One thought would be to move this part of the home page: 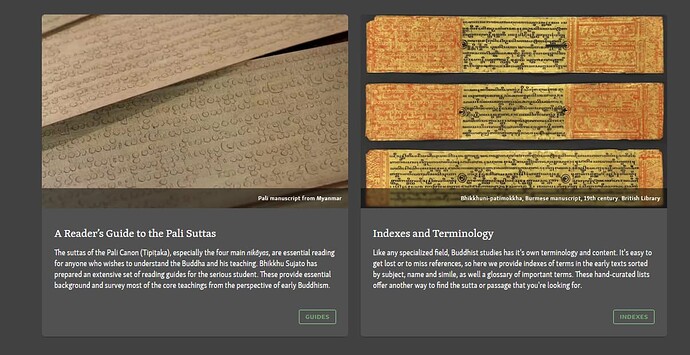 To right below the three baskets cards. Also with much, much smaller images. I’d say these two cards are more important for users than the links to other projects and even the video.

On my laptop this is what I see:

So I’d say the images on these cards should be much smaller. It really discourages people from scrolling down (in my opinion).

I have zero interest in bikeshedding the Home page.

It really discourages people from scrolling down (in my opinion).

We are just trying to tell you about our experience using the site, which is quite different from yours as the developer. Of course it’s up to you what to spend time on. I know you are deeply involved in very important new features, ones that I am very much looking forward to.

What you call bikeshedding, are to me just small, incremental changes that could make the site more usable. But again, they are just suggestions.

And I also understand that the index currently is far from perfect. But with the current state of the search feature, the index is the only way for someone to look up something by topic. Even when search works perfectly, it’s still not a substitute for an even less than perfect index.

Discovery of content is a hard thing to create an interface for. On suttafriends.org, you can see I’ve made it front and center with the “What do you want to learn about today” section as the very first thing at the top of the home page.

I’m now seeing the value of a larger overhaul and not bothering so much with time consuming incremental changes. Adding some ideas here, no pressure at all to use.

The main solution I can imagine is using more nesting in the navigation so that all elements could be comprehensively represented through nav alone, no scrolling through homepage required.

For example, you can compress many of the individual functions in the menu now into collapsible headers (this is just an example, not comprehensive):

This style would allow for the navigation to comprehensive of all available without being visually overwhelming.

ETA: I wonder if there is a UI designer among the community who would volunteer their time to this project to make nav easier? Or someone Bhante already knows?

Thank you. Your openness to rethinking the usability of the site is reassuring.

I’ll just chip in a little from a user’s perspective. Also, however, I own a few websites, so I do think about site layout and usability a little, although I’m not an expert.

As a very general point, the images take up a lot of space. They’re nice, but they get in the way of navigating the site. I’d suggest they be smaller or be dispensed with.

I’ve been to the site hundreds of times, but I’ve rarely looked at the home page (on a pc) below the Three Basket section, which is the prime real estate on the site. My use starts with the Three Baskets, takes me to individual suttas, and then I leave.

Why is this? There are attentional barriers to scrolling further.

The existence of the video and the accompanying "The wisdom of the Buddha…” text is a bit of a deterrent to scrolling. As a repeat visitor, the video and description have no value to me (would anyone play the video twice?), but they occupy the second most important spot on the home page — the first thing I encounter when I scroll on a computer — and since they’re low-value content I automatically assumed that anything below that would be of even less interest.

That impression is reinforced by the quote and sutta link section below that. It’s nice to have a quote, but the chances of me clicking to view a random sutta are close to zero. When I come to the site it’s inevitably with a specific purpose. For me, and for many others, I expect, it’s a research tool. So I’ve now hit two non-useful areas and am mightily deterred.

Those are two big barriers to a researcher going further down the page, but there’s more…

The What’s Here and Where to Begin sections take up a lot of real estate. By now we’re gone a long way down the page and we’re back to introductory material. If I was scrolling down this far I’d certainly be bouncing back up to the Three Baskets sections, since I know that’s useful to me, while nothing else I’ve encountered below it has been.

Then there’s Related Projects, which would definitely make me think I’m at the end of the page, because you’re trying to send me elsewhere.

Why We Read is something else I’m never going to use.

The Reader’s Guide looks like a good resource for people new to the site, or at least to the scriptures. Although it’s not for me, I think it should be higher up the page — maybe where the video and description are (honestly, I don’t think those would be missed at all).

And the Indexes — well, although I’ve been told there are problems with them, I really wish I’d know they existed! What a useful resource! Until now I’ve been using the index at Access to locate suttas and then switching over to SC to read them — the big appeal being the ability to view that Pali and English together and look up Pali words on the page, and the availability of multiple translations. This definitely needs to be more prominent.

I honestly think a lot of what’s on the front page could go and wouldn’t be missed.

If I was going to ask for the site to be set up for me as an amateur researcher, I’d probably have the following sections in the following order (as seen on a PC):

The Reader’s Guide would help take care of relative newcomers, I think.

Anyway, those are just my thoughts. This isn’t meant to sound critical. Everything I’m saying is an expression of love! Sutta Central is my go-to site. I’m here virtually on a daily basis and want others to get the most out of it.