Saṃyuktāgama 293 -- the connection with emptiness

I was attracted by the words “Connected with emptiness” which appear in the title of the English translation of 雜阿含經 (293), which is the Chinese rendering of the saṃyuktāgama – for which, sadly, as far as I know, the Sanskrit is longer extant.

I wanted to research exactly how the Buddha described the Dharma as “connected with emptiness.”

The Sutra as translated (https://suttacentral.net/en/sa293) contains the sentence:
“I teach monks the noble, the supramundane, connected with emptiness, conformable to the dharma of conditioned genesis.”

More literally 相 means form, aspect, appearance, manifestation. So 空相 describes the Dharma not so much as “connected with emptiness” as “having the form/aspect of emptiness,” or “being the manifestation of emptiness.”

In the translation of the Heart Sutra from Chinese back into Sanskrit, 空相 is rendered as śūnyatā-lakṣaṇa. Hence:

So in the Saṃyuktāgama did the Buddha describe the Dharma as
賢聖, noble,
出世, supramundane, out of this world, world-transcending,
空相, being the manifestation of emptiness,
應緣起隨順, being conformable to dependent arising ?

If so, I would be grateful if anybody could point me to any possible parallel in the Pali suttas where the Buddha describes the Dharma as something like 空相, “being the manifestation of emptiness.”

Please have a look at

I’ll have a look through Analayo’s Compassion & Emptiness later tonight for that sort of phrase.

Thank you for the response.

My interest was sparked by those two suttas already and in recent weeks I have had a go at translating them, in full and in part, mainly for my own benefit.

The Emptiness of an Unencumbered Mind: Mahāsuññatasuttam

The teaching recorded in the Pali Suttas as Mahāsuññatasuttam , The Greater Discourse on Emptiness (MN122), was evidently stimulated by t...

So far I haven’t felt able to afford one of Richard Gombrich’s books. There’s so much in the Pali Suttas themselves that I would study first, if I hadn’t become such a lazy good-for-nothing in my old age. Not only lazy, to be honest, but skeptical of anybody’s view. So if it is said anywhere in the Pali Suttas that the Dharma is connected with emptiness, or that the Dharma is a/the manifestation of emptiness, I would like to have it straight from the horse’s mouth. But thank you anyway for the pointer.

Thank you very much. I wasn’t aware of the existence of Analayo’s Compassion & Emptiness.

although the subject of the sutta is not emptiness, there’s this phrase in the Parisa sutta (AN 2.46)

There is the case where in any assembly when the discourses of the Tathagata—deep, deep in their meaning, transcendent, connected with emptiness—are recited

On that note, at the beginning of the discussion of emptiness Analayo comments that, in fact, the word most often used is “empty”, e.g. ‘X is empty of Y’, & not “emptiness”. This usefully discourages hypostatization, focusing attention on the quality of being empty, rather than emptiness-thing in the abstract.

I’m not very familiar with that phrasing: “manifestation of emptiness”… it seems off, somehow.

There is the case where in any assembly when the discourses of the Tathagata—deep, deep in their meaning, transcendent, connected with emptiness—are recited

Many thanks indeed. This is exactly what I was looking for. So suñña­tā­paṭi­saṃ­yutta, which in Sanskrit would be śūnyatā-pratisaṁyukta, “bound/connected to emptiness.”

Thanks again for finding that. Much appreciated.

“manifestation of emptiness”… it seems off, somehow.

Yes, emptiness means empty of something. In the first instance, it refers to the five skandhas being empty of self. But also the condition of being empty of greed, hatred, delusion. Or action which is empty of reliance on thinking and feeling. Zen practice centred on “just sitting,” is described as “non-doing,” – i.e. empty of doings born of ignorance.

This calls into question the 空相 in the Heart Sutra, and its back-translation into śūnyatā-lakṣaṇā – a case of “Send reinforcements we are going to advance” turning into “Send three and fourpence we are going to a dance.”

@Mike
You might find Anālayo’s translations of the Chinese Madhyama-Āgama parallels to MN 121 and MN 122 interesting if you have not seen them. They are in his book Compassion and Emptiness in Early Buddhist Meditation. The first one ends with:
Ānanda, you should train yourself like this: ‘I shall also truly dwell in this emptiness, without distortion namely in the eradication of the influxes, the influx-free and unconditioned liberation of the mind.’

And whoever translated 空相 as “connected with emptiness,” must have been informed by knowing the Pali suñña­tā­paṭi­saṃ­yutta or Sanskrit_ śūnyatā-pratisaṁyukta

i think this is the man 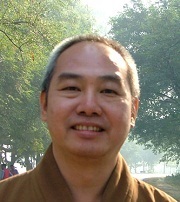 Ah yes, thanks for that. That all adds up now. Hence the translation of 緣起 “conditioned genesis” (instead of the more standard dependent arising or conditional origination), which I remember now having noticed in Dr Mun-Keat Choong’s book, when I browsed it on Google books.

What a great site this, by the way, for allowing things to add up.

Thanks for the pointer, Linda… but …

Comparing the Sanskrit of Aśvaghoṣa’s Buddhacarita with the Chinese translation of it, has sort of prejudiced me against Chinese translations in general. I think a lot of confusion has been caused by the vagaries of Chinese as compared with the accuracy of Sanskrit. The outstanding example, for me, is the translation of saṁskārāḥ, the 2nd in the 12-fold links in the dependent arising of suffering, as 行.

行 means to act, to go along (the pictograph is of tracks). If saṁskārāḥ in the context of the 12 links means something like those “habitual doings” which are born of ignorance, then 行 sort of conveys some connotation of habitual doing. But it fails accurately to convey any of the negative connotation of saṁskāra as what is put together, contrived, constructed, fabricated, manufactured etc.

空相 (Jap: KUSO) is another case in point. Only because of his knowledge of the original Pali or Sanskrit original was Dr Mun-Keat Choong able to restore the original excellent meaning “connected with emptiness.” The Chinese character 相 means form: it does not convey any sense of “connected with.” Therefore when I used to recite the Heart Sutra in Japan, reciting ZE-SHOHO-KUSO, I understood 空相 to means something like “an empty form,” – i.e. a form that is bare, as it is, like the moon in the clear sky. In retrospect I think I was somehow deluding myself with a romantic thought. The fact might be that 空相 represents suñña­tā­paṭi­saṃ­yutta / śūnyatā-pratisaṁyukta and the phrase describes the Buddha’s teaching as being connected (from beginning to end, from the first turning of the Dharma wheel, through Nāgārjuna, through Dogen etc.) with emptiness.

Hi @Mike,
Thanks for your interesting reply. Unfortunatley I don’t know Chinese or Sanskrit so can’t really comment!

In addition to reading/studying the Pali suttas, I do follow Anālayo’s ‘early Buddhism’ comparative studies and text critical work because I respect and trust his research and find it really helpful how he compares parallel versions of the early discourses (not only the Chinese Āgamas but also ones available in Sanskrtit, Tibetan & misc others).

Thanks for the pointer, Linda. I notice that Bhikkhu Anālayo and Roderick S. Bucknell have worked together on a translation of The Madhyama Āgama, and I know that Rod Bucknell’s input is gratefully acknowledged in many places at Ānandajoti Bhikkhu’s website, http://www.ancient-buddhist-texts.net/, to which I refer almost on a daily basis. I also notice that Dr Mun-Keat Choong acknowledges Rod Bucknell as his teacher. My brain tends to be better suited to nit-picking than to seeing the big picture. Where the hell I might fit into that big picture, I have little or no idea. But I do see the evidence that the Buddha’s teachings have from the beginning been not only connected with emptiness but inextricably linked with emptiness – and as a translation of paṭi­saṃ­yutta, “inextricably linked” might be even closer to the mark than “connected.”

and as a translation of paṭi­saṃ­yutta, “inextricably linked”

although certainly the conception of emptiness developed and changed somewhat (or at least was framed and/or understood somewhat differently) over time in different schools and as Buddhism developed. I wonder how much this has affected translations over time.

I notice that Bhikkhu Anālayo and Roderick S. Bucknell have worked together on a translation of The Madhyama Āgama,

The first volume is out and I believe there are two more to come. I’ve heard Anālayo talk about trying to understand what the underlying Sanskrit original is when dealing with these translations. In his papers comparing various MĀ & Pali parallel suttas, he often has footnotes discussing the Chinese characters and alternate readings (though it’s all ‘just Chinese’ to me). The Chinese Āgamas were translated by different people/groups (maybe you know this), apparently some better, some more problematic, and I’ve heard Anālayo say that he thinks for the most part, the MĀ collection was quite well done (the Chinese I mean).

Anyway, his work is definitly worth looking at, and much of it is available on the web. What I really like about it is that’s it’s based on a very solid methodology (which he is very clear about) and he goes directly to the various sources of course. I’m with you about wanting things as much as possible ‘from the horse’s mouth’ so to speak, and would generally much rather spend my time reading the suttas than reading most other scholar’s views & opinions (so Anālayo is an exception!)

i did a search by English, SN 55.53 doesn’t have English translation on SC, so search by Pali is likely to yield more results

For anyone wanting the English of this phrase, Bhikkhu Bodhi translates it as "Therefore, Dhammadinna, you should train yourselves thus: ‘From time to time we will enter and dwell upon those discourses spoken by the Tathāgata that are deep, deep in meaning, supramundane, dealing with emptiness’

The character 相 has a very general meaning and nothing in a translation should hinge entirely on an overly-particular interpretation of this one character. Typically 相 would not be translated as “form” or “connection,” though. Form would be 色 or 形.