On the 25th of March 2018 at the AGM of the BUB (Buddhist Union of Belgium) held at Nalanda Institute in Brussels Samita ASBL’s recognition as a full associated member of this Belgian Buddhist umbrella organisation has been on the agenda. Danny Buysse and Anagarika Sabbamitta represented Samita at the meeting.

(Samita ASBL is the supporting organisation for Tilorien Monastery) 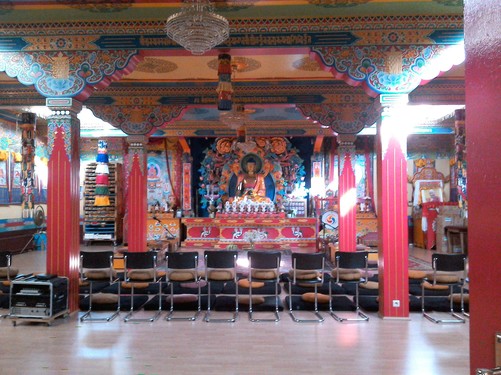 The meeting was hosted at a beautiful Tibetan temple and was held in two languages (French and Dutch) with the assistance of a simultaneous interpreter who did a fantastic job.

Samita had been a temporary member of the BUB without voting right for more than a year, and now the present member organisations voted for us to become a full member. This was a great moment for Samita ASBL!

Our membership in the BUB will help us to become better known in Belgium. First, the representatives of the other Buddhist organisations who come to the meetings know us in person, and we know about the activities of these groups. There are common interests with some of the groups, and it might be possible to share forces or resources on particular occasions. And also our events can more easily be spread around among Buddhists and other interested people in Belgium. By complying with the BUB’s organisational and ethical standards our organisation will have a more solid basis for official recognition. And in case the official recognition of Buddhism as a religion by the Belgian state will eventually become a reality this will also have advantages for Samita, even in the form of a financial support.

After Samita’s acceptance as a full member there was still another agenda point to be voted upon. This was then the first opportunity for Samita to participate in the voting process, and we were very proud to vote in favour of the BUB signing a statement called ‘Conversion therapy has no place in the modern spiritual world’.

Conversion therapy has no place in the modern medical and spiritual world.

Part B: September 2017 additions ‘Conversion therapy has no place in the modern spiritual world’

I’m happy as can be now, and i see some interesting “Wat too Wat- walkabouts” through Europe as a optional Holiday possibility in the future

that is if my feet don’t fail me …

Congratulations! I’m a little surprised that Buddhism isn’t an officially recognized religion in Belgium. What all does that entail?