Aminah, I realize belatedly that we hadn’t completed our discussion of the new icon design for the sutta view (vs. the search results view). Because of the deadline, I’m implementing a compact version of your sketch: 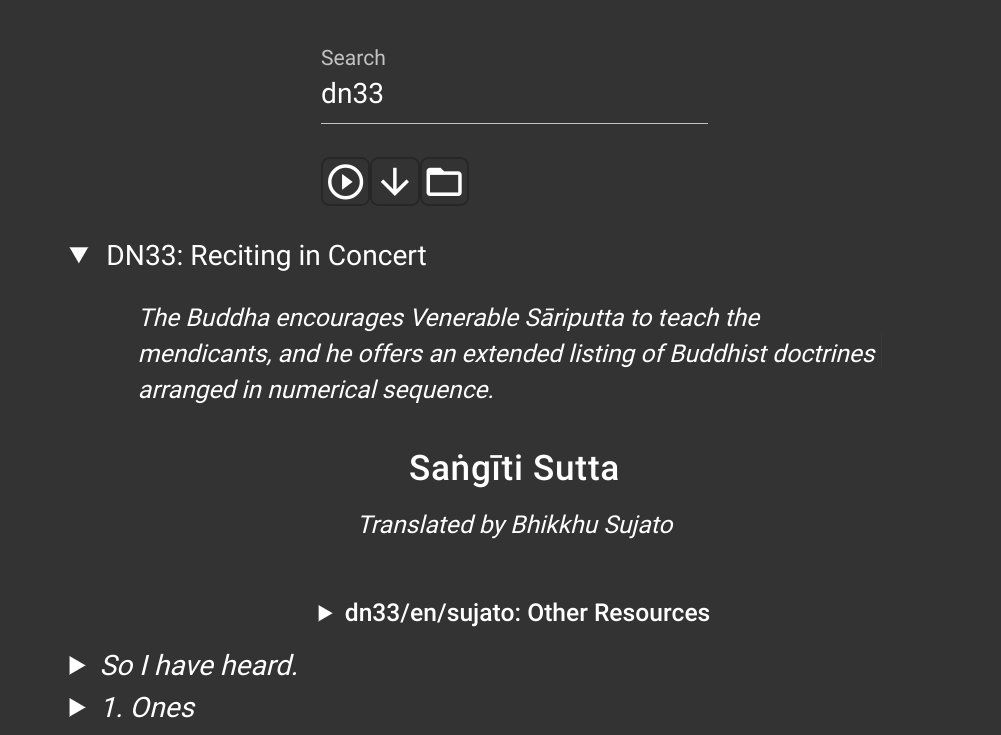 @Blake, I will be updating content from SuttaCentral starting now. This will provide a steady barrage of requests. If this is a problem let me know and I shall stop the batch job.
This will take a few minutes…

Update completed. No changes. I will repeat this on Friday as part of SCV release of v1.0.

Just to double check, you now have everything you need for release?

you now have everything you need for release

Possibly not. There might be another content update in the next 16 hours (Bhante just made some corrections). I’ll re-run the content update tomorrow morning. Until then I’m in “code freeze” just testing.

Blake just updated the git source, I am checking it now, unless there is some problem this will be the final update.

Running final content update for v1.0. This will impact SC servers for about 20-30m…

Running final content update for v1.0. This will impact SC servers for about 20-30m…

Hmm. No changes. I think we’ll have to revisit this in v1.1.
I still see the MN79 typo (Middles Discourses). My script pulls from the live SC site, not Github, so I’ll need to take a look at that code.

Release v1.0 features Aminah’s redesign of the SuttaCentral Voice user interface. You will notice a cleaner, slimmer design that relies on icons. It’s so HARD to make things simple! Thank you, Aminah!

NOTE: If your downloads are long (e.g., DN33), you will experience timeouts. Simply retry. The timeouts will require a lot more work to resolve. Basically the solution will be to have pre-computed sound samples for everything and that’s a tall order. Right now we TTS on demand.

Also of interest is that preferences can now be stored in cookies. The new UI avoids those pesky cookie pop-ups, so you’ll have to set your cookie preference manually.

There’s a lot of new code in the new release. Please let us know of bugs, features, confusions, etc.

By the way. Does anybody see the first bug of v1.0?

I was testing with my eyes closed so it should be pretty obvious.

Who will be the winner of this contest? Who will see the bug?

Do you mean the nodejs load screen?

For me personally I think of it as a feature as just this week if figured out npm, so I’m assuming the load screen is just there to congratulate my unlikely accomplishment.

Do you mean the nodejs load screen?

Nooooooooo. Not that (although if that’s a bug that should be fixed, just add it to the plan). It’s…something else that will make you laugh.

I actually just fixed the bug. It was a comment to myself…

Okay, well I like laughing so whatever it is leave it!

Will continue having a poke…

I think you might have taken the ARIA labeling thing a bit too far:

I think you might have taken the ARIA labeling thing a bit too far:

BTW, normally we would overlap SCV staging and release so that you could preview and provide feedback on features. However AWS charges us for that feature, so I’ve been relying on screenshots to keep you up-to-date. This means that your feedback will happen post-release. However, what is released is simply a guess that requires review and changes for v1.1.

Karl, once more, endless thanks. Of course, I’ve yet to get really into it, but through just a five min play around I’m overjoyed with some really brilliant improvements.

I am equally impressed. The two of you did a fantastic job, congratulations!!!

@sabbamitta, we shall be very curious to hear your feedback on downloadable playlists. I think you might already be using downloads and the feature has been completely rewritten. Of particular interest is how you might use it to download multiple suttas if that is of interest to you.

Endeavouring to keep an orderly ship, I will call time on this thread as with Karl’s announcement we have come to the end of the road.

Please give any feedback you have here:

Dear friends, I have the incredible privilege of announcing that @karl_lew has just released v1.0.0 of SuttaCentral Voice (SCV). His is an extraordinary accomplishment, and I further have the incredible privilege of being the first in line to offer him my heart felt thanks for smoothing the way for myself and, no doubt, many, many others to hearing the teaching of the Buddha. You can checkout SCV here. There are yet more plans to develop this wonderful app, and if you have any feedback (bugs,…