Thx @bheckel Bob, This sutta needs to be accessed from the following link :

Thanks, I can access them directly! It may be naive but can I volunteer to edit the page with the broken links (SuttaCentral) in github or is there more to it?

A post was merged into an existing topic: Make us happy: tell us about our mistakes, errors, and typos

Hi Bob, welcome to the forum!

It may be naive but can I volunteer to edit the page with the broken links (SuttaCentral) in github or is there more to it?

Dhammapada links are a bit special, because canonical links only exist for each vagga in the collection, not for each verse.

If you follow the link to Dhammapada you will see that all verses from 1–20 are collected under the same link, which points to the Yamakavagga, verses 21–32 point to Appamādavagga and so on.

This is a design choice (single verse on a page would break the text flow more and would thus be less friendly for reading than one vagga per page).

@HongDa perhaps there might be some magic which would redirect manually entered links like /dhp7 to the correct canonical link /dhp1-20?

@HongDa perhaps there might be some magic which would redirect manually entered links like /dhp7 to the correct canonical link /dhp1-20?

Voice has such a magic, and so do EBT-Sites like Dhammaregen. You enter any number of a so called “vagga sutta” into the search field, and you get the correct vagga. I remember a discussion that SuttaCentral would also want to make something similar, but I don’t know when … It’s probably a question of priority, as there are many issues to solve and few people to do it.

I have also discovered the magic 🧙🏻‍♂️ and added it into a citation lookup app I just shared. https://sutta.readingfaithfully.org/

If you enter dhp184 it will give you the link https://suttacentral.net/dhp179-196/en/sujato#dhp184:1 (as well as direct links to translations on other sites.

However I don’t know if this id system is officially supported, meaning that it will be around for the long term. If the links did get updated on the index pages mentioned, at least they would fail gracefully if the ids stopped working.

When I try to click on member/user names or profile picture to see their profile, some work and some don’t. Some just very briefly twitch the screen. This has been going on for a week or two.

I’m using Safari 15.2 and I also tried Chrome and Firefox.

That’s really a @helpdesk-dd issue. The thread is really for problems on the main site, I believe.

https://suttacentral.net/mn9/en/bodhi#sc17 style refs aren’t working, I think because I can’t force “main” refs to turn on via ?reference=main like I can on segmented texts and when the refs are off, the #sc17 in the url has no tag to scroll down to

https://suttacentral.net/mn9/en/bodhi#sc17 style refs aren’t working, I think because I can’t force “main” refs to turn on via ?reference=main like I can on segmented texts and when the refs are off, the #sc17 in the url has no tag to scroll down to

Could I ask you to open an issue on SC for this? I’m snowed under today!

Hi! I found that the padding on mobile is missing in this Sutta * Middle Discourses 125Majjhima Nikāya 125

The Level of the TamedDantabhūmisutta

Hmm, this is caused by over-long Pali words. Browsers are dumb, they don’t know Pali and can’t add hyphens! We built our own hyphenator to fix this, but it appears to be not working. Thanks for the heads up!

Meanwhile, add a thumbs-up on this issue and let’s get the browser makers to add better hyphenation support.

The CSS spec provides for hyphenation of text, leaving the choice of language up… to the UA: https://www.w3.org/TR/css-text-4/#hyphenation Currently Firefox offers the best support, but even they only support fairly small subset of the world's languages. https://developer.mozilla.org/en-US/docs/Web/CSS/hyphens The thing is, it is sometimes better to have imperfect hyphenation than none at all. No hyphenation can result in a broken UI and unreadable text, whereas imperfect hyphenation might work fine, or at worst be merely inelegant. I work with texts in Pali and Sanskrit, which can have very long words formed by compounding. There is no browser support for hyphenation for these, nor is there likely to be. Surely these are not the only languages affected. Here is a typical example, rendered in firefox: ![Screenshot from 2020-06-30 09-26-16](https://user-images.githubusercontent.com/6112010/86071515-ccc36280-bac2-11ea-8338-b6cee8657cdf.png) It is possible to hack around this by activating hyphens and setting `lang='la'`: ![Screenshot from 2020-06-30 09-25-58](https://user-images.githubusercontent.com/6112010/86071483-b6b5a200-bac2-11ea-906e-5b711bc018b8.png) This is identical to the result that a proper Pali hyphenation would produce. Note that in tradition Indic orthography, there is no concept of a correct breakpoint; scribes merely wrote to the end of the line and continued on the next line. Thus the traditional practice would agree with the idea that sometimes *any* breakpoint is better than none. However, it's obviously not a good idea to deliberately set a false language. Hence my proposal: **Allow the CSS to declare a language alias for hyphenation**. So the text language is unaffected, and the HTML does not change. But the user can declare via CSS something like: ``` hyphenate-alias-languages: pli, la; ``` Meaning: "for the purpose of hyphenation, Latin and Pali may be substituted." Such substitution would apply only if explicit support for that language is missing. So if `lang='pli'` is set on the HTML, then if one UA has support for Pali hyphens, that is used, if not, it looks for support for Latin.

I’m just curious if that really impacts decisions made on these kind of things.

And for anyone curious about doing this, you will just need to create a github account. Then look for this button at the bottom of the original post:

I’ve been noticing this bug for a on Android Oreo (Chrome 96.0.4664 ATM, but has persisted on all versions for a good while) 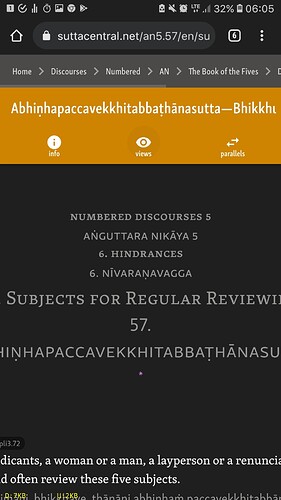 It seems that whenever there is a very long Pali title that doesn’t fit it ends up expanding the margins of the text beyond the screen limits. The only way to make it readable is to flip the phone horizontally.

I have noticed on a few occasions when finding suttas sorted by subject (SuttaCentral), that some suttas are not what is mentioned in the preceding text.
On this occasion I took note and thought of sharing here (I hope it is the right place) and hope it helps all 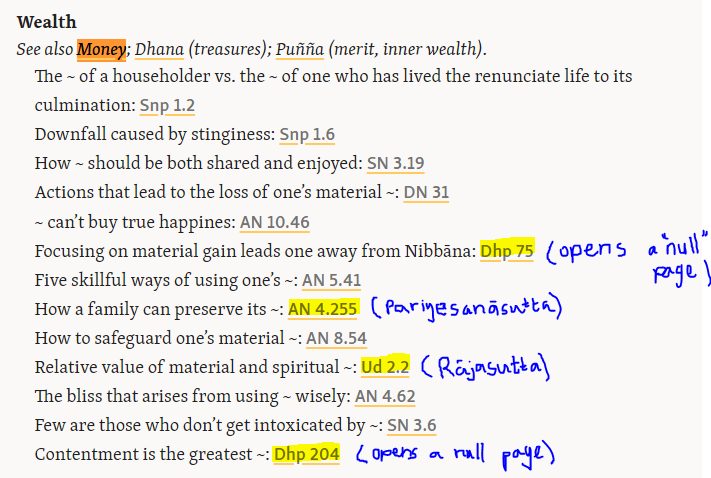 I hope I am not wrong and have wasted valuable time. Many merits to everyone helping to make the Buddhas teachings easily available to all!

Welcome @Kavishka! You’re not wasting anyone’s time at all!

Unfortunately there are problems with the index page. Especially the Dhammapada links. I think a change is being made on the site to improve Dhp linking, so hopefully when that’s done these links can be fixed.

If I’m not mistaken, this index was mostly just copied from accesstoinsight.org. You may just want to use the index there.

It seems that whenever there is a very long Pali title

Yes, see the previous comment, it is on our to-do!

As Snowbird mentions, this is underway.

The sutta for “how a family can preserve its wealth” has the link to AN 4.255 - Searches (Noble and ignoble searches).

This is a mistake, it should be AN 4.258. The problem stems from the fact that this was adopted from Access to Insight, and the numbering they use there is occasionally different. It shouldn’t be too difficult to find and correct these entries, but someone has to find the time!

For “relative value of material and spiritual wealth” has a link to Ud 2.2

This one is correct, it is the reference given in the original list. Perhaps not the most useful link for the topic, but it is relevant.

Thanks for pointing these out, and sorry to send you astray! We’ll try to get the errors fixed.

Please note, the overlong Pali word problem should be fixed in the latest update, refresh the page and it should work.