Suttaplex lists include everything that was formerly found in Tabular pages, including division, subdivision, and details. I.e. everything apart from the texts, home, search, and static pages.

Our suttaplex list is not identical with any of the stock MD components. It is similar to a “list”, in the the items are arranged in a fixed vertical order. But they have richer content than a list, and in that respect are similar to a “card”. 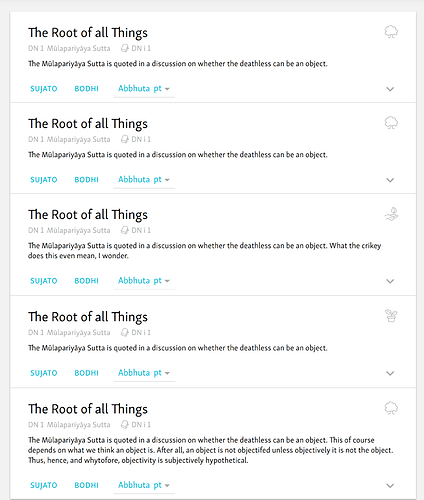 We don’t need to go to a new page to display details. Rather, the data is collapsed by default, to allow scanning of the suttaplex list, and the parallels for a specific suttaplex are opened via the expander.

There are several ways of doing this in MD.

The slickest way is to use what MD calls “parent to child” transition:

The surface that the user touches should lift up and expand into place from its origin. This expansion and motion highlights movement away from the parent towards a destination (a child element) in a natural movement using the material motion curve.

This would be the same as opening an email in Inbox.

Here is a Polymer element for this:

However, this approach only works in one-column designs, where there is a margin for the child element to expand into. If this is not appropriate, we can use a simpler expandable element, which is called an “expansion panel”:

Here are some Polymer examples:

Here is a mockup, showing the parent-to-child transition. The expansion panel would look similar, except the transformations are less drastic: it doesn’t move “towards” you, so there is no increase in size or shadow depth. Also it remains connected with the previous and subsequent items. 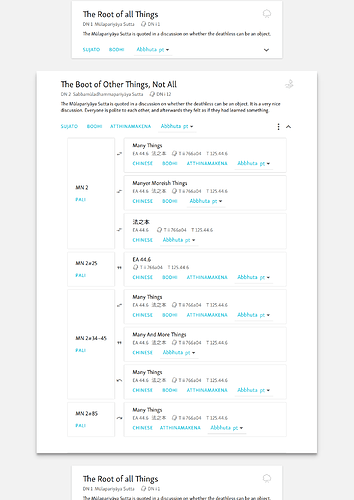 We use MD icons to indicate various relations between the parallels. So far as possible, these should indicate the kind of relation visually, as well as being harmonious with the intended meaning of these icons

Both mentions and retellings are reversable, as they indicate a directional relationship. To avoid overburdening the icons with meaning, keep the icons simple and further define the relation as necessary in the title attribute, to display on hover. Note that in a retelling it is sometimes possible to indicate a direction (“this event is retold in …”) but often this is not the case, so we use a bidirectional icon.

Okay, because we all love jargon so much, let’s introduce a new term. Yay! As with previous new ideas, I will develop it here, so expect this to change. A node is any item that is represented in the nav drawer as a link. So the nodes are levels of the hierarchy, but specifically, those levels that represent actual features of the texts, as opposed to mere navigational convenience. My thinking on this is evolving from a number of related questions. How to handle division length texts? Shou…

I’ve upload everything to Github so you can pull it from there: https://github.com/SamaneriVimala/polymer-mockup-sc. This is no longer working online.

The SuttaPlex has been implemented as follows:

sutta-plex.html creates a paper-card that displays the data per sutta as well as a collapse item for it’s parallels. It pulls in:

If you have any questions, please let me know. You should be able to run it locally.

I managed to get it working! It took, oh, about 5 seconds. Maybe 10. Anyway, so I’ll poke around and play with it a bit, and when you’re back next week I’ll probably have some questions for you.

How did you do it? Did you git clone it? I cannot see you as a collaborator and I have had no request to add your ssh key so I suppose you are running an independent clone and cannot push to the repository.