Okay, because we all love jargon so much, let’s introduce a new term. Yay! As with previous new ideas, I will develop it here, so expect this to change.

A node is any item that is represented in the nav drawer as a link.

So the nodes are levels of the hierarchy, but specifically, those levels that represent actual features of the texts, as opposed to mere navigational convenience.

My thinking on this is evolving from a number of related questions.

I took inspiration from Inbox by Gmail. There, a day’s emails are grouped together in a list of expandable panels. Each day is separated by a field. This separating field is not on a “card”, but on the background; it is de-emphasized. It is also fairly simple, consisting of just a title and one action icon.

It seems to me we can resolve all these issues by adopting a similar idea.

As compared to suttas, nodes are often semantically thin and less amenable to systematic treatment as data. In many cases, a node merely represents a keyword derived from a word in the first sutta of a vagga. However, in other cases a node is quite rich and deserves a substantive explanation; for example, a nikaya.

Since node descriptions are hidden by default, we can allow a longer and more flexible description than for suttaplexes. The purpose of the information is to acquaint a new user with the basic background information for that node. Typically they might include:

While a user might revisit a Suttaplex list many times, normally we’d expect them to just check a node description once. So it should not be intrusive.

Here is a mockup of a Suttaplex list with closed nodes. 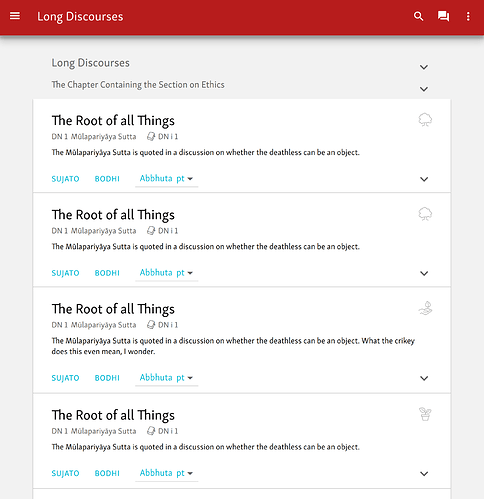 And here is a mockup with the nodes expanded. Each node may be expanded individually, but here they are both expanded. 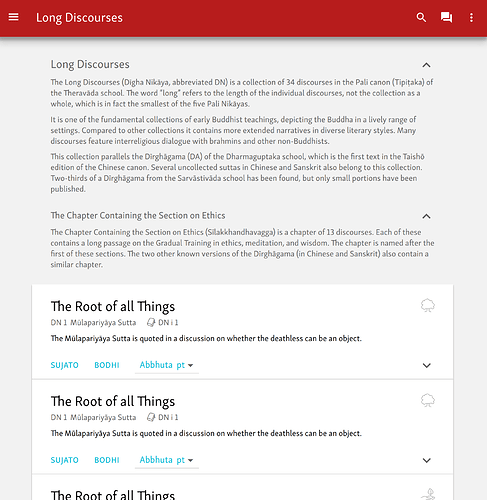 was this mockup meant as a ruse as well, to test advertence to details or is it just lighthearted about them?