The country where Esperanto :babel_fish: was the official language 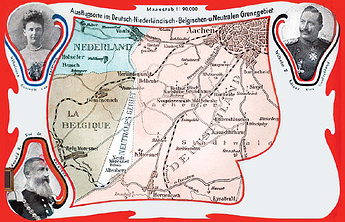 Moresnet_Karte907×584 456 KB
Some time ago, Bhante Sujato told me that we might be getting some sutta translations in Esperanto, a constructed language which literally means “One who hopes”. I was very excited about that because very close to where we will have our Tilorien Monastery is an ancient country called Neutral Moresnet. This was the only country in the world where Esperanto was the official language.

Esperanto was created in the late 1870s and early 1880s by L. L. Zamenhof, a Polish-Jewish ophthalmologist from Białystok, then part of the Russian Empire, but now part of Poland. According to Zamenhof, he created the language to reduce the “time and labour we spend in learning foreign tongues” and to foster harmony between people from different countries: “Were there but an international language, all translations would be made into it alone … and all nations would be united in a common brotherhood.”

Esperanto was going to be the

that would bring peace to the world. Only 2 million people in the world speak Esperanto, but there are websites and even newspapers in the language.

_![moresnet|320x190](upload://2a9HJIKZpXCSKxCtKCQvhMVw6Vg The tiny country of Neutral Moresnet existed for just over 100 years, from 1816 to 1920. It’s area was never more than 3.6 km2 (1.4 sq mi) and it never had more than 3500 residents. In 1908, Dr. Molly proposed making Neutral Moresnet the world’s first Esperanto‑speaking state, named Amikejo (“place of friendship”). The proposed national anthem was an Esperanto march of the same name. A number of residents learned Esperanto and a rally was held in Kelmis in support of the idea of Amikejo on August 13, 1908. The World Congress of Esperanto, meeting in Dresden, even declared Neutral Moresnet the world capital of the Esperanto community.

However, neither Belgium nor Prussia (now within the German Empire) had ever surrendered their original claim to it. Around 1900, Germany in particular was taking a more aggressive stance towards the territory and was accused of sabotage and of obstructing the administrative process in order to force the issue. During WWI the country was annexed and since 1920 it is no longer in existence. Since 2016, there is only one woman left who was born in this country. Frau Meessen is now 103 years old.

Esperanto would certainly make our job for SuttaCentral much easier!!!

Esperanto would certainly make our job for SuttaCentral much easier!!!

Esperanto was to replace all world languages so all people in the world would speak the same language, which would facilitate peace. At least that was the theory but it never worked out.

For us as developers, it would make a huge difference if we only had 1 language to deal with!

I18n for anybody who thought our job is easy! The Watercooler

Just want to share a link that @Blake just sent us. Just in case any of you thought that developing an international site for SuttaCentral is easy.

Esperanto was to replace all world languages so all people in the world would speak the same language,

Why Esperanto?
Why not, say Chinees.?

You can look up the whole history of it on Wikipedia:

But living in a country with 3 official languages and they are always fighting about which language to use, I guess it is much easier for everybody to introduce a language nobody has an attachment to.

I guess it is much easier for everybody to introduce a language nobody has an attachment to.

That would make our life even easier! No need to translate anything at all!
But I guess the muslims and christians might object.

Is this an attempt by Jewish to take the control of the world?

Why not, say Chinees.?

I think the reason lies mainly in avoiding to enhance any country’s position of power. When choosing Chinese, or, say, English which is already quite an international language, as the world language this gives more power to countries where this language is native. Esperanto is just an artificial language and native to nobody which makes it neutral in this respect so it is more in a position to promote world peace. Also, it is supposed to be easy to learn.

I knew a man (a friend of my parents, now passed away) who was very much into Esperanto. From him I know that the world Esperanto community are not only communicating in the same language, but also offer open hospitality among their members. This person would for example have guests from Japan and all kinds of other countries stay in his house, and when he went travelling he would stay with his Esperanto friends all over the world (a bit like “couch surfers”).

Apart from German and Esperanto, he however would talk something like 30 other languages fluently, some of them on university level, and probably a few dozen others stammering along—so there would be virtually no one in the entire world he was not able to communicate with, whether they knew Esperanto or not!

On his house he had an enormous antenna in order to receive tv programs from all kinds of countries. He was really an international person. For me he has always been the person linked with Esperanto, or rather the “babelfish” person, the embodiment of internationalism!

I didn’t know however that there has actually been a country where Esperanto was the official language.

Also, it is supposed to be easy to learn.

This is very important.
I wonder how to say Nibbana in Esperanto.

I wonder how to say Nibbana in Esperanto.

Nirvano. You just put an “o” at the end to make a synthetic noun.

How do you say " tree" in Esperanto?

Arbo. From the romance languages. Any other questions you can use GoogleTranslate for, though. It has an esperanto function.

So this is completely new language.
I do not think it is easier than learning French for a person’s native language is Sinhalese.

So this is completely new language.

I do not think it is easier than learning French for a person’s native language is Sinhalese.

Its only easy if you already speak multiple European languages, since it is a blend of all of their most common features. This Eurocentrism is Esperanto’s biggest drawback, which many criticize it for.

One can read it, but it really helps to understand French and/or Italian.

For instance even English speakers cannot naturally understand it, but like I said above, if you know any Romance languages (French, Spanish, Italian, etc.), the above is much easier to understand. It looks like a sophisticated creole/pidgin.

Well, it appears this Esperanto is only good for the Westerners. (perhaps the European Union)

Definitely, and you aren’t the first to point that out.

Incidentally, I actually just realized that English does preserve the arb- Romance stem that Esperanto uses to make “arbo” for tree.

One can see it in the word “arborist”.

Just for an interesting geeky fact: Google Translate can translate Esperanto! And it does a pretty good job on the English-Esperanto.

If the pali is in Binary code, are all your servers arahanths