The Dalai Lama with Greta Thunberg on the climate crisis: an upcoming live event 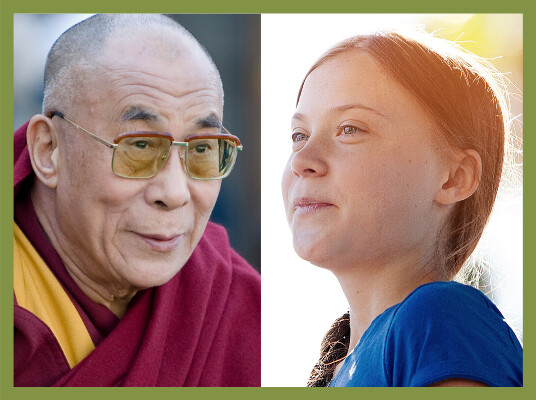 We're honored to host a special free livestream event on January 9, 2021 at 10:30 p.m. EST with His Holiness the Dalai Lama, climate activist Greta Thunberg, and leading scientists to explore steps for addressing the urgent challenges presented by...

It’s a lovely talk with a strong introduction to proferestation -
the art of growing existing forests intact to their ecological potential.

But when I walked down my street tonight, I saw a battlefield of pine trees.
Wrapped in plastic, out on the curb. More than 150 million worldwide.
Yesterday they decorated our houses, today they’re thrown out with the trash.

I speak on behalf of trees as they can’t speak for themselves!
These beautiful creatures are our lungs and deserve our respect and care.
Just like we want to meditate, they want to grow high into the canopy!
They lower the heat in the atmosphere, they refreeze the permafrost
and the Polar ice cap. Why don’t we want to listen to their truth?

Cutting down Christmas trees is threatening our health.
Please, plant a tree today instead of cutting one down every single year.
Many thanks from the trees 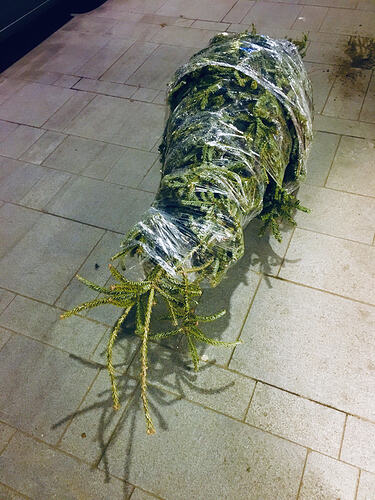 I’ve seen where they sell bananas pre-peeled and wrapped in plastic, and I though that was the worst. But no, actually this is the worst.

Wrapped in plastic, out on the curb.

Here they collect them without plastic, and all decoration has to be removed. They compost them after use, at least … But still …

Wrapped in plastic, out on the curb.

Fortunately, in the United States many Christmas trees are grown on tree farms and then are collected by non-profit groups such as the Scouts to be composted. 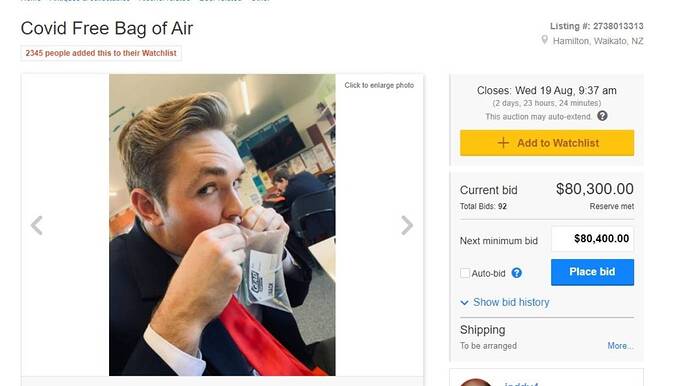 The tongue-in-cheek auction has sparked 102 bids and received hundreds of questions from potential buyers.

I’d say that it is unfortunately so. Young trees are not meant to be commercialised, cut down and composted. They need to grow and live. Our very lives depend on them. No

Swedish American photographer Eric Hegg captured this image of three children around 1898 as they where fetching water from a well, sifting for gold in the Canadian Yukon Territory. Hegg’s work has been donated to the University of Washington. This very image was longtime known to archivists as it depicted very young children working a mining operation. But only later on someone noticed the striking resemblance of the girl in the foreground to a girl who lives today. She’s a time traveller, some argued. But does her future look any brighter today? I leave that to your thoughts. 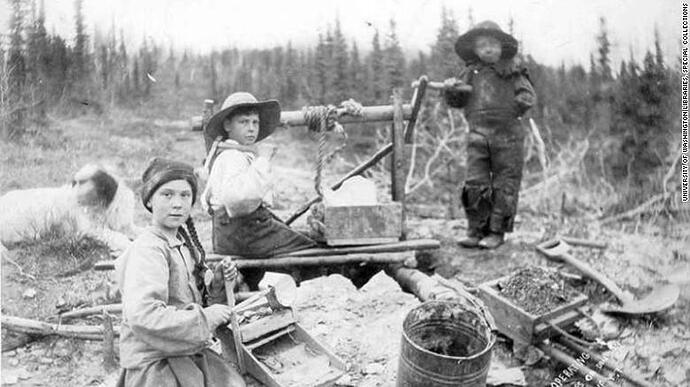 I saw something on reddit the other day from a climate scientist that basically said the damage is done, we’ve released way too much carbon already, there’s no way back, catastrophic/calamitous weather is on its way and it’s going to severely affect the half of the world’s population that live near an ocean or sea.

I have compassion for the poor that will bear the brunt of the damage, and I don’t really know what I mean by this, its not a well-formed thought, but for the planet’s sake, the sooner the human population is reduced the sooner the planet and all the other species can begin the long process of recovering from us being here living in our nasty industrial waste-y ways.

Yes, watch out for the upcoming “tundra event” … 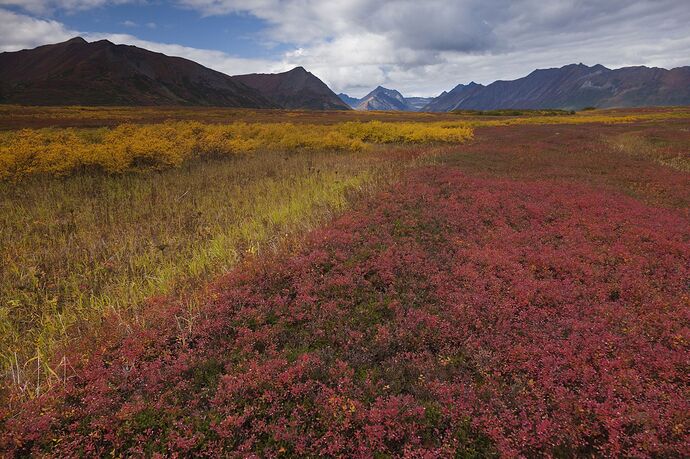 Climate-driven changes in these harsh lands at the ends of the planet could have a worldwide impact.

I sometimes envy Mara for all the fun he must be having watching this all…
And surely this is not the first time, over the eons and universal cycles, that human beings “break a planet”…

The planet is not a sentient being as far as we know, compassion for environmental protection is actually back towards humans and animals. It engages one to go vegan to help reduce global warming.

damage is done, we’ve released way too much carbon already, there’s no way back, catastrophic/calamitous weather is on its way

I sometimes envy Mara for all the fun he must be having watching this all…
And surely this is not the first time, over the eons and universal cycles, that human beings “break a planet”…

It’s eerie how modern humans lived as hunter-gatherers for ~100 000 years, and then the last 10 000 years where the climate has been unusually stable (aka the holocene), we see agriculture and large scale civilizations.

I.e., maybe in 500-1000 years we’re back to our old hunting-gathering ways because the climate is just too unstable for farming to pay off (except this time there’s a huge desert belt going round the equator rather than huge mountains of ice extending from the poles.)

It reminds me of one of the more mythic suttas where the Buddha says that humans at some point in the future “go back to the forests” or something like that, I don’t remember the exact wording. Any idea which one that was?

Swedish American photographer Eric Hegg captured this image of three children around 1898 as they where fetching water from a well, sifting for gold in the Canadian Yukon Territory

An amazing photo on multiple levels! I remember my grandfather telling me of the hard labor he did as a young boy in Yorkshire: crawling inside a drum, laying ship’s cable. No wonder he wanted to come to Australia!

the damage is done, we’ve released way too much carbon already

As Ven Khemarato says, “too much” is relative. For those who have already died, for their loved ones, for all those who are sick, for the species driven extinct, the forests cleared, the billions of animals lost to flames, for the 58 dead in frozen Texas, and all the rest, it is already too late. Climate change is not a future fear, it is our present, and, already, our history.

But for those in the future it is still uncertain. What is certain is that it will get worse, much worse. There is no good scientific scenario for the future, just less bad ones. How much worse we don’t know, and that matters.

Right! That is the norm, what we see around us is the exception. Hunter gatherer peoples were resilient and adaptable. They figured out how to work together, to use resources frugally, to find a balance in nature, and to respond to change. But even they, over hundreds of thousands of years, never had to deal with the kind of climate we are creating today. 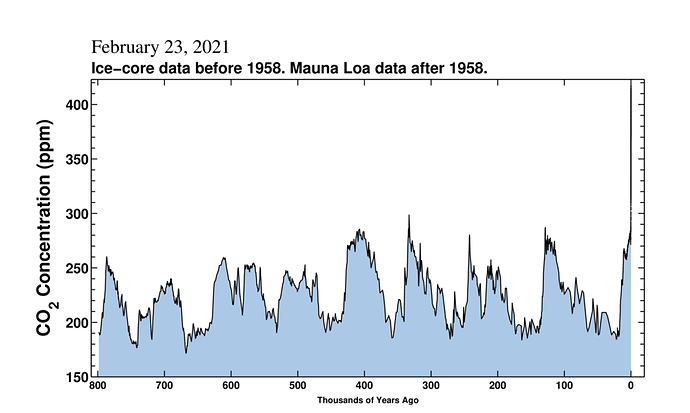 Any idea which one that was?

Then to some of those beings it will occur: Let us not slay just anyone; nor let just anyone slay us! Let us now, therefore, betake ourselves to dens of grass, or dens in the jungle, or holes in trees, or river fastnesses, or mountain clefts, and subsist on roots and fruits of the jungle.

And they will do so for those seven days.

Security & comfort make people fearful, I guess. To me, our modern civilisation is a glittering prison. And a pandemic demonstrates that very well. An inspiring alternative to me is for instance how Miriam and Peter live : Wild at heart: how one woman and her husband live out in the woods | Naturism | The Guardian

It isn’t April Fool’s Day yet, it’s a direct print of the original celluloid image.

An interesting article. This part surely resonates with people who’ve spent time in a forest monastery, where you might have hours with “nothing” to do:

Those first days were indeed a major adjustment, on many levels. I no longer had a job, a project or stimulation like social contacts, email, music and all the rest. It felt as though I was going through withdrawal symptoms. My mind was running too fast, my thoughts were all over the place and endless memories flashed by. Even though Peter appeared tranquil compared to me, he said he knew exactly how I felt; he had not found a million chores to do, but he had read all of the old newspapers and magazines in the hut from cover to cover.

Whenever I read about people who do stuff like this, or decide to quit their jobs and live in a boat sailing around the world, I always wonder the same things as the readers of Miriam’s book:

The question Miriam often gets asked by her readers is how they can afford to live as they do. “We have savings, we live very cheaply: on about $5,000 NZD (£2,600) a year – food basically.”

So they are still dependent on money, and can only live this way because they had a bunch of money saved. The article doesn’t mention what they plan to do once they run out of money. Miriam also keeps telling people “anyone can do it,” but that isn’t true. Anyone with 1) an education - a prerequisite for the next point - and 2) a career that has a high enough salary to first save a substantial amount of money can do it. In other words, people leading at least a comfortable middle class life. I’m not slamming her or her life choice, just adding a bit of realism to the picture that article paints.