The new SC is great but

I’ve been using this site for more than a year now, and I have loved how the site helps me gather all the suttas into one place. I have started using the suttas to learn Pali AND read suttas at the same time since last year, and it had been really helpful. I usually directly send to Notability app on my iPad via a share button while accessing with iPad, but I can’t do it anymore with the updated site, anything sent to the app would be blank, have never encountered anything like this, any suggestions?

I can’t say I know anything about iPads but I will let our developers know. I think this has to do with our Polymer Webcomponent system, which is rather new and not all browsers seem to support it yet. However, for the time being you can also go to legacy.suttacentral.net and access the old website and there it should work again in any case. You just will not have access there to Bhante Sujato’s new translations.

Thank you so much, I didn’t know the old website is still accessible, that would help a whole lot! Sadhu!

There are actually more translations than on the old site.
You can get to them from the dropdown box in the lists of suttas.
So go to the menu on the left, select for instance Digha Nikaya (or go down a level with the arrow on the right to select only part of the DN). Then you see a list of suttas. You see for instance Sujato and Bodhi in green as English translations and next to that a dropdown box that is labelled ‘More’ and there you will find all other translations.

Hope this helps. Would you like me to upload a screenshot (always difficult to just describe these things in just words).

Yes a screen shot would be helpful…

And when you click on the box that now reads Mahasangiti (which is the Pali text), it folds out like this and you can see more translations: 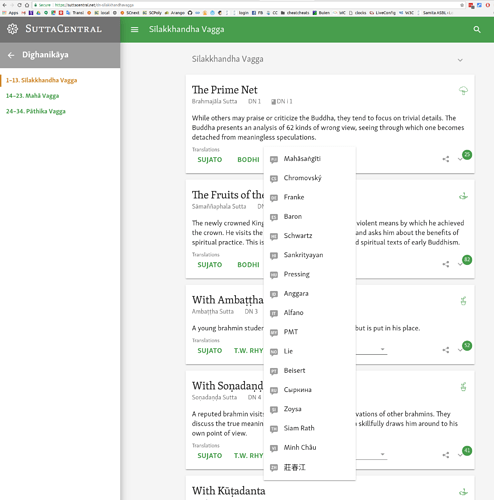 Well it has a list of names whom are presumably translators but it doesn’t specify languages so unless every translator is going to have a generic name that we can recognise is related to the language we are looking for it seems the new system is a bit problematic. Something to think about… can it be tweeked by the developers/management so as to specify language rather than just translators name…?

I agree this is sort of confusing. Surely to most people finding the translation in their language is more important that who translated it. The visual information hierarchy doesn’t really represent this. This is really confusing on the cards where in the compressed form it says ‘more’ then below MAHASANGHITA and doesn’t show the language code.

To me it would be Language: Pali: Mahasaṅghita
Please excuse the crude mockup but something like: 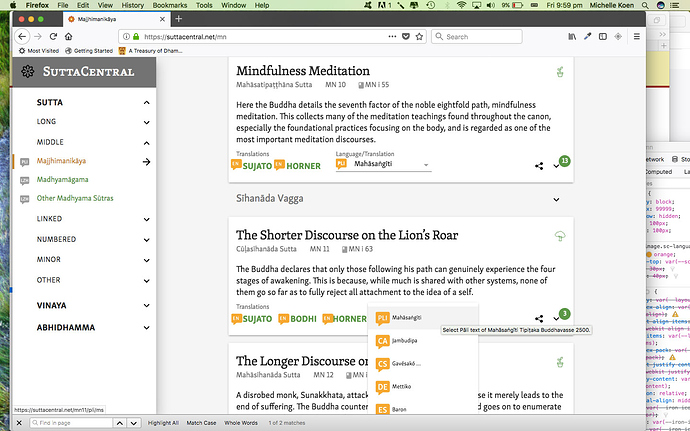 I think a global language and translators drop down from the top of everybody page would be helpful.

The translations shown in green (Sujato, Bodhi, Horner) are all in English because this is your chosen site language as well as the fallback and default language. If you select Polish for instance, you will not see those three and they only end up in the drop-down with a language-baloon ‘EN’ in front of it. Then what you see in green is only the Polish translator (if there is a translation).
Right now we do not have much of the UI translated in other languages yet but we will hopefully in the future.

Hi admin or anyone in the know, fishing around here on a way to download translations in a certain language, tried it before the new site was launched didn’t really work…All I came up with was the ''Use Offline" section which has a download in english at the bottom, maybe a link there to downloading the other languages would be good…Help!?

On the new site: If you click the arrow next to “English” you can select your download language. But note that up to now offline mode only works for Chrome, not (yet) for other browsers.

I meant to ask how to download ‘en mass’ in another language
?

The offline mode means to use offline everything that is there in that language (and in root languages as well if you select this option). You basically surf on the website the same way as when connected to the internet, but only in one language.

I see…So as it is now if i click on use offline…language…it only offers english and polski…does that mean there are no other languages available…?

Ah… no, that’s something different. This language selection is to select the language in which to browse the site, and there will be more languages added later. In order to get to the offline mode you click on “PWA Use offline” in that same list, and there you find the different options for downloading. 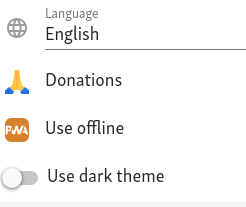 Screenshot%20(6)3000×2000 451 KB
I think were talking about the same thing. Still the problem is only two languages, you mentioned more will be added later meaning now all that is available offline are the two? Correct?. Another thing is when offline it still doesn’t seem to work either…
sabbamitta April 6, 2018, 7:48am #20

Sorry I seem to have been not specific enough. What I want to say is the following: 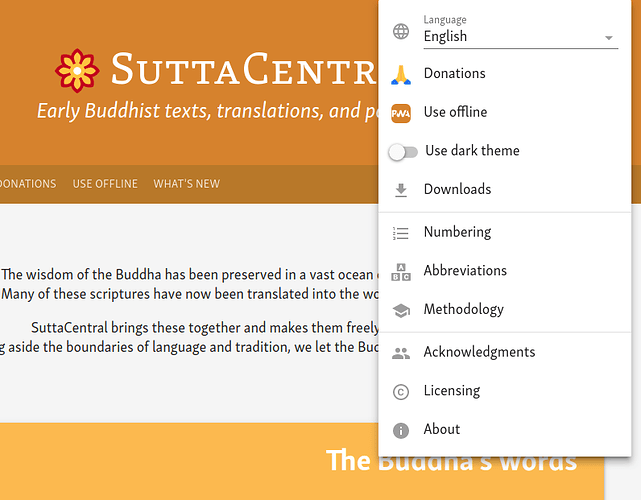 you ignore that language selection option at the top and click on “PWA Use offline” instead.

Then scroll a little bit down until you see this:

When you click here on the language selection arrow you get this: 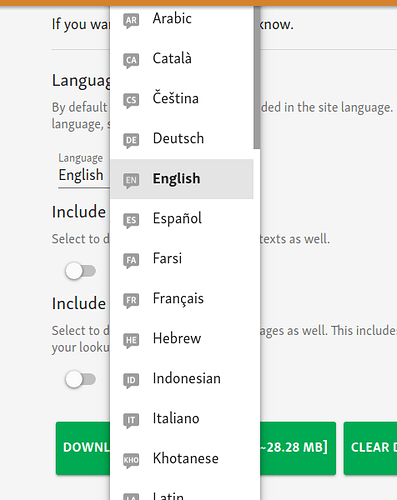 —and there are more languages if you scroll that list further down.

After selecting your language you can still choose whether you want to include parallels and/or root languages, and then click on “Download texts in … [language]”. If you have already tried to download things before better click on “Clear Download History” first, and then on "Download texts … ". In case you get an error message clear download history and try again until the download works without an error, then you should be able to use SC offline in your language.

(You need a good and stable internet connection in order to download without error.)

I hope you’ll find what you’re looking for.