A few months ago, I finished a translation of the five Chinese bhikkhunī pātimokkhas, the collections of the rules for Buddhist nuns. Since then, I have embarked on a translation of the five Chinese bhikkhunī vibhaṅgas, i.e. the explanations of the rules.
Unlike the monk’s rules, the rules for nuns differ significantly between schools. Therefore, comparative studies can be very interesting. Three of the Chinese vibhaṅgas, as well as the Tibetan, have never been translated into Western languages before. 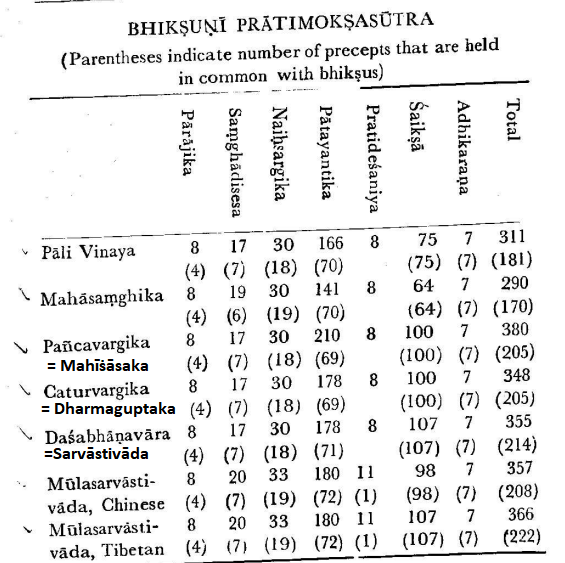 Missing in this list is the Hybrid Sanskrit Lokuttaravāda bhikkhunī vinaya. It is related to the Mahāsaṅghika school and has the same number of rules.

Some days ago, I finished the first draft of the Mahāsaṅghika bhikkhunī vinaya. I also translated the material outside of the vibhaṅga, i.e. the pakiṇṇaka and the garudhammas. Now I’m working on the Dharmaguptaka texts.

This thread is intended for the discussion of interesting points of vinaya that come up during translation. For example, procedures and offenses that differ from the Pāli version, unusual idioms, etc.

As experience has shown, bhikkhunī vinaya threads can trigger strong reactions. Please keep posts friendly and on topic. Off-topic posts will be removed.

Sadhu! Looking forward to translating it all into Portuguese, together with the rest of the bhikkhu vinaya vinhanga I have been waiting for while for a greenlight from venerables @Brahmali and @sujato to resume translation!

I’m absolutely star-struck at the thought you can do this.

It is the only true goal I have in this life: translate to Portuguese as much as possible of the great work you venerable friends have been doing in terms of translating into modern and clear English these valuable texts!

I am star struck, as well. And looking forward to comparing.

Thank you for the hard work you’re putting into this Ayya @vimalanyani!

It is the only true goal I have in this life:

It is a worthy goal, indeed!

Wow Ayya!
I’ll be very interested to see this work once it’s ready… It’s not already somewhere on SC and I’m not seeing it, is it?

you can do this.

I was quite surprised myself…

It is the only true goal I have in this life: translate

How about attaining nibbana?

It’s not already somewhere on SC and I’m not seeing it, is it?

No, and it won’t be there for quite a while. There is a problem with the Chinese texts on SC, which needs to be solved first by SC team members. Then, I have to manually segment the texts and do the proof-reading. At the moment, there is no timeline for this. If you want to speed up the process, nag Bhante Sujato a little, so that the textual issues get a higher priority on SC’s endless to-do list…

In modern Theravada, there is a commonly held belief that arahants can’t/don’t break pātimokkha rules, as their sīla is perfected and thus their behavior is naturally pure.
In contrast, the Mahāsaṅghika bhikkhunī vibhaṅga has a number of rules that were laid down because of the behavior of arahant nuns.
One rule was even caused by Mahāpajāpatī herself:

Pc 125: If bhikkhunīs are quarreling and don’t live in harmony, and the group’s leader doesn’t take action to settle it, it is a pācittiya.

A few others were laid down because of arahant Jetā bhikkhunī. Jetā has some kind of complicated love-hate friendship with Thullanandā and the two nuns interact in many origin stories. Usually, it’s Thullanandā who misbehaves, but in a number of cases, it is actually the arahant…

Ss11:
If a bhikkhunī with an undefiled mind receives robes, bowls, drinks, food, liquid remedies and medicines for the sick from a man with a defiled mind, it is an immediate saṅghādisesa offense.
(Jetā knew that the man was in love with her, but didn’t pay attention.)

Pc107:
If a bhikkhunī waits overnight before giving full ordination to someone who has been purified in one sangha, it is a pācittiya.
(Jetā refuses to have her student ordained by the notorious group-of-six bhikkhus and waits overnight for good bhikkhus to carry out the ordination.)

Pc131
If a bhikkhunī does not respect the half-monthly purity and uposatha, it is a pācittiya.
(Jetā feels that she doesn’t need to attend the uposatha, as she is already an arahant.)

Pc133
If a bhikkhunī has an abscess in a hidden place above the knees, below the shoulders, and without informing anyone and being permitted, has a man to open or wash it, it is a pācittiya.
(Jetā got treatment from a male doctor.)

Bhaddā Kāpilānī, called Bhadrā Kāpileyī in Sanskrit, who in the Pāli canon is the arahant nun foremost for the recollection of past lives (An 1.244), causes 16 rules to be laid down in the Mahāsaṅghika vinaya. This makes her one of the most notorious nuns. It is not explicitly mentioned if she is an arahant but from context, it would seem that she is not.
Interestingly, she also regularly appears in Theravada vinaya, but there, it is usually her students who misbehave.

How about attaining nibbana?

I am not an optimist!

Great Job! So I can translate to Bengali and Hindi