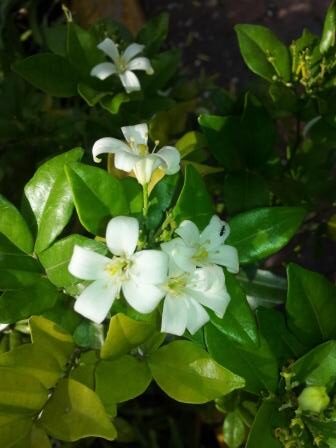 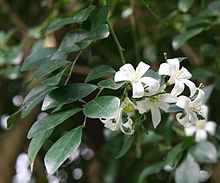 Murraya paniculata, commonly known as orange jasmine, orange jessamine, china box or mock orange, is a species of shrub or small tree in the family Rutaceae and is native to South Asia, Southeast Asia and Australia. It has smooth bark, pinnate leaves with up to seven egg-shaped to elliptical leaflets, fragrant white or cream-coloured flowers and oval, orange-red berries containing hairy seeds. Murraya paniculata is a tree that typically grows to a height of 7 m (23 ft) but often flowers and fo...

For none of them I can see the name “Indian Rosewood”. Where does it come from?

It may mean different trees, but my Sanskrit dictionary says it refers to Dalbergia Sisoo, often called Indian Rosewood, so that’s the reason I translate siṁśapā that way, since it agrees with other sources and grew in northern India.

Ah, thank you! That might be the same source where Bhante Sujato has it from.

If the choice is between members of the Dalbergia and the Murraya genuses, I should think the former would be much more likely. Murrayas are rather small and a group of them would be more of a shrubbery than a forest. Since they wouldn’t provide any canopy it’s hard to imagine why bhikkhus would want to live in the midst of them. (Unless of course they’d been set a challenge by the knights who say “Ni!”). Oh my goodness … ! Me who has never watched any such movie!

A handful of leaves: 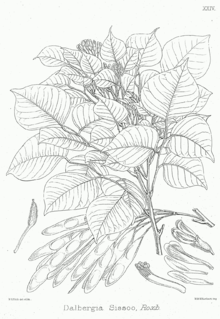 Dalbergia sissoo, known commonly as North Indian rosewood, is a fast-growing, hardy deciduous rosewood tree native to the Indian subcontinent and southern Iran. D. Sissoo is a large, crooked tree with long, leathery leaves and whitish or pink flowers. D. sissoo is a medium to large deciduous tree with a light crown which reproduces by seeds and suckers. It can grow up to a maximum of 25 m (82 ft) in height and 2 to 3 m (6 ft 7 in to 9 ft 10 in) in diameter, but is usually smaller. Trunks are ...