What does the Buddha say about actions in self defence?

I was walking my small, fluffy dog this morning and reflected on the question, what shall I do if she would be attacked by vicious, aggressive pitbull? 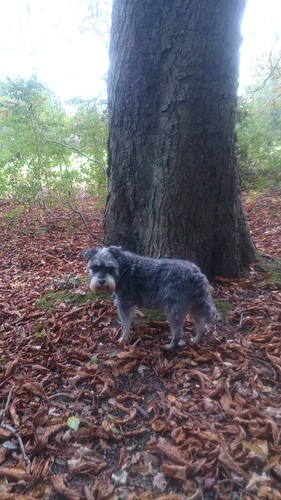 That reminded me MN21:

So even if someone strikes those nuns with fists, stones, rods, and swords in your presence, you should give up any desires or thoughts of the lay life. If that happens, you should train like this: ‘My mind will be unaffected. I will blurt out no bad words. I will remain full of compassion, with a heart of love and no secret hate.’ That’s how you should train.

To widen the question: if there is any crime happening, should you just call the police or take the action? To what extent?
Are there different rules for lay and monastic?
One monk chased a cat hunting a bird because of compassion towards a bird. The other exercised the equanimity towards kamma and the law of nature.

We meet with violence and suffering very often. It is somehow easier to accept when it is you who is hurted. Worse when you are a witness.
What to do? What are your opinions and what EBT says about it?

In terms of your dog being attacked by a pitbull…I personally would try and stop that even if the other dog got hurt. It’s either that or LET it happen, which then means you will be responsible for your choice of letting it happen.
You took intentional responsibility for your dog already, which by the looks of him, he is happy about.

You took her to the park, and so whatever happens there, you will be partly responsible and so now you can only do the best you can i.e don’t try to kill the Pitbull.

Is it cruel to stop another animal killing another animal? That Pitbull’s feeling won’t be hurt, he will go on looking for the next thing to do. The act of your hitting him will soon be forgotten by him. You might not forget so easily, but that’s the dangers of owning pets or having children etc you are responsible…and ALL sorts of things could happen.

What I would do to the Pitbull if it were attacking her, I cannot say here…

It’s up to you to know where responsibility lies, before you take things up, …because when you do, then you will be responsible.

As for the title of the thread…actually, monks are allowed to kick a person off of them, if their celibate life is at risk.

Self-defence is ok, but one would have to be very aware of one intentions because the intention to escape may be present and then an intention based on hate might arise as soon as one has escaped, which could result in the intentionally killing someone.
So for a monk, there would be no offence for kicking a person to escape the rape, but if he escaped and then came back to try kill the person…that would be a serious offence.
Tricky business, living in the world where shit happens.

what shall I do if she would be attacked by vicious, aggressive pitbull?

The are no vicious, aggressive pitbulls - there are just pitbulls that are currently being vicious and aggressive.

To rescue her I would have to seriously hurt the other dog.
What about the kindness and compassion?

What you do is dependent on how skilled you are, and your wherewithal at the time of the attack. If you are skilled in the ways of pitbull then neither you nor the pitbull needs to come to any harm. If you intercede without the necessary skills or if you have the skills, but (for example) you attempt an intervention while you are tired or lacking the appropriate level of mindfulness, then you will probably end up in trouble, potentially making it worse for you and your dog.

As these things happen so fast, it is unlikely that there will be any time for a conscious reaction, so what you do will be dependant on your training in these things and your habitual reactions. But you should (as a practitioner) be able to mindfully watch your actions which should be of great benefit to the outcome.

One monk chased a cat hunting a bird because of compassion towards a bird. The other exercised the equanimity towards kamma and the law of nature.

Save the bird, feed the cat.

These two pre-existing threads about this topic might be of interest to you:

In your opinion, is it the only way to make a better world by breaking the precepts? The Watercooler

Continuing the discussion from Is it ok to take some alcohol occasionally?: They all are dependently originated phenomena. Think about what is Jewes doing to Muslims in Israel. Genghis Khan went back after chasing the Europeans all the way back to Europe. He was trying to protect his homeland. Even in Sri Lanka Tamil Terrorism is a reaction to the ill-treatment by majority Sinhalese. ( I am a Sinhalese by the way)

A Hindu friend of mine asked me to talk to his friend who is an active practitioner of the Ananda Marga teachings. At first, when we chatted a little bit about this and that, and it seemed like Ananda Marga is a regular-type Hindu organisation that is all about uniting with our paramatman and practicing loving kindness without restraint. Then, he suddenly mentioned a couple of beliefs that immediately alarmed me, especially in the light of my Hindu friend telling me Ananda Marga was involved in …

This topic also seems directly related to your question
https://discourse.suttacentral.net/t/what-is-the-kamma-for-killing-in-self-defense/5495
[What is the kamma for killing in self defense?]

It is always worth checking through past topics so that the same questions do not need to be duplicated.