What happened to user icons?

Today suddenly some of the user icons look a bit strange:

This is what it looks like on Firefox. On Chrome, they have disappeared altogether.

Some others however are perfectly fine.

Anyone knows what happened? @Aminah?

Yeah, I spotted that too, but only with respect to one user and had assumed there was an issue with an image they’d uploaded (the icon pictured in your OP is a broken image icon). Have you seen this for several users?

Have you seen this for several users?

At least two.
Three.
And I’ve also seen it in quotations of users whose icon looks otherwise fine.

Hmm, well I guess two is an issue

Problem encountered 2 times
As soon as a problem gets encountered twice (twice by you, or twice by two different people in your team/family) then you’re in infinity territory. If it can happen twice, it can happen a thousand times. This is the right time to solve it good and solve it once.
(Solve It Once, Dave Geddes)

Hmm, well I guess two is an issue

I think it is—it’s more than twice (see my edit; sorry you might not have seen it.)

hello im having trouble with users default profile image not showing. Admin profile image shows but not users. how can i fix this ?

Mine has disappeared too, so not getting notifications.

Mine has disappeared too, so not getting notifications.

I can see your user icon perfectly fine.

Edit:
After posting your user icon shows in the quote, but while I was writing it didn’t show inthe preview.

Mine has disappeared too, so not getting notifications

This screenshot shows several broken images where user icons should be: 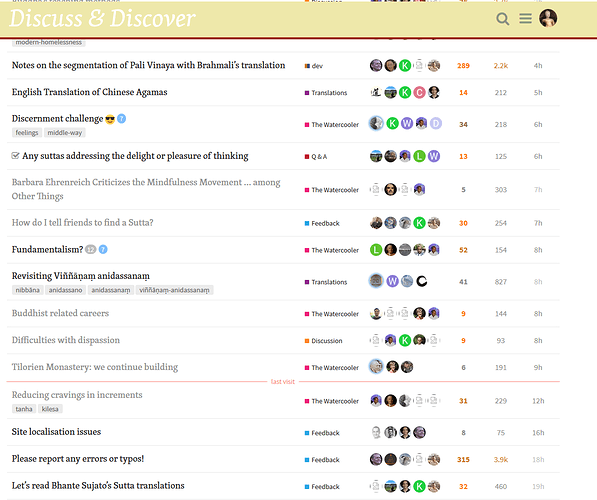 Alas, my full skill set goes only as far as standing next to people with actual skills. The post Musiko linked to sounds a likely explanation and is probably worth keeping an eye on. I guess Blake will probably need to have a look at it if it persists.

Some people’s user icons look fine next to their actual posts, but not next to the “like” button.

I guess Blake will probably need to have a look at it if it persists.

Thanks for taking care anyway!

Indeed, this sounds like a Discourse issue so it will most likely be fixed with the next update. Nothing to do but wait.

SuttaCentral pages are quite complex and involve many requests to the internet. Sometimes those requests fail because of mischievous devas playing badminton with Ethernet packets. To address these issues, browsers often cache things like pictures on local computers.

The magical incantation of CTRL-SHIFT-R is a summons to emphatically summon all web page resources summarily from the internet. This complete page refresh serves to chivvy the devas into cooperation and may need to be issued several times in succession (there are many devas out there). I see all your icons after three such summons.

I see all your icons after three such summons.

Here they still play badminton after 10 or so such summons…

@Blake, we are getting persistent 404 errors on some user icons. Here is a consistent failure.

metoo. What I did then was to delete the firefox-cache-entries/files and restart firefox. Then my own icon was visible again, but still some users’ icons not. Like in the screenshot of Metaphor.

The fix for this is a simple restart of a Discourse container, which only server admin can perform: tagging @blake for assistance

Restarting the container solves it. ./launcher restart app The problem is that nginx resolves the IP address of avatars.discourse.org only on start or config reload and that we recently changed the CDN for that domain. I’m sorry for the...