A regularly occurring question that Buddhist monks get from Westerner Buddhists is this: “What is Buddhism doing for the environment”? Since the natural environment of ancient Jambudipa, 2500 years ago, was pristinely pastoral, there was no thought...

I don’t think there’s anything in the vinaya that makes an explicit distinction between riding in a vehicle and piloting / steering a vehicle.
Even if an ancient monastic had gone around in a horse carriage, they wouldn’t have been the ones holding the reins. There usually would have been charioteers to do that.
So the rationale for not riding a bike is on very flimsy grounds here.

I don’t really go along with this reasoning though. I think you could easily find equally (or more) logical arguments to allow riding on bikes.

I wonder, what would be the Dhamma perspective behind allowing a monastic to ride in an animal drawn carriage but not allow them to pilot one?

If the carriage is drawn by an inanimate force such as the wind or an engine, simply piloting it should be kammically neutral? That is, if one does not intend to run over living beings in one’s path at least…?

So, is piloting a raft or a sailboat allowable for a monastic?

I think you have an excellent point.

I’m a bhikkhu. My parents, living in the Netherlands, go everywhere by bicycle, 100+ kilometers even. So if I’m with them (and the main reason I’d be in the Netherlands is to spend time with them) it’d be unreasonable for me to insist we travel by car. And so I did use a bicycle there. This regardless of environmental reasons, just common decency. At first it felt somewhat “unmonkish” but then I realized it’s just habit of perception I had.

I’ve also heard that some monks in Switzerland use bikes, and some nuns in Europe also.

To me it is also sensible that it should be allowable. The bike is used around the world by people who can’t afford cars, let alone a plane ticket. Therefore it is more suitable for monks, I’d argue, than going by car or plane.

And if we go by the “Great Standards” I’d argue cycling is more like walking than riding an animal, since it’s self powered. (Or preferably, in the Netherlands, wind-powered: Dutch Headwind Cycling Championships - Wikipedia)

I’m interested what the lay people think. Since many of the Vinaya rules are laid down because of the public perspective, I think it should be considered just as much as the texts.

But, Venerable, that bike on the picture is a men’s bike. How do you make it work with the robes?

I used a women’s bike.

The main mode of transportation for Buddhist monks and nuns—as well as the Buddha, for many of his long travels—was, and mostly still is walking. Even more so, it should technically be done without footwear (this is still followed in many Buddhist countries). Although, the Buddha allowed footwear in difficult terrains which would result in harming one’s feet (which in modern times has been extended to “all the time”).

Regarding environmentalism, I don’t think using the modern issue of environmentalism to justify re-interpretation of the Vinaya is valid. Even if the Great Standards is used, this is normally for very serious issues, or to actually reduce one’s worldly options rather than increase them.

And even if they were allowed, would bicycles reduce pollution that much? Wouldn’t walking instead of manufacturing or fixing up bicycles for monks be environmentally better? After all, walking and cycling both get you to where you need to go with relatively similar amounts of time.

the Buddha always allowed the usage of any means of transportation in the Vinaya, just so long as it was humble . In ancient Jambudipa, if you were rich enough to own an elephant, horse, horse-and-chariot, or horse-and-carriage, these were all status symbols, and symbols of power. It was effectively only the upper-class members of the Brahmin and Warrior castes who could afford these. The Buddha forbade monks to “high-horse” it on any of these vehicles.

I don’t think the Buddha allowed any means of transportation, and also, it would be difficult to imagine his only criterion was if it was “humble or not.” Surely, a donkey wasn’t a status symbol, yet no monks during the time of the Buddha owned donkeys, or used them for their travels?

And, with the same reasoning, if bicycles are to be allowed, shouldn’t rollerblades, skateboards, e-bikes, and so on, technically be allowed? Why not a motorcycle, rather than having a lay person drive his/her car?

means of transportation, than business-class seating on an airplane, or even riding a palanquin , borne aloft by medieval-style servants. Monks riding bikes would likewise be seen as more arrogant and ostentatious than a monk being chauffeured around in an SUV, with no passengers in the back seat. This algebra of false humility is clearly an inversion of logic, which undoubtedly violates the modern sensibilities of Western Buddhists.

This is mostly a red herring (it consists of half of the text, after all, so it is best to address it). I’m sure most reasonable monks would consider business-class tickets on airplanes lavish and against the Buddha’s teachings, and the same for a palanquin or an SUV with a chauffeur—even if technically not against the Vinaya.

The above is then used as a basis for the second premise, that if this “lowly” thing is allowed, then this should also be allowed. And then, as the conclusion to the argument, this is used as some kind of a false dilema/appeal to emotion, of painting “Buddhism” without bicycles as “against the environment”:

If Buddhism wants to show that it cares about the environment, it should quit its obstinate attitudes towards bikes - pretending they don’t exist somehow for monks - as this is obvious and low-hanging fruit for Buddhist monks to do their part for the environment, and show that they care about the sensibilities of Westerner Buddhists.

Although bicycles would seem rather common sense for Buddhist monks/nuns to have, if this would be allowed by Vinaya standards, what would be the likely result (which is the question that needs to be considered)?

However, I’m not saying you shouldn’t use bicycles. If you think this doesn’t go against the Vinaya, feel free to do so. What I’m saying is that saying they should be accepted according to the Vinaya is another thing altogether. In other words, one can make the claim that “monks/nuns using bicycles is beneficial for the environment,” but to make the claim that “because bicycles are beneficial for the environment, they are accepted according the Vinaya” is another thing altogether.

I’m interested what the lay people think. Since many of the Vinaya rules are laid down because of the public perspective, I think it should be considered just as much as the texts.

I think seeing an occasional monk or nun on a bicycle in a European country wouldn’t be bothersome. However, it’s important to keep in mind that at the time of the Buddha, and in Buddhist countries like Sri Lanka, Thailand, Myanmar, there were/are many thousands of monastics.

If bicycles would have been allowed at the time of the Buddha (if they would have existed), or would be allowed for monks in countries like Sri Lanka, Thailand and Myanmar, I don’t think the lay community would be thrilled about it (it would likely create more issues than anything else, such as congested traffic and accidents).

Good question! It came up when I was at Santi, and one of the nuns liked to bicycle. I don’t think the Vinaya is decisive one way or the other; it’s simply a different form of transportation than was considered at the time. But it’s healthy and simple. And it’s an accepted, even archetypical, thing for religious figures in western cultures. So I say, yes!

I’ve considered getting a bike here in Harris Park, but it wouldn’t be very useful. Most places we can get easily on a train, and Sydney as a rule isn’t very bike-friendly. But when we can, we walk places.

This is the future… 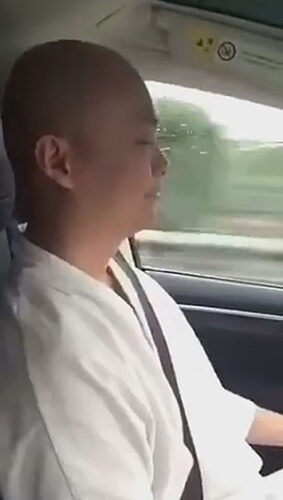 Moment Monk Meditates In Lotus Position At Wheel Of Self Driving Tesla - News...

This is the moment a Buddhist monk meditates with his eyes closed and hands at his side while in the driver’s seat of a ‘self-driving’ Tesla.

This is the future…

However, after the video was widely shared on the Chinese social network Douyin, the traffic police reportedly launched an investigation as they suspect the monk was travelling over the speed limit at the time.

I know of monks who have traveled on airplanes.