Why did Suttacentral change the translation of the Brāhmaṇadhammikasutta? 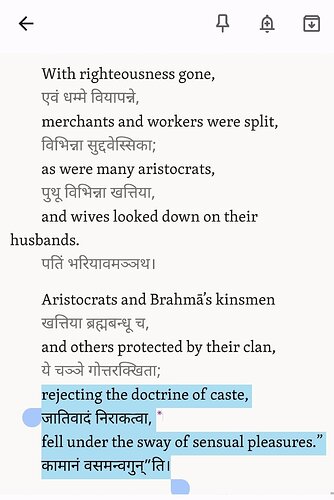 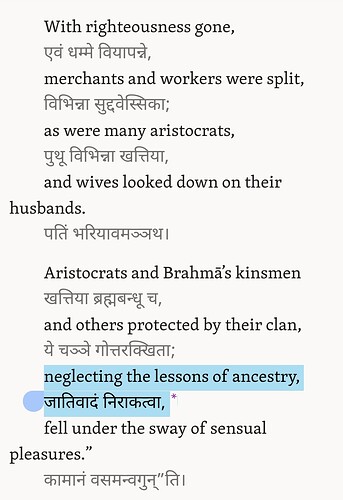 From “doctrine of caste” to “lessons of ancestry”

What is the basis for translating “जातिवाद” as “lessons of ancestry”? The doctrine of caste seems to be a correct translation of the orginal word.

Interesting question. It would be helpful to include the sutta number SNP2.7, which creates a link to the sutta, or supply the link, e.g. SuttaCentral

Also to tag Bhante @Sujato, so that he sees the message.

And as to the second problematic passage, jātivāda
in the Suttas doesn’t quite mean “doctrine of caste”. Rather, it refers to one’s own ancestral lineage. So it doesn’t mean that they became corrupt because they rejected the doctrine of caste; rather, it is because they neglected their ancestral heritage. This reinforces the central message of the Sutta, and it doesn’t require an odd apparent endorsement of caste.

Thanks for the link, Danny!

Let us know if that answers the question.

On the surface, “doctrine of caste” seems like the correct translation for jātivāda. But it doesn’t really square with the contextual usage in the Pali.

To my surprise, I find that the term jātivāda doesn’t appear in the Sanskrit Dictionaries. The closest seems to be jātidharma, which is said to mean simply “caste, duty”. 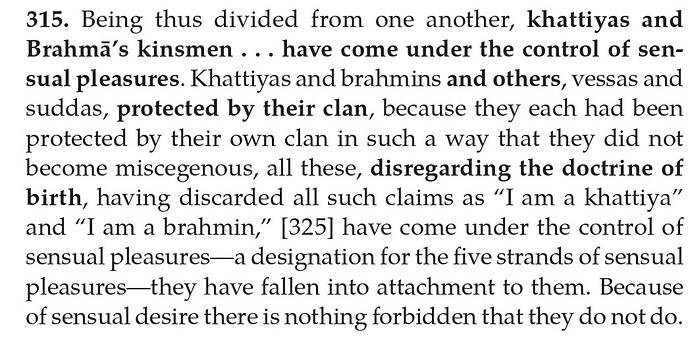 The passage says that people are rejecting their own claims to caste, i.e. their own ancestral knowledge, not that they abandon the theory of caste.

For I am well born on both my mother’s and father’s side, of pure descent, irrefutable and impeccable in questions of ancestry back to the seventh paternal generation.

Impeccable in “doctrine of caste” doesn’t fit at all. Bodhi has “with respect to birth” which seems to ignore the -vāda portion.

What I am thinking of is that in India today, and presumably for a long time in the past, there are, so I have heard, pandits who preserve long lists of geneologies and ancestries. You can pay to look them up. They’re used for arranging marriages and the like. So I am imagining something like this, like a knowledge or lesson or doctrine that records ancestries. The point of this passage is that if somone decides to pull something like this up, you have no worries. A bit like getting a paternity test today!