Or how it actually works ?

Is it a way of meditation ?

Based on those two numbers, I’d guess you’re referring to SN 56.11 and knowing each of the 4NT in 3 ways, giving you a total of 12 knowledges.

I’m not aware of anyone explaining how this is a meditation beyond reflecting upon it.

“‘This is [full comprehension] the noble truth of the way leading to the cessation of suffering’:

“‘This noble truth of the way leading to the cessation of suffering is to be developed’: [further practice to be done]

“‘This noble truth of the way leading to the cessation of suffering has been developed’ [practice is completed; enlightenment]:

“‘This noble truth of suffering is to be fully understood’:

“‘This noble truth of the origin of suffering is to be abandoned’:

“‘This noble truth of the cessation of suffering is to be realized’:

“‘This noble truth of the way leading to the cessation of suffering is to be developed’:

Is not above supposed to be
Second turning ?

I hope this helps. This is of course my understanding of it.

Is not above supposed to be
Second turning ?

No, I think it is the first turn. Please see the pdf I posted.

Hi , I can open the pdf, but how to get your above 4 noble truth pdf to open and paste it here , so that I can ask you the difference between our understanding ?

This my impression of the 3x4 mentioned in the SN56.11 (dhammacakkappavattanasutta.) 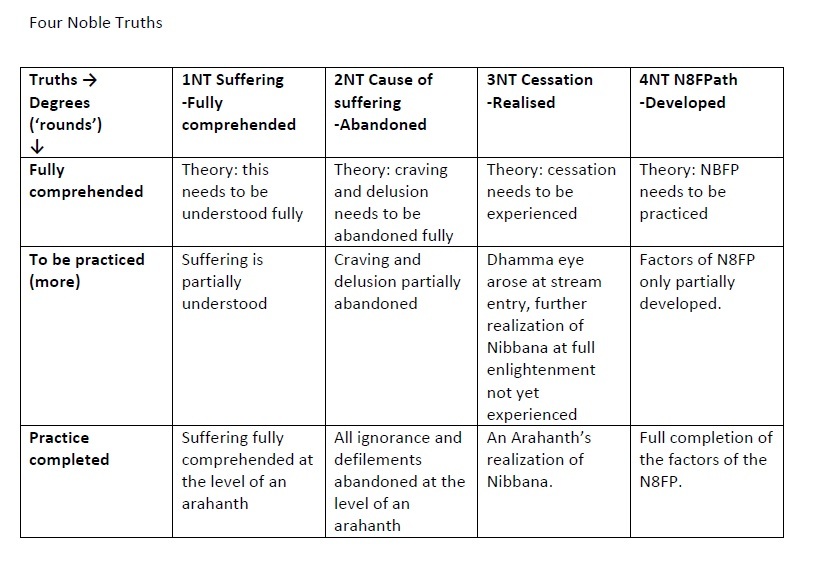 Thanks Mat! It’s so helpful to be reminded of this simple map (and how incredibly easily I forget it).

Now, I know your matrix has been draw up to clearly set out the basic point (and, of course, conforms to the teaching as it is given), so I equally the direction in which I’ll take things here doesn’t really speak to the purpose of the table you’ve generously shared.

Nevertheless, when looking at it my mind did start wandering here and there pausing on how the given components obviously bleed into each other, dwelling in particular on that last row and how - to the best of my understanding so far - it represents one, unified, ‘ever-lasting’ instant .

As I say, it’s not the job of your tool to show how these aspects aren’t, in practice, discrete from each other, yet this is where idle pondering led me (thanks for the reflection 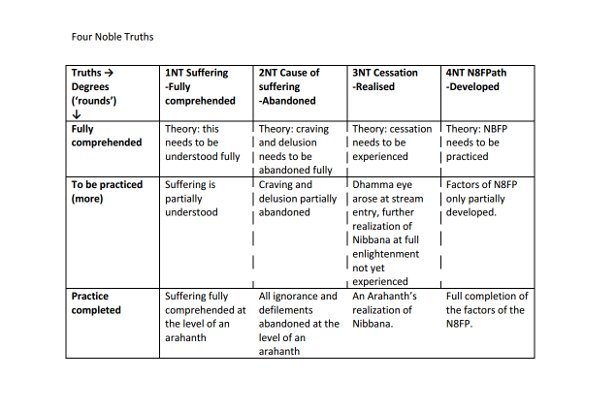 Does anyone know of a suta where this 3x4 scheme is mentioned with regard to someone other than the Buddha himself? SN 56.11 is the only sutta I can recall that uses this theme. It’s crossed my mind that perhaps the full and comprehensive 3x4 knowledge from SN 56.11 is unique only to Buddhas. His arahant disciples obviously understand the 4NT deeply enough to put an end to dukkha, but it’s possible they don’t understand them as deep as the Buddha.

Then again, none of this is mentioned in the Tathagata powers, though you could argue that those powers are a result of more comprehensively understanding dukkha.

I wonder what the commentaries have to say…

I recently learned from a monk,
saying one attain dhamma eye
In the first turning !
different from your chart
which shows dhamma eye
Happens at second turning !

how the given components obviously bleed into each other, dwelling in particular on that last row and how - to the best of my understanding so far - it represents one, unified, ‘ever-lasting’ instant .

"There is the case where a warrior is skilled in his stance, able to shoot far, able to fire shots in rapid succession, and able to pierce great objects…

According to the above sutta the Four Noble Truths (4NT) are penetrated sequentially and rapidly. One may fully appreciate it only after the fact (see my next post). The person who comprehensively understands suffering (aggregates, three marks etc) naturally develop insight into phenomena which attacks the cause of suffering (craving and delusion), which when is removed, the entire Dependent origination starts collapsing (‘cessation,cessation’) and Nibbana is realized. It is only after that that one can know the Buddha’s path of practice -the Noble Eightfold Path (N8FP), is effective in stopping suffering.

So the when comprehension of suffering reaches a pinnacle, insight (vijja) reaches a pinnacle, ignorance (avijja) is suppressed (stream entry) or eradicated (full enlightenment) which results in an experienced of Nibbana and after emerging from it one can know that the N8FP works. This is my understanding of how the 4NTs happen in quick succession. Further reviewing knowledges (paccavekkhana nana) may arise after realization of nibbana to show that defilements are fully eradicated (asavakkhaya nana), suffering is ended, no more births etc.

Realization of Nibbana happens in an instant, but there are other precedent and antecedent events around it.

It’s crossed my mind that perhaps the full and comprehensive 3x4 knowledge from SN 56.11 is unique only to Buddhas. His arahant disciples obviously understand the 4NT deeply enough to put an end to dukkha, but it’s possible they don’t understand them as deep as the Buddha.

I agree. I think there can be a stream entrant who finds it difficult to formulate his or realization even in terms of a ‘single turn’.

I recently learned from a monk,
saying one attain dhamma eye
In the first turning !

I think I agree with that monk!

So, is it dhamma eye first ,
ignorance later ?
or ignorance being
suppressed first
And dhamma eye arises later ?

So, is it dhamma eye first ,
ignorance later ?
or ignorance being
suppressed first
And dhamma eye arises later ?

Understanding dukkha means understanding the aggregates, causality etc, components of insight (‘vijja’) according to the three marks (anicca, dukkha, anatta). We know ignorance (‘avijja’) is fully abandoned (the fetter of ignorance) at Arahanth level. Yet a lot of insight work happens at stream entry level. So for the ceasing order of the dependent origination to happen, and nibbana/dhamma eye to occur, ignorance must be fully suppressed (not fully eradicated as that happens at the arahanth level). It becomes possible to get a glimpse of nibbana when 3 of the 10 fetters are broken (self-vew- ‘sakkaya ditti’, attachment to rites and rituals- ‘silabbataparamasa’, doubt- ‘vicikicca’). These fetter seem to ‘bind’ the mind to the experience of samsara. When they are weakened a glimpse of nibbana ensues.

The Dhamma eye is a glimpse of nibbana- the experience of attainment. It doesn’t teach or ‘show’ any dhamma as such.

What do you mean
by ignorance then?

According to the above sutta [AN4.181] the Four Noble Truths (4NT) are penetrated sequentially and rapidly.

Thank you so much for this, Mat! I’ve never come across this before so it’s absolutely fascinating to see this rapid succession model outlined.

I have to admit to having a bit of a personal apprehension about wondering too much about the precise nature of the attainments and, while feeling there is an important place for reflecting on the ultimate goal described by the Buddha, on the whole I like to keep focused on the aspects of the path more immediately relevant to me.

Having issued this disclaimer - ie. I take no responsibility for the hazards of speculation

- I would just like to offer a few thoughts about the point based on my best text interpreting skills (also prone to hazards): the sutta in question seems to be dealing specifically with crossing over into stream entry which necessarily means the practice is yet incomplete.

At the point of saying the practice is fully complete, I can’t see how any one of the four highlighted elements in the matrix are not effectively ‘synonyms’ for each other (eg. in fully comprehending suffering, one fully understands the causes of suffering and vice versa, etc. - they are stating the same thing).

Broadening things out to consider development before reaching the ultimate goal, while completely agreeing that “there are other precedent and antecedent events around it”, at this point at least, I am definitely a little cautious about give too much weight to the linear model given in AN4.181 in respect to wider, ‘everyday’ practice.

Again, to me the ‘rapid succession’ detail seems to point to the exact moment a trainee makes the breakthrough. I don’t know how right it would be to apply this to the general cultivation of insight into the Four Noble Truths, which actually has an amount of circularity fundamentally embedded in them.

In short: it’ll take quite a concerted effort to wean me away from the view that this practice is wonderfully messy, that the development of understanding in one of the truths feeds into and develops the others and that this isn’t always a linear progression.

True. The Buddha said there were many things he was aware of but taught only a little of it, necessary for the trainee to progress on the path. If he taught this there must be a reason. Maybe to identify incidents of true realisation?

There is some overlap initially. For example understanding the cause of suffering (as in the Dependant Origination) or causality can lead to a understanding of anatta, which is a deepening of the understanding suffering (Dukkha). However when the practice reaches culmination in Stream entry the ‘rapid succession’ results.

The Four are distinct in that watching phenomena arising and passing away (Sankhara dukkha) is the deepest practice in the first truth. This can be quite difficult practice.

Seeing causality, impermanence, unsatisfactoriness (nibbida, viraga, nirodha SN22.59) and not-self (anatta) would be the practice in insight (vijja) leading up to the second Noble Truth.

The arising of the Dhamma eye would be the 3rd Noble Truth and so on.

I appreciate that it is not linear. However it’s useful to explore some of these less well known teachings as well.