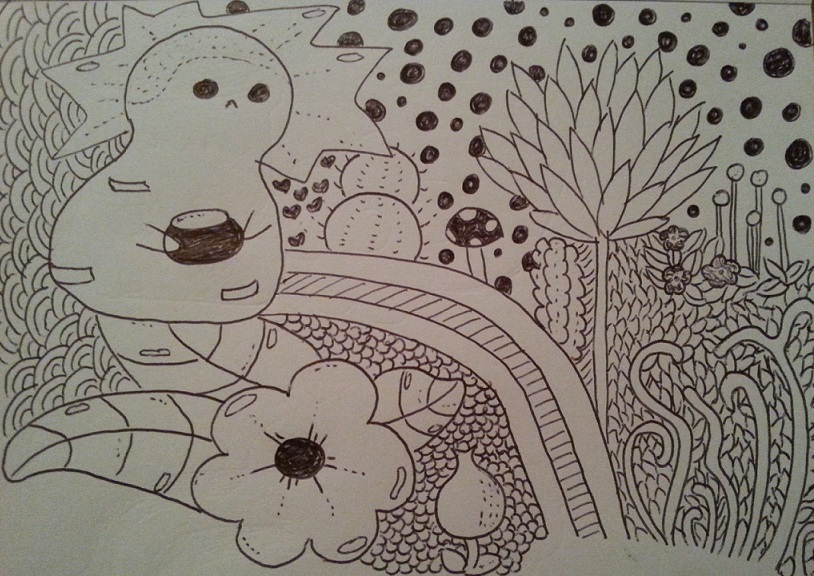 on almsround814×576 208 KB
44 Likes
[BGL] A New Course on "Imagery in the EBTs"
SuttaCentral traffic
2019: The Year in Review
My new project: recording the suttas :studio_microphone:
I don't know how to easily filter posts in massive threads by username, until today
Coemgenu November 19, 2017, 8:48pm #2

Such a happy emoticon for such an upset nun!

I used to have a nun-friend who made lots of Dhamma-Doodles about her life as a nun! It’s great therapy. Maybe all monastics should do that!

@Vimala, please do post if you have drawn Dhamma-Doodles about a nun!

I’m afraid I don’t have any. This was 5 years ago and she has moved to Thailand and as far as I know they were never digitized. But maybe Ven. @Yodha has a few more?

Here’s another one: Teaching the four noble truths. 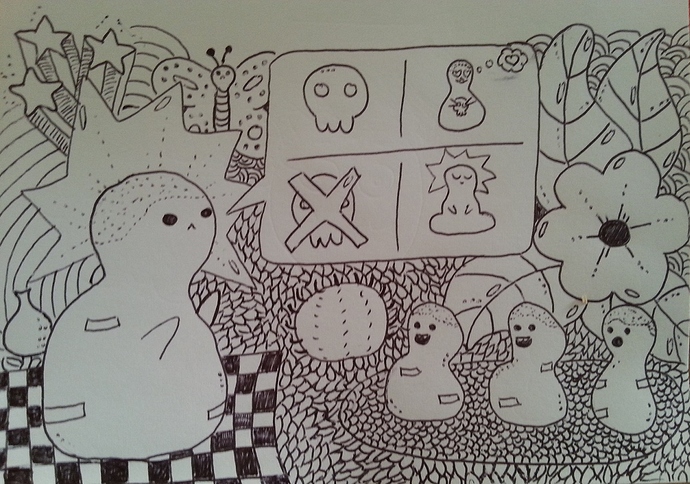 I’m thinking I will return to sketching . Thanks for the inspiration. It’s been years

These sketches are actually quite lovely, and harken back to a long tradition, both in the East through Buddhism and the West.

People have traditionally often been taught complicated teachings visually. I am thinking of medieval Europe, where literacy was not high. The churches would have sometimes very elaborate and fine artwork depicting the story of the life and passion of Jesus, which sometimes included some very abstract symbolism to communicate more abstract ideas.

A lot of this paintwork has not survived the ages, but particularly among the recently converted Northern European peoples, this tradition of pedagogy-by-artwork has a particularly personal flair. The word ‘church’ in Christianity does not refer to the building, but rather the Christian community. It comes from a word referring to the gathering of an assembly. Christian churches were thus works “of the people”. Local artists engaged. You can get a hint of the personal touch and style of this old artwork in some rare extant survivals, for instance this from Bjäresjö kyrka: 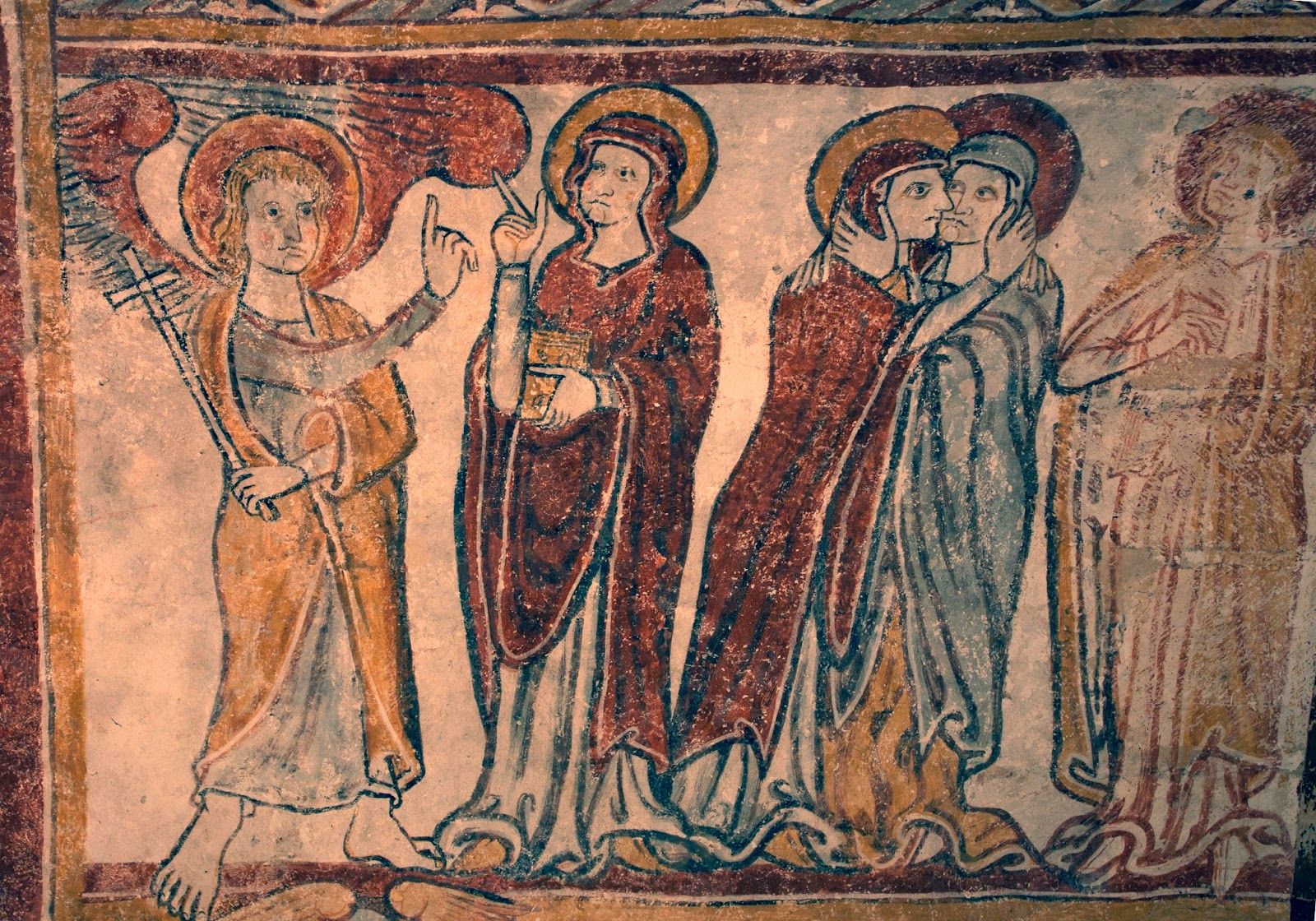 Perhaps we will one day see pictures in a similarly abstract style as Ven Yodha has provided adorning the walls of a centre for Dharma instruction. Teaching the laity as they walk in.

I’m thinking I will return to sketching

Drawing is great dhamma practise! Engaging the right hemisphere of your brain helps with developing metta. And you get much better at visualising meditation objects! 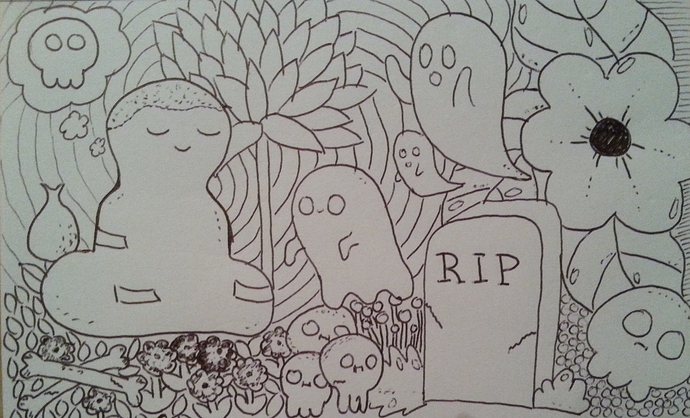 My initial comment, meant as humorous, was meant as a harmless comment on the contrast of the emoticon with the facial expression of the Venerable depicted.

However, one would not react that way to a male Venerable, in fact, the difference between the emoticon and the facial expression, and the ‘harmless amusing observation’, would not occur at all, or at least is unlikely to have occurred to me, if I self-reflect, I think.

It’s important to have depictions of women who are not always smiling, regardless of the mental state being depicted. No one notices when a man is not smiling, because perceiving a man as fulfilled or accomplished, mentally, does not necessarily involve him “smiling” to anyone.

Sorry if I have offended or introduced an off-topic tangent. My apologies. In many ways, I now appreciate the first doodle more because the nun is not overtly ‘smiling’.

Thanks for sharing your reflections!

However, one would not react that way to a male Venerable,

It’s important to have depictions of women who are not always smiling, regardless of the mental state being depicted.

Yes, I think that is very important, thanks for bringing it up.

By the way, when I made the drawing I didn’t think of it as a nun, just as a human being, and the file on my computer just says “on almsround”. But then I shared it with a nun friend in a PM and thought it was more relateable if I called it “nun on almsround”. And now discourse automatically changes the name and doesn’t let me upload the file with the original title… So that’s how it became a nun!

Discourse also didn’t let me post the title of the thread without the emoji (too short), so the whole thread is shaped more by technical necessity than my own intentions!

But on second thoughts, I like the idea of having more female monastics depicted in modern Buddhist art (and silly doodles

), so I don’t mind if my character becomes female. 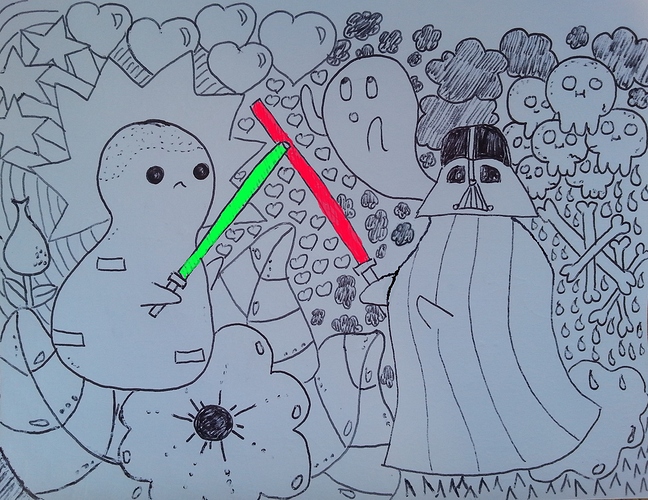 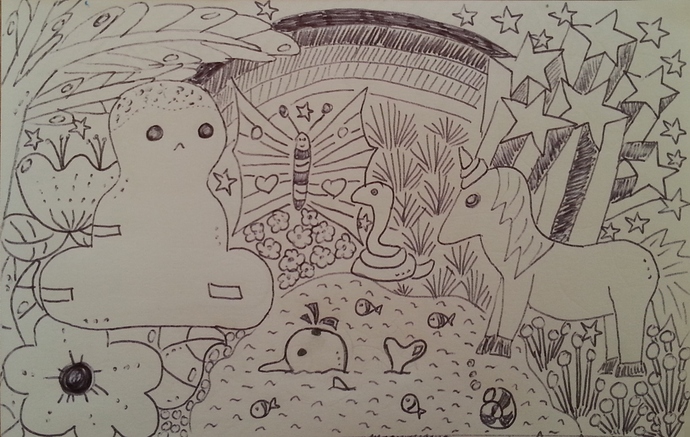 Because Dhamma practise is all about rainbows, dolphins, and unicorns! (irony off)

I used to have a nun-friend who made lots of Dhamma-Doodles about her life as a nun!

Oh, that is what nuns doing in their spare time!

There’s no spare time for nuns (and monks). Dhamma practise is a 24h job! 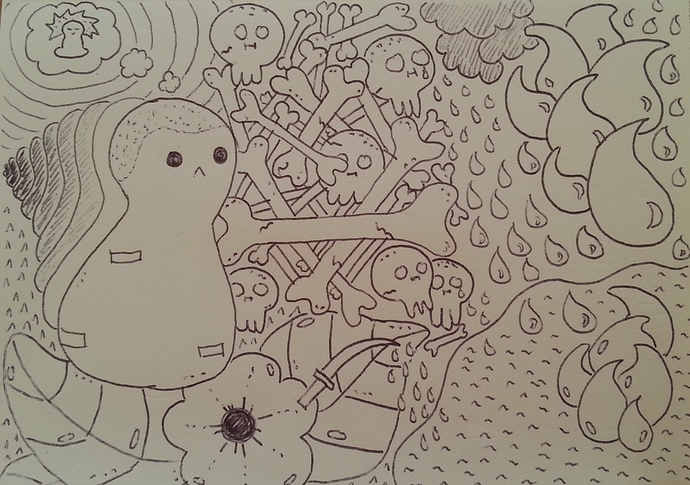 yodha your Dhamma doodles are great. Thanks for sharing them.

These are fun! Could be turned into a graphic novel or something.