I don’t think this article has been posted before. 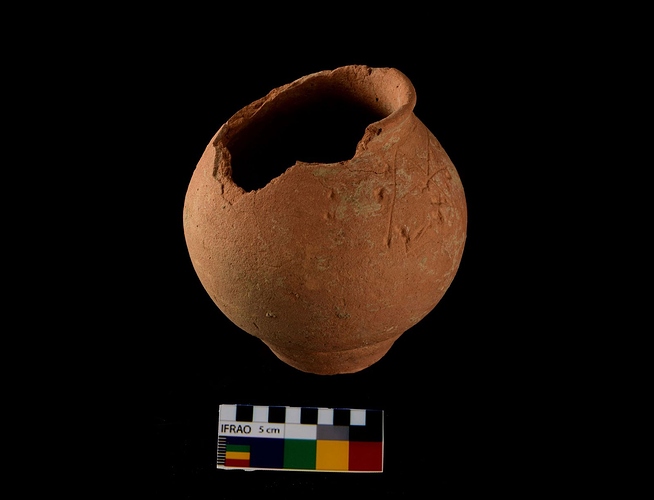 The Indus Valley Civilization flourished alongside Mesopotamia and Egypt, but the early society remains shrouded in mystery

Some of the key findings mentionned in the Smithsonian summary article:

“But Steppe pastoralist DNA is absent in the ancient Indus Valley individual, suggesting similarities between these nomadic herders and modern populations arose from migrations after the IVC’s decline”

“suggesting that farming spread through an exchange of ideas rather than a mass migration, or perhaps even arose independently in South Asia”.

The new finding contardicts previous findings such as the ones mentionned in this tread:

How ancient DNA may rewrite prehistory in India The Watercooler

The Smithsonian article comments on this contradiction:

The first evidence of agriculture comes from the Fertile Crescent, dating to as early as 9,500 B.C., and many archaeologists have long believed that the practice of growing crops was brought to South Asia from the Middle East by migrants. Earlier DNA studies seemed to bear out this idea, since South Asians today have significant Iranian ancestry.
[…]
If farming did spread from the Fertile Crescent to modern India, it likely spread via the exchange of ideas and knowledge—a cultural transfer rather than a significant migration of western Iranian farmers themselves. Alternatively, farming could have arisen independently in South Asia, as agricultural practices started to sprout up in many places across Eurasia during this time.

rice appeared, ripening in open spaces, without powder, without husk, pure, fragrant and clean grained. Where we plucked and took away for the evening meal every evening, there next morning it had grown ripe again. Where we plucked and took away for the morning meal, there in the evening it had grown ripe again. There was no break visible. Enjoying this rice, feeding on it, nourished by it, we have so continued a long long while. But from evil and immoral customs becoming manifest among us, powder has enveloped the clean grain, husk too has enveloped the clean grain, and where we have reaped is no re-growth; a break has come, and the rice-stubble stands in clumps. Come now, let us divide off the rice fields and set boundaries thereto!

Let me guess: next comes the debate as to if the DNA is Sanskrit or Dravidian.

Thanks for the interesting article (and the good presentation of it BTW!) 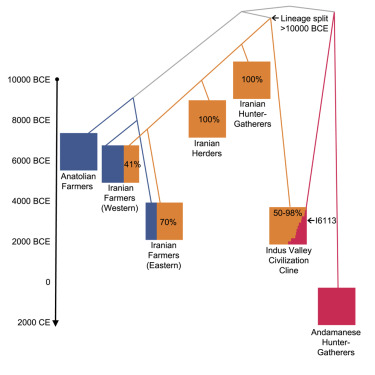 By which they mean the ancient Aryans.

The new finding contardicts previous findings such as the ones mentioned in this tread:

To be clear, if I understand correctly, the difference lies not in the earlier aboriginal immigration (the branches on the right in the diagram) nor in the later Aryan immigration, but the “middle” immigration from Iran.

The idea that agriculture was a culturally shared idea chimes with what we have learned from Aboriginal culture, which maintained long and complex trade routes across Australia. There’s no reason the ancient Indian hunter-gatherer societies should not have done the same, facilitating the exchange of ideas with Iran.

Indeed. The conversion to agriculture did not happen overnight, and it was still ongoing in the time of the Buddha—as it is, to a much lesser degree, today. Mythology maintains echoes of these ancient worries.

35 posts were split to a new topic: Pali / Sanskrit relationships to Semitic languages

The first evidence of agriculture comes from the Fertile Crescent, dating to as early as 9,500 B.C., and many archaeologists have long believed that the practice of growing crops was brought to South Asia from the Middle East by migrants.
If farming did spread from the Fertile Crescent to modern India, it likely spread via the exchange of ideas and knowledge —a cultural transfer rather than a significant migration of western Iranian farmers themselves. Alternatively, farming could have arisen independently in South Asia , as agricultural practices started to sprout up in many places across Eurasia during this time.

Note to moderators:
My post has been split to another location even though it expressed an opinion on this part of the OP.

“The Indus Valley Civilisation (IVC) was a Bronze Age civilisation in the northwestern regions of South Asia, lasting from 3300 BCE to 1300 BCE, and in its mature form from 2600 BCE to 1900 BCE.”—-Wikipedia

If ‘ages’ are taken to be 2000 years long (as in astrology), then an interesting fact emerges. The mature forms of the three recent ages, 4000-2000 and 2000-0 BCE and 1-2000 CE are all at about the 1500 year mark or 3/4 of the way through the age. This is probably connected to the golden mean, a perfect proportion which may have led to the Buddhist ‘middle way.’ For example the time of the Buddha coincides with the Greek golden age, about 500 BCE. Looking to the future, that means all the current world problems, such as the incompatibility of large populations with the natural world resulting in virus pandemics, and the rise of Buddhism, will be resolved about 3500 CE when everything will come into harmony.

The characteristics of the IVC age which was ruled by the element earth, meant that during that period all societies spontaneously developed organized agriculture, and also civic infrastructure. This imprint of an IVC seal shows the veneration of the bull (Taurus an earth sign) through the horned figure in meditation position. The cow remains sacred in India today, a heritage of the astrological age of Taurus 4000-2000 BCE, which encompassed the peak of the IVC. Incidentally the Buddha appeared towards the final stage of the age of Aries a fire sign (2000-O BCE), which accounts for the previous devotion and sacrificial rites to Agni the fire god, against which the Buddha’s teaching was disposed as the age declined. 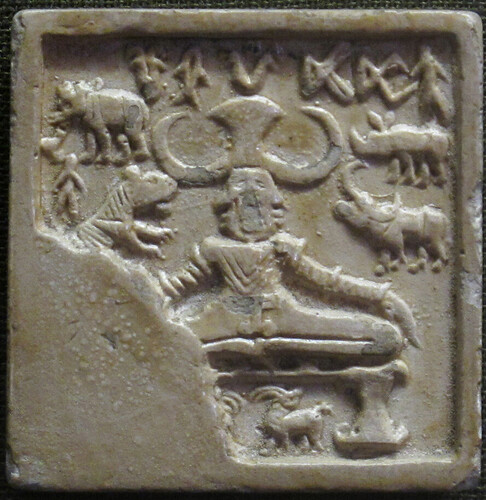 Sorry about that! I brought it back up here again.

I believe that the IVC (Indus Valley Civilization) realized and became aware of the Malthusian Trap of food scarcity. For example, there’s too many people and not enough food, so a civilization discovers new technology like farming, which boosts the amount of available food, but inevitably results in a population boom, which now uses up the new gains, and brings the civilization back to square one: not enough food.

Or for example, we cure cancer, which results in less deaths, and a population boom which now uses more resources, and now we have new problems that bring us back to square one.

You can see this in the Agganna sutta, beings continue to chase sensual desires from the beginning of the new universe cycle, as nothing will cure greed other than the noble eightfold path. No matter what invention a person makes, greed will use it up and the problem persists.

That’s why I think the Indus Valley Civilization perhaps died out because they realized the Malthusian trap and resorted to celibacy and meditation, instead of technological expansion and population growth. I read this article that when the Buddha was referring to “a lost path to an ancient city” he may have also referred to the IVC and not just the dhamma.

Pretty interesting article about the IVC and Buddhism: Fundamentals of Buddhism: Pre-Buddhist Background