How big was the Buddha's alms bowl?

In MN77 the Buddha says he sometimes eats more than one bowlful, full to the rim, of food.

Were the bowls a lot smaller then? More like the one that Bhante @Sujato carries, than the 7 inch bowl many monastics carry these days.

It is my belief that the larger bowls came about to help carry and store things while on ‘tudong’/wandering.

Is there archaeological or other evidence showing how bowls might have ‘grown’?

Just a random pondering I’ve had while eating my lunch

Were the bowls a lot smaller then?

Interesting.
I thought they all the same size.
I know some monks eat using a plate.
Some suggest it is a good strategy to use a small plate for serving if you want to lose weight.
I get annoyed when I go to a restaurant they give a big plate with tiny bit of food.

According to the vibhanga of monks’ NP 21, there are three allowable sizes: small, medium, and large. Everything smaller or bigger is not allowed.

Size. The Vibhaṅga contains a discussion of three proper sizes for a bowl—the medium size containing twice the volume of the small, and the large twice the volume of the medium—but they are based on measurements that are not known with any precision at present. The author of the Vinaya-mukha reports having experimented with various sizes of bowls based on a passage in the story of Meṇḍaka in the Dhammapada Commentary. His conclusion: A small bowl is just a little larger than a human skull, and a medium bowl approximately 27 1/2 English inches (70 cm.) in circumference, or about 8.75 inches (22.5 cm.) in diameter. He did not try making a large bowl. Any size larger than the large size or smaller than the small is inappropriate; any size between them falls under this rule.

Not sure how large a human skull is. Here in Sri Lanka, nuns often have small 5 or 6 inch bowls. Thai monks from forest traditions frequently have large 11 inch bowls. Like Ven Pasanna, I’ve also heard that this is so that all their belongings can fit in when they go on tudong.

@Pasanna considering your previous experience as a dietician (?) how would the average requirement in calories of a monastic, compare with bowl size!?

Thai monks from forest traditions frequently have large 11 inch bowls. Like Ven Pasanna, I’ve also heard that this is so that all their belongings can fit in when they go on tudong.

Indeed; in the old days they had no plastic, so the bowl was the only dry space they had. Sometimes the monks would end up spending a rainy night without any cover. Extra robes, books, papers and the like would be packed in the bowl. Ajahn Mun, according to legend, used to carry a copy of the Abhidhammatthasangha with him on tudong (don’t ask me where I got that from!).

It might be possible to learn something about bowl sizes from the remnants of Northern Black Polished Ware:

Study of early Buddhism is hampered by the paucity of archaeological remnants from the era. This is partly due to the nature of the culture at the time, with buildings mainly in wood, and monumental and brick architecture coming later; and also because of the generally poor state of archaeology in India. Nevertheless, we do have some evidence. the culture of the time is known as the Northern Black Polished Ware Culture, named after the distinctive shiny, glazed pottery (NBPW). The timing and geo…

What worries me is tiny plates with lots of food.

Not sure how large a human skull is

It’s when a mendicant preserves a meditation subject that’s a fine foundation of immersion: the perception of a skeleton, a worm-infested corpse, a livid corpse, a split open corpse, or a bloated corpse. --DN33

In the vinaya, skulls are not allowed on almsround. A monk tried that and people freaked out.

I just snapped this photo of two of the almsbowls from Baan Bat Village in Bangkok, the ancient center of almsbowl craftspeople. The bowl on the left is about skull sized; the one on the right might be the “middle” size. I believe that the craftspeople from Baan Bat handmake these bowls per ancient size templates and designs for the eight pieces of metal that are fused to make the bowls. 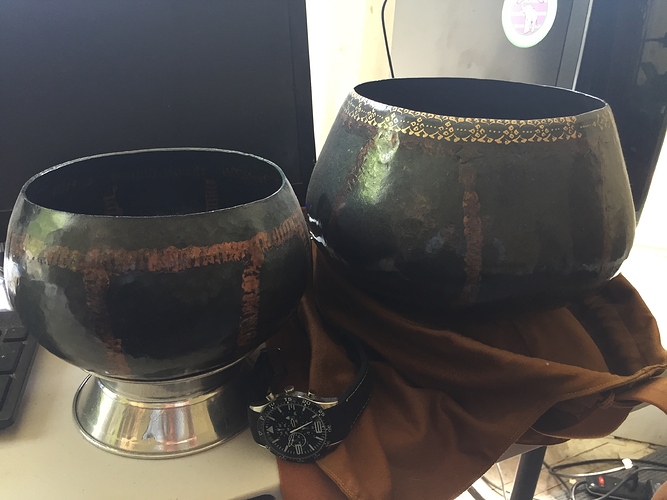 I know not to be attached to things, but if my house was burning down, I’d save my stupid dogs first, and then my almsbowls. 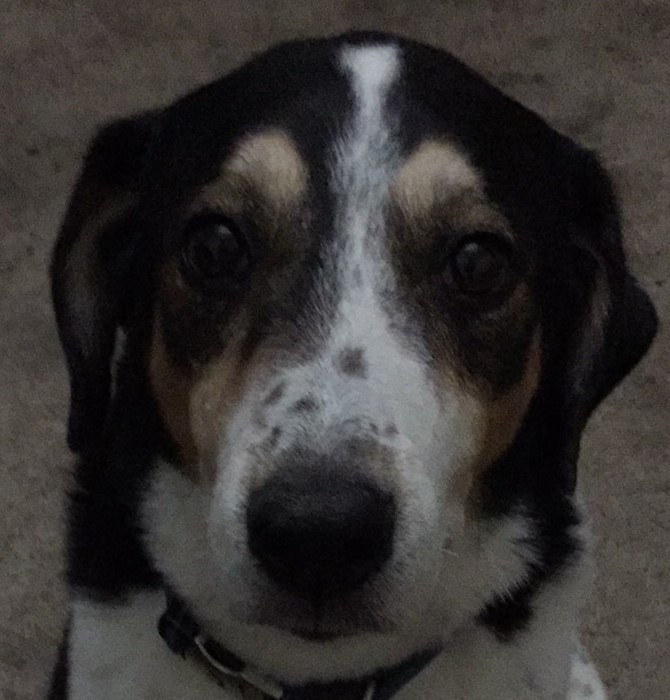 Are you a monk or this is one of your collections?

I was a temporary monk, and this is a permanent collection.

A small bowl still seems quite large to be eating more than one bowlful. I couldn’t fathom it unless it was all salad!

@Mat I’ve been eating out of my bowl for about 4 months and I still find it hard to gauge whether I’ve got the right amount. There certainly is the problem wanting to fill (the bottom) of the plate. And then you have to account for the fact that you don’t have dinner and the fact that we have so many lovely donors who offer food each day and I want to take something from each of them (not each dish but something).

In any case, we conclude that the Buddha, out of compassion, was able to eat a lot when required.

@Mat I’ve been eating out of my bowl for about 4 months and I still find it hard to gauge whether I’ve got the right amount. There certainly is the problem wanting to fill (the bottom) of the plate. And then you have to account for the fact that you don’t have dinner and the fact that we have so many lovely donors who offer food each day and I want to take something from each of them (not each dish but something).

In any case, we conclude that the Buddha, out of compassion, was able to eat a lot when required.

Yes, I would imagine if the bhikkhuni’s enjoyed the food it would enhance the donor’s kamma vipaka! But if it means putting up with I’ll health I don’t think that’s wise, assuming eating’s not driven by their craving. Self-sacrifice, or service isn’t a particular feature of qualities developed in monks and nuns. I think they’re Christian values!

I would probably die of starvation eating what my wife eats. I easily eat two to four times what she eats during the day. It is rather peculiar given that our respective sizes are not that disproportionate. Indeed, one of the continuing difficulties I have is consuming enough before noon to last the day. I can’t actually do that in one meal. I need about four skull bowls. Therefore the range of sizes of alms bowls makes a lot of sense to me.

One of the interesting things is that the human body is able to adapt, to a point, to a certain calorie range when that calorie range is slowly crept up. You can google ‘reverse dieting’. It works both ways, so a body can adapt to maintaining weight on a low calorie range and then gain weight when suddenly fed an excess of calories and I also know of people who have reverse dieted to eat far in excess of what their Resting Metabolic Rate should be calculated at. Our biggest eaters in the monastery are coincidentally some of the smallest people. There is only 1 person here who I think could eat a ‘skullful’ in one sitting. Luckily we also have breakfast here. This helps us get through our morning work period before lunch dana.

In Fa Xian’s (Fa-Hsien) travel records, you may find some detail on buddha’s alms bawl. Some of those stories about the bowl seems fiary.

It may contain rather more than two pecks, and is of various colours, black predominating, with the seams that show its fourfold composition distinctly marked. Its thickness is about the fifth of an inch, and it has a bright and glossy lustre.
Ref: Faxian (Fa-Hsien) On Buddhist Kingdoms
Note: According to Fa Xian’s obervation, this particular bowl might be the real bowl of the blessed one, since this has a fourfold composition.
The story says the Buddha got four bowls from four devas of catummaharajika, and soon after, those were fused together to make one bowl.
Note2: A peck is equivalent to 2 dry gallons. A dry gallon is equivalent to the volume of 8 pounds of wheat. In this way the bowl is too large to be believed as the Buddha’s bowl. However, the measures from Fa Xians time might vary from recent measures.