Mistake made in SuttaCentral translation of MN89

I just started reading MN89 Bhikkhu Sujato’s translation and as an Australian I was quite amused to find that Nangaraka has been wrongly translated to “Townsville” which is a town in Australia.

Here is the explanation…

Ha ha, I had no idea of the Powerpuff girls connection, but I like it! I sometimes translate Pali names, because it’s not uncommon that names lean more to the side of descriptive epithets in Pali. In this case, nagaraka means “little city” and I thought it was an odd name. So I wanted to translate it with something comparable. But why “Townsville” in particular? Well, as it happens, Townsville was the place where where the thought first occurred to me, “I should go to Thailand”, and that set m…

It’s up there with other quirky choices like Manuka Honey…

I don’t know Pali well but I’m doubtful that there is manuka honey in India as the manuka tree is only found in Australasia. What is the original Pali for this phrase ? “Whatever the Buddha teaches, we shall listen to it.” It’s like when there’s a person at the crossroads pressing out pure manuka honey, and a large crowd is poised on the edge of their seats. "

One of the joys of reading Bhante @sujato’s translations is discovering his interesting translation choices. Perhaps readers might like to share their discoveries… We’ve already heard about Manuka Honey: Manuka honey in MN 77? and the wordplay of: “It wears away, mendicant, that’s why it’s called ‘the world’. Please report any errors or typos! which attempts to reproduce the Pali wordplay. Here’s another one: Living with gods and zombies. “Householders, there are four ways of living toget…

Valuable information can be obtained from Nangaraka by studying the role of the war between Kosala and Magadha, bringing into context the political situation in which the Buddha’s life was lived out.

"From there Pasenadi, accompanied by Digha-Kārāyana, paid his last visit to the Buddha, as recorded in the Dhammacetiya Sutta (MN 89).

Pasenadi (c. 6th century BCE) was a Sun dynasty ruler of Kosala. Sāvatthī was his capital. He was a prominent Upāsaka (lay follower) of Gautama Buddha, and built many Buddhist monasteries for the Buddha.
Once, while he was away from his capital Savatthi, his minister Dīgha Karayana placed his son Viḍūḍabha on the throne. He went to Magadha to seek help from Ajātaśattu in order to regain his throne. But before being able to meet him, Pasenadi died of exposure outside the gates of Rājagaha.[5] He was succeeded by his son Vidudabha.

During the 5th century BCE, Kosala incorporated the territory of the Shakya clan, to which the Buddha belonged. According to the Buddhist text Anguttara Nikaya and the Jaina text, the Bhagavati Sutra , Kosala was one of the Solasa (sixteen) Mahajanapadas (powerful realms) in 6th to 5th centuries BCE,[7] and its cultural and political strength earned it the status of a great power. It was later weakened by a series of wars with the neighbouring kingdom of Magadha and, in the 5th century BCE, was finally absorbed by it." (Wikipedia) 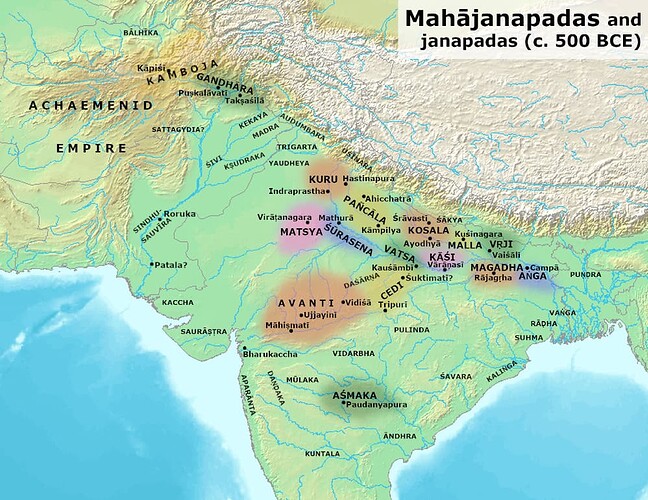