After however many times of just setting it aside, finally I can’t help but inquire: Bhante @sujato I’d be so interested and grateful if you could give a little explanation of the decision to go with “sabbath” in your translations. I have to admit it really sticks out to me; in such a way as to distract.

I imagine a large part of my curiosity around it is because in my mind “sabbath” is exclusively tied to the Judeo-Christian tradition and I think the only occasion I’ve come across it being used (semi-)outside of that context is in the term ‘digital sabbath’ (I consider it only semi-outside, because the Sabbath Manifesto is firmly rooted in the Jewish faith).

I think a main point of intrigue for me, though, is why the other (to my uneducated mind, more obvious) options of “observance day”, or “uposatha” were turned down; what were the problems associated with them?

One particular detail that I wonder over is with respect to the “uposatha” option. In the first sutta I read with the “sabbath” rendition, I was all, “oh well, it doesn’t quite work for me, but I remember Bhante wanted to make his translations as accessible as possible and maybe he feels that ‘sabbath’ will be more familiar to people unfamiliar with Buddhism.” That worked as an explanation right up until I got to a point in the same sutta where the word “Saṅgha” was used… alright, fair enough, “sangha” has made it into the Oxford Dictionary where “uposatha” hasn’t, but in ‘average-joe-land’, I imagine they’re both around about equally obscure.

Well, a sabbath is a sacred day of religious observance once a week, where certain extra vows or precepts are undertaken, and it is (more or less) a time of rest and contemplation. The concept is so similar to uposatha that it seems like the obvious translation. Yes, it has a strong Abrahamic connotation, so that’s a drawback. But “observance” is too vague, and uposatha is a non-translation.

Various third-party sources acknowledge the use of sabbath in derived contexts such as Buddhism:

The Uposatha has been observed since Gautama Buddha's time (500 BCE), and is still being kept today in Theravada Buddhist countries. It occurs every seven or eight days, in accordance with the four phases of the moon. Buddha taught that Uposatha is for "the cleansing of the defiled mind", resulting in inner calm and joy. On this day, disciples and monks intensify their practice, deepen their knowledge, and express communal commitment through millennia-old acts of lay-monastic reciprocity. Thai Ch...

So, from am etymological point of view there is a bit of a disjuncture to use an English word with a Semitic origin which would have no cognate in Indo-European languages such as Pali or Sanskrit.

Having said that, from a contemporary perspective, few readers of early Buddhist texts are going to be as language-obsessed as I am (has anyone noticed my username?

), so it’s probably just as well to use a word that resonates with modern English usage than to strive for a more etymologically “authentic” translation.

Thanks so much for this background, quite apart from the original question it’s absolutely fascinating in and of itself!

From a practical perspective, if you search google for “Buddhist sabbath” the first result is the wikipedia for uposatha. 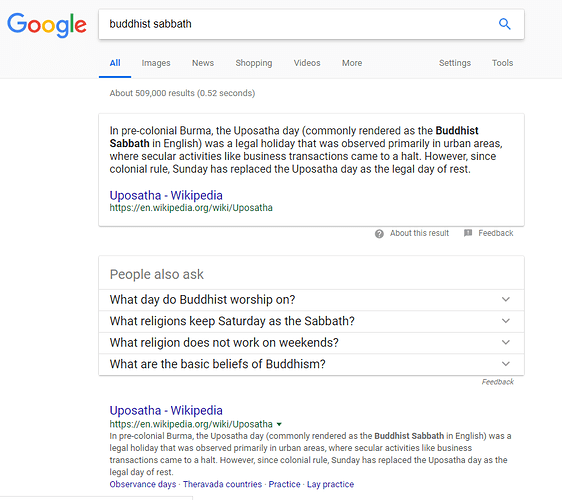 They say that on the Buddhists sabbath, the wicked Buddhists devour an entire Jain baby!

it has a strong Abrahamic connotation

which is why I also regularly stumble upon it. A sabbath is for jews not a sacred day but a jewish sacred day, and I don’t see why blending religions is helpful for conveying Buddhism. Food edible for monks is not ‘kosher’ and Vesak is not Christmas.

Also, more specifically שַׁבָּת refers in the bible to a day without food gathering activities, where slaves could rest, and when one is dedicated to prayer to the creator god.

Especially the theistic connotations strike me as odd in a Buddhist context.

From a practical perspective, if you search google for “Buddhist sabbath” the first result is the wikipedia for uposatha.

I think it’s a fair point, but at the same time, if you’re going to have to look something up, you might just as well look up “uposatha”. I figure the whole point of going with “sabbath” was so that your reading experience isn’t disrupted by confusion over what something means.

Have to admit, I’m not a massive fan of the word choice, but soothed my instincts against it by imagining it being said in the voice of Rev. Lovejoy from The Simpsons.

Even more jarringly perhaps, I have seen uposātha translated rather prominently as “communion”!

Also, more specifically שַׁבָּת refers in the bible to a day without food gathering activities, where slaves could rest, and when one is dedicated to prayer to the creator god.

But if witches get them, then surely Buddhists can have some too?

The etymology is actually solid. A “sabbath” can refer to a meeting (I alluded to this in my previous post), but in the context of the medieval folktale of the witch’s sabbath.

The colloquialism works, what it means is immediately understood, but it technically could be comparing the meeting of monks with the gathering of witches!

It’s a good thing Christians also have a sabbath, instead of only Jews and witches (!), and that this can have a more general meaning of a gathering for religious activity. This meaning and sense of “sabbath” is culturally enracinated in many places.

All jokery aside, I am sure everyone will have their opinion on which cultural adaptions, linguistically, are acceptable and which are not. If a writer does not want a reader to have to memorize too much Pāli, a “Sabbath” is a quick and easy word for a holy day that is not a new word, but can be assigned a new meaning in the context.

“Communion” might actually be a better term for uposātha IMO, but that is related moreso to its etymology and literal meaning, and certainly seeing that pop up in your scriptures would be quite odd for some it seems!

+1 for it sounds super weird and distracting. As a former christian, it brings more inaccurate connotations than accurate ones. “Holy day” would be less loaded to my ears, though also not a good solution.

I’d rather let uposatha be like sangha and have it’s nuances encompassed by the use of the original word. Otherwise why not translate sangha as “congregation”? To me, it’s the same type of translation to judeo-christian terminology, and both are more distracting than they’re worth.

Not the end of the world either way, and it’s your call, but for me, versions without any words that summon the spectre of Yahweh are more likely to entice people who have been forced to participate in judeo-christian theology.

…commonly rendered as the Buddhist Sabbath in English….

So rendered by condescending non-Buddhist colonialists, showing their broad-mindedness by willingness to acknowledge that Buddhism may actually be a religion – see, it has a Sabbath!

I was not raised Christian or Jewish, and am not charmed by being patronized by adherents of either.

Is Western Buddhism next to adopt the tender ritual of infant circumcision to establish its “religious” bona fides, as have certain Judaizing Protestant Christian sects?

I like to wrestle with the original terms if translations don’t quite work, so uposatha works for me once I know what it signifies within a Buddhist context. Another example is jhana. Obviously, without the work of skilled translators for the past century and a half or more we would have no access to EBTs at all. But there are some words that seem to defy the process.

there are some words that seem to defy the process.

I don’t necessarily think of it as defying the process, or at least I recognise another way of seeing it: an initially unfamiliar word eventually becomes familiar and absorbed into the broader word pool. As mentioned above ‘sangha’ is now a bona fide ‘English’ word, that is it has officially become part of the English language. I’ll leave it to perhaps someone of Metaphor’s calibre to inform us how many once foreign words are now part of the English lexicon.

I’ll leave it to perhaps someone of Metaphor’s calibre to inform us how many once foreign words are now part of the English lexicon.

The vast number of words in English is borne out by the many synonyms that exist for any one concept, in part because a concept in English can be expressed through a variety of linguistic influences from contributing idioms. Thus there may be an English word with Latin roots and a synonym with Germanic origins, a phenomenon not typically found in languages with fewer foreign sources, although I read recently that Tamil has quite a lot of synonyms for certain concepts and there are some words in Tamil that have no English equivalent.

Contemporary English is very good at absorbing words with no alterations. My favorite is “schadenfreude,” a German word that has no English counterpart and therefore has been adopted in English as is (i.e., with no effort to Anglicize it). I suppose the same could eventually occur with “uposatha,” just as it has with “sangha.”

and with sangha there is kamma, or karma as it seems most often to be rendered, and there will be others that enter our language as Buddhism takes further and deeper roots here and in other western societies. We are at an exciting period in this process of Buddhism’s flowering and our language will be enriched by the process.

Wow, @Metaphor! I stand in awe of your tremendous knowledge of linguistics!

As for the topic at hand, while I prefer to use uposatha when amongst my fellow Buddhists, (which, currently, is not many at all) I can understand the utility of the term sabbath as the US is overwhelmingly Christian, and our allows one to refer to their practice in terms understandable to the common folk. That would then, theoretically at least, avoid some unnecessary explanation of my faith to those who might see an opportunity to proselytize, something that I’ve endured on many occasions after expressing my lack of faith in the Abrahamic gods.