I found some translated Sutras and materials from this site ,http://www.persianbuddhism.com/
SC can contact them …
And kindly ask for permission

I am in contact with somebody who is translating various texts into Persian. He has finished translating the Tikipattana sutta and it is currently being proofread. There has also been talk about organising a group of people to do more translations.
I’m not entirely sure but I think they are related to this website. I will ask them.

I have been in contact with the owners of the site. They tell me that there is a translation of DN31 in Persian on their website but it is only partial. @Sujato … I don’t think we add partial texts to SC. What do you think.

Up to you. Normally not, but in this case if it’s not hard it may be worth it.

Not to hard with Notepad++ because Sublime does not do rtl text. But there is a plugin I can try.

Yes, generally Sublime is hopeless with complex scripts. Atom works well, have you tried that? It still struggles with large files, but for a single sutta it should be fine.

I don’t seem to find out how to stop Atom from not mirroring all the text (so the result is a mirror image of the original text). Sublime has the same problem. Maybe if you actually type the text character by character it would work. Easier to wait until I have a W10 computer with Notepad++.

I haven’t really looked at this area before, so this is interesting. It’s useful to know, as sometimes we have to work with these texts, or else recommend or suggest tools for people. For myself I’d like find something that will work well across OSs, which rules out Notepad++.

A quick check shows that Sublime is the worst, it reverses the text. Did you try this plugin?

Despite what you said above, for me Sublime and Atom don’t do the same thing. What I see in Atom is text displayed in the correct direction, but left-aligned. Most editors I have tested do the same thing: Brackets, Visual Studio Code, Geany, and Light Table.

Gedit is the only editor I’ve tried that has text both in the correct direction and right aligned. 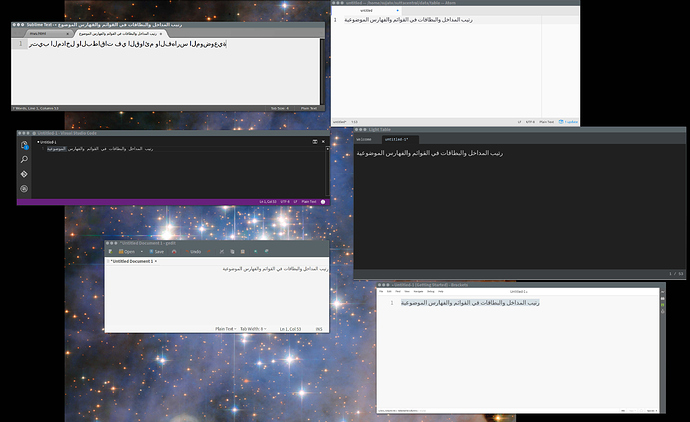 You can see the text is the same direction in all of them except Sublime.

From the user comments here it seems Brackets and Visual Code Studio are regarded as having good RTL support.

Sorry Bhante, I have not had much time to look at anything in detail, nor try the plugin. I tried Atom for half an hour but could not get it to work (it shows text reversed) but I also have no time to spend more time on this right now. I also get another text in Persian in at some point but that might still take a few months also.

It may work if you enable Persian keyboard for your PC.
( Unicode )

I started looking into this problem. Installed the plugin, which works fine and it looks good in Sublime, but once I make it into an html - it either reverses the letters or the words (with of course the right markup dir="rtl" In the below screenshot the big red text is the original correct text in pdf, the other two are made in sublime, atom, brackets and gedit. The only way I could get it right is to copy the text word for word, which I have no intention to do with the whole text!
All other editors (other than Sublime) actually display the text the wrong way around in the editor as well so no idea how you managed to copy the text from the pdf into the editors without it reversing.
I have just copied the header here just to try and it reverses the words also: ‫وادا‬ ‫سيگالو‬

If I copy the whole lot into Libreoffice and then export as pdf and copy it again in Sublime, shorter sentences seem to work, but still problems with longer sentences.

no idea how you managed to copy the text from the pdf into the editors without it reversing.

Actually, I didn’t. I just grabbed a bit of random Arabic from the web. Perhaps this is the issue, maybe there’s something in the PDF encoding that stuffs up the alignment. Maybe try using some text from some other source. If that works okay, then it looks like we need to find a source other than the PDF.

In any case I will be back near a Windows machine in a few weeks so I know with Notepad++ it works OK.

Can you upload the pdf for me? Let me try it on this end.

I just tried it with a pdf downloaded from the file on the site, and can confirm that Gedit reverses the order of this, but not of some random text from the web. So it seems there’s an issue with the source somehow. If it works with Notepad++, perhaps it is a Microsoft bug (analogous with the line end bug that cropped up here a few days ago). My concern would be even if it works inside Notepad++, will the resulting file work?

Perhaps we need the sources files.

i’ve had such experience with Hebrew

I had the same problem before with the dn22 in Farsi but that worked in Notepad++. Will see when I get back.

if the Word isn’t installed the resulting file can be further processed with Google Docs, wherefrom the text can be accurately transferred to an offline text processor

I tried that but it keeps the same problem as I previously had when copying it to Sublime or any other text editor.