The Nidānakathā, or Introduction to the Jātaka Stories published on Ancient-Buddhist-Texts.net: Why you should read it

Recently Bhante Ānandajoti re-published T. W. Rhys Davids translation of the commentarial introduction to the Jātakatthavaṇṇanā. You can read it on line or download it as a pdf or ebook.

What it is: This is the introduction found in the the commentary to the Jatakas. So a translation from Pāli in to English.

Why you should read it: If you only read the Suttas and the Vinaya, you may be puzzled as to where all the other stories are from the life of the Buddha and Bodhisatta. Well, here they are. At least a whole lot of them! People who grew up with a traditional Buddhist religious education will know these stories by heart. Now you no longer need to feel left out.

It is divided into three sections. I have listed off many of the famous events it recounts and interesting features it contains. Where the material overlaps with things that can also be found in the suttas or vinaya, I may not have listed them. This part is about 127 A4 pages.

The Proximate or Last Epoch

Thank you so much. I wouldn’t have expected to find this in Jātaka commentary.

As a side note, the other thing about this which is kind of interesting is that the Jātakatthavaṇṇanā seems to have been written at the request of monks of other (non-Mahāvihāra) sects:

And I do so at the personal request of the elder Atthadassin, who lives apart from the world and ever dwells with his fraternity, and who desires the perpetuation of this chronicle of Buddha; and likewise of Buddhamitta the tranquil and wise, sprung from the race of Mahiṁsāsaka, skilled in the canons of interpretation; and moreover of the monk Buddhadeva of clear intellect.

That’s a very interesting observation. i wonder why?

In the Mahamakut Thai translation of the Atthakathās these lines have been curiously omitted, though they are not absent from the Thai Pali edition.

The more recent translation by the Bhūmibalo Bhikkhu Foundation doesn’t omit them and agrees with Rhys Davids in taking mahiṃsāsaka to be the nikāya of this name.

It occurs to me, however, that they may be mistaken in doing so and that it might be that the word is being used as a common rather than a proper noun:

mahiṃsāsakavaṃsamhi sambhūta.
“One arisen in the lineage of great teachers.”

If (as Malalasekera thinks) it’s the same Buddhamitta who requested Buddhaghosa to translate the Majjhima-atthakathā, then it seems unlikely that he was of the Mahīmsāsaka school, for in the commentary’s colophon, not only is he presented as an erstwhile colleague of Buddhaghosa at Mayūradūtapaṭṭana, but also the stated reason for the MA’s composition is paravāda-vidhaṃsanaṃ, “the destruction of other [i.e., non-Theravāda] schools of interpretation.”

Then the five attendant mendicants thought, “This man has not been able, even by six years’ penance, to attain Omniscience; how can he do so now, when he goes begging through the villages, and takes material food? He is altogether lost in the Struggle. To think of getting spiritual advantage from him is like a man, who wants to bathe his head, thinking of using a dew-drop. What is to be got from him?” And leaving the Great Being, they took each his robes and begging bowl, and went eighteen leagues away, and entered Isipatana (a suburb of Benāres, famous for its schools of learning).

One of the ways the commentaries seem to embellish things is through similes like this one.

Sean Gaffney of SOAS has kindly made available his translation of the Tibetan Jātakanidāna, which may or may not be from the Pali, though Gaffney thinks it’s likely to be.

It’s in two volumes, the first being a critical edition of the Tibetan text and the second the translation.

Venerable, have you had a chance to take a look at it at all? Curious to get your impression. 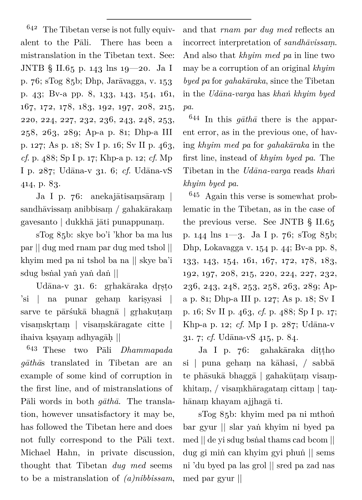 This Jataka-Nidanakatha should be read along with other Buddhist texts from the same genre like Mahavastu-Avadana of Lokottaravadin, etc. for comparative study, I think…

Venerable, have you had a chance to take a look at it at all?

No, not yet. It’s only just been brought to my attention and it will likely be a few weeks before I get around to it. I’m presently working through Kristin Scheible’s Reading the Mahāvaṃsa: the Literary Aims of a Theravāda Buddhist History. It’s a most delightful study of the chronicle and the first one I’ve ever seen that actually takes seriously the author’s stated purpose in writing it: sujanappasāda-saṃvegatthāya. 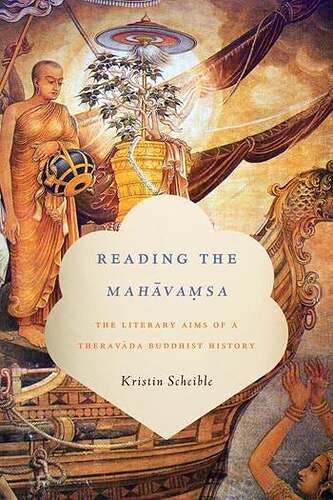 Vamsa is a dynamic genre of Buddhist history filled with otherworldly characters and the exploits of real-life heroes. These narratives collapse the temporal... | CUP

Vamsa is a dynamic genre of Buddhist history filled with otherworldly characters and the exploits of real-life heroes. These narratives collapse the temporal distance between Buddha and the reader, building an emotionally resonant connection with an outsized religious figure and a longed-for past. The fifth-century Pali text Mahavamsa is a particularly effective example, using metaphor and other rhetorical devices to ethically transform readers, to stimulate and then to calm them.

Reading the Mahavamsa advocates a new, literary approach to this text by revealing its embedded reading advice (to experience samvega and pasada) and affective work of metaphors (the Buddha’s dharma as light) and salient characters (nagas). Kristin Scheible argues that the Mahavamsa requires a particular kind of reading. In the text’s proem, special instructions draw readers to the metaphor of light and the nagas, or salient snake-beings, of the first chapter. Nagas are both model worshippers and unworthy hoarders of Buddha’s relics. As nonhuman agents, they challenge political and historicist readings of the text. Scheible sees these slippery characters and the narrative’s potent and playful metaphors as techniques for refocusing the reader’s attention on the text’s emotional aims.

from the race of Mahiṁsāsaka

I assume this is the same as the Mahīśāsaka

Most likely the Sri Lankan branch which was later absorbed into Theravada (as per Warder)?

Side note: they wore blue robes?? Now that is cool. Someone should bring it back. Wonder what they used for dye.

Wonder what they used for dye.

It’s also interesting that in the early 5th century, Faxian was able to get a copy of the Mahisasaka Vinaya at the Abhayagiri Vihara in Sri Lanka.

He was also able to find copies of the Samyukta Agama and the Dirgha Agama while in Sri Lanka. I’m not sure if those were from Theravada, Mahisasaka, or some other group, though (?).