Towards a better understanding of reality: Physics Nobel Prize winners of 2022

The Physics Nobel Prize this year has been awarded to three people who investigated some of the deepest aspects about the nature of reality, specifically whether in Nature at the same time:

The answer that experiments have shown us is that this is not the case.

The following article explains very clearly the background and the significance of this year’s award. 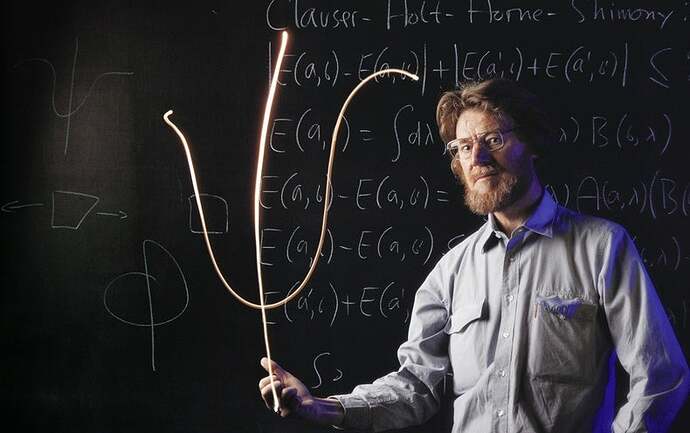 The Universe Is Not Locally Real, and the Physics Nobel Prize Winners Proved It

“It is wrong to think that the task of physics is to find out how Nature is. Physics concerns what we can say about Nature” - Niels Bohr

“All that physics gives us is certain equations giving abstract properties of their changes. But as to what it is that changes, and what it changes from and to—as to this, physics is silent.” (Russell 1959: 18)

Thanks for keeping us grounded into reality.

Indeed, I completely agree that Physics is a description of how Nature behaves. In my understanding, Physics does not even try to answer questions like “what is an electron”. Instead, in this example, it tries to describe what happens when an electron interacts with another particle.

The first quote reminds us about the descriptive part, i.e. we are talking about a (sometimes extremely accurate) map, not about the territory.

The second quote is about the fact that quite often question are out of the scope of Physics and the most honest answer about that is: “I don’t know”.

I like this article of by Aspect (who’s a great guy with a great accent and a killer moustache) from a couple of decades ago:

His quote from Feynman is very apt:

Whether non-separability of EPR pairs is a real problem or not is a difficult question to settle. As Richard Feynman once said: “It has not yet become obvious to me that there is no real problem. … I have entertained myself always by squeezing the difficulty of quantum mechanics into a smaller and smaller place, so as to get more and more worried about this particular item. It seems almost ridiculous that you can squeeze it to a numerical question that one thing is bigger than another. But there you are — it is bigger." Yes, it is bigger by 30 standard deviations.

Certainly, I agree physics is about making predictions about nature, and I caution my students against over interpreting such mathematical tools as wavefunctions, etc, as being “real”. However, it’s important to ask these questions, as they may well lead to a breakthrough such as Bell’s work. Bell showed that Einstein was wrong in his guess that one could define a locally realisitic theory if one worked hard enough at it. It turns out that you can’t. This is important, and it renders many of the arguments and quotes from the 1930s irrelevant.

That paper of Feynman from the early 80s that Aspect quoted is often seen as the genesis of quantum information/computing - the transition from “isn’t quantum mechanics weird?” to “what can we do with this weirdness?”.

To get some idea of this for the visually inclined there is a fantastic video by minutephusics and 3blue1brown about the inequality using polarised filters:

Indeed it is stranger than we imagine. While much of the physics, and QM remain a challenge for my limited cognition, and perhaps because of my limited comprehension I prefer the mystery to the analysis.

In that case @Rosie this one’s for you:

Oh my, how lovely! I am not much of a folkie. More of a Rush fan [not Buddhist at all] but she has a delightful voice and I dug the message, of course.
Thanks, with Metta back!

Thanks, @josephzizys
I quite like that video. Now I’m going to try the second video with the math.

Local Reality and the CHSH Inequality

A university quantum algorithms/computation course supplement based on Qiskit

i.e. The map is not the territory

All we can know is abstractions (papanca).

Can we ever truly know the territory? Pyrrho, the founder of skepticism influenced by early buddhism, would probably say “No”, and understanding that you could never truly know things, thus preventing one from becoming a dogmatic fanatic, one instead attains true equanimity resulting in “eudaimonia” (happinees) and “ataraxia” (serene calmness).

Instead of chasing and obsessing over abstractions, one puts an end to them.

Whoever wants to live well (eudaimonia) must consider these three questions: First, how are pragmata (ethical matters, affairs, topics) by nature? Secondly, what attitude should we adopt towards them? Thirdly, what will be the outcome for those who have this attitude?" Pyrrho’s answer is that "As for pragmata they are all adiaphora (undifferentiated by a logical differentia), astathmēta (unstable, unbalanced, not measurable), and anepikrita (unjudged, unfixed, undecidable). Therefore, neither our sense-perceptions nor our doxai (views, theories, beliefs) tell us the truth or lie; so we certainly should not rely on them. Rather, we should be adoxastoi (without views), aklineis (uninclined toward this side or that), and akradantoi (unwavering in our refusal to choose), saying about every single one that it no more is than it is not or it both is and is not or it neither is nor is not.[14]

Pyrrho, the founder of skepticism influenced by early buddhism, would probably say “No”

Actually came to it from this TV show:

The Leftovers is an American supernatural drama television series created by Damon Lindelof and Tom Perrotta, that aired on HBO from June 29, 2014, to June 4, 2017. Based on Perrotta's 2011 novel of the same name, the series begins three years after the "Sudden Departure", a global event that resulted in 2% of the world's population disappearing. The lives of police chief Kevin Garvey (Justin Theroux) and his family, along with grieving widow Nora Durst (Carrie Coon) and her brother, Revere Th...

Which I HIGHLY recommend if your interested in the sociology of religions.

Wow, thanks for posting, and also your 3 dot point summary. Who has maintained a practice in both physics and dhamma to a high enough level to comment

? This is a philosophy or “view” it maybe easier for dhamma practitioners to feel combfortable with from first hand experiences than others. I wonder who can say if this physics is telling us what I think it is based on this article - that views are causal and conditioned and “nama” is never without “rupa” ?

I remember The Leftovers. One reviewer called it an obscure masterpiece

As I understand it, and, as always, I know my understanding to be limited, nama and rupa arise together mutually supportive like two sheaves of wheat or bundles of sticks. Karunadasa’s eminently readable Early Buddhist Teachings explores this and conditionality quite well

As I understand the result is even wilder than that, perhaps more like “Rupa is never without nama”.

This means that you can either keep locality, that is the idea that things very far apart can’t be mysteriously connected in some instantaneous way so that if I point my electron down then your electron in an entirely different galaxy instantly points up OR you can keep realism, that is that the particle is definitely spinning some definite way even before you look at it. But you can’t keep BOTH locality AND realism given that QM violates the Bell inequality.

Just to drive it home (again, as I understand it) EITHER things in the universe can instantaneously influence each other faster than the speed of light across arbitrary distances, in fact instantaneously, OR the most fundamental building blocks of reality only take on definite (“realistic”) properties when we choose to measure those properties and don’t have them before that.

Either of these things implies the universe is vastly more wacky than we are accustomed to acknowledging.

tldr quantum mechanics’ answer to the zen koan “if a tree falls in a forest and there is no one to hear it, does it make a sound” is an emphatic NO*

*unless we allow the tree to be entangled with other systems over arbitrary distances instantaneously.

I find a lot of this quantum stuff fun and interesting and weird, but it’s well outside of my areas of expertise!

I suppose the main thrust of her argument is that Bell isn’t enough to rule out such theories without the assumption of another type of “statistical independence” property, which has also been dubbed the “free will assumption” by some. Sabine is not really buying the necessity for this assumption or that the mathematical assumption necessarily has something to do with free will (she personally seems to think that the concept of free will is a load of nonsense).

She actually talks how it might be possible to experimentally test whether QM with “spooky action at a distance” or such superdeterministic hidden variable theories hold (though doesn’t believe Bell itself is enough to pick a winner between them).

She has a great talent for making some of these technical concepts somewhat more understandable to the layman!