Bhante Sujato has explained on several occasions that one of the principles he uses for translation is one he learned from Ajahn Brahmali: Our source texts do have a meaning! Even if the translator does not fully understand it, they should translate according to what they think is the most likely meaning, even if later on this turns out to be wrong. Giving the reader a potentially wrong meaning is always better than giving some vague translation that doesn’t make sense.

One of the rare examples where I don’t really see this principle applied is in Thig 2.3. Or at least, I wasn’t able to decipher the meaning.

Sā rukkhamūlamupagamma,
Having gone to the root of a tree,

My problem is mostly about these two lines:

My pestle’s shameless wind was wafting;
my little pot wafted like an eel.

I really can’t imagine how it would look like if a pestle’s shameless wind is wafting, nor do I see a pot wafting like an eel. What does it mean?

Ven. Thanissaro has a totally different take on it:

So freed! So freed!
So thoroughly freed am I —
from my pestle,
my shameless husband
& his sun-shade making,
my moldy old pot
with its water-snake smell.

Aversion & passion
I cut with a chop.
Having come to the foot of a tree,
I meditate, absorbed in the bliss:
“What bliss!”

So well freed, I am free now,
free from the pestle!
The shameless one doesn’t entice me into the shade any longer,
my pot of rice has now become empty.

(Leaving out the second verse because the most relevant here is the first one.)

Looking at these three translations, they could hardly be more different.

Bhante @sujato, it would be helpful if you could explain your translation choice. Thank you!

Ummmm…
This might just be my imagination, but the mortar and pestle imagery (along with the smells) seems highly suggestive of the home life/ woman’s duties/ reproductive organs/ fertility… perhaps a proto shiva lingam reference?

What word is translated as “pestle” here?

What word is translated as “pestle” here?

Go one line up: musalassa

There are two types of thought, word thought and visualization. Word thought is the commonly experienced ‘inner dialogue,’ while visualization is when pictures are formed in the mind.

Imagery is language used by poets, novelists and other writers to create images in the mind of the reader. Imagery includes figurative and metaphorical language to improve the reader’s experience through their senses.
It is also used to communicate subjects which cannot be expressed in words such as the higher states in Buddhism, or on the other hand are indelicate.

I’m going to comment on this in detail, but I’m looking for a couple of resources, if anyone has them to hand:

the translation by Hallisey (and notes if he made any.)

Here they are Bhante. 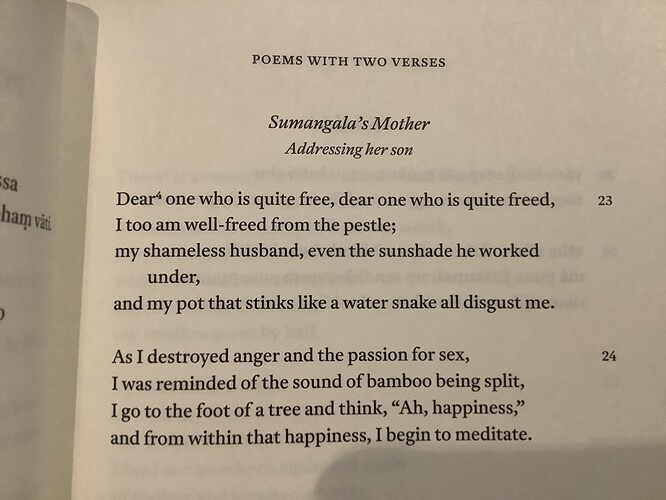 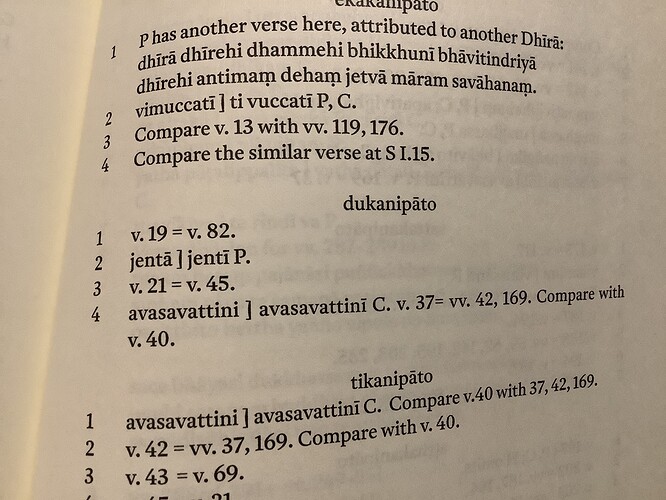 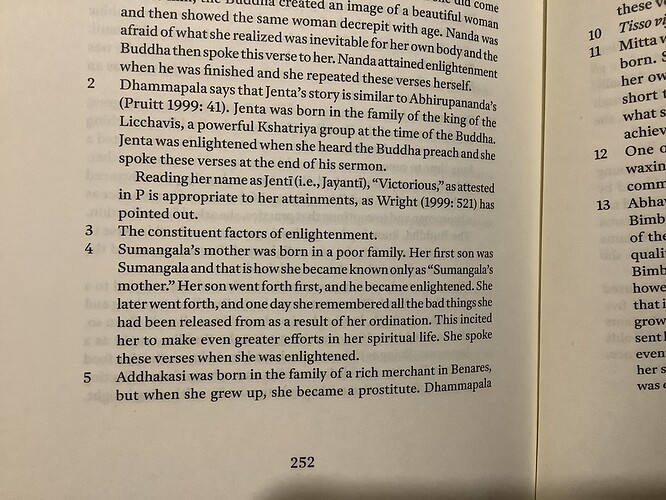 I pm’d you the introductory notes on the translations as well, in case it could be helpful

Thanks @ficus and @snowbird for help with materials!

Alright, here we go! I translated this verse many years ago, and I didn’t make any notes as to my thought process, alas. So this is a good chance for me to go back over it and reassess.

The second couplet is a specially tricky one, as evidenced by the range of translations. This uncertainty extends as far back as the commentary, which offers a range of opinions.

I believe it is playing with innuendos, and thus hinting or winking at meanings that we can only guess. I think it’s quite likely that these were allusions that women of the time would have got, but which were designed to sneak under the radar of the menfolk, including quite possibly the monks who were gatekeepers of the texts. This is pure supposition, of course, but it’s a recurring theme in women’s literature.

In addition, several of the words have multiple possible readings or meanings. And most important of all, there is no obvious way to resolve the issues. Normally in a sentence, the sense of an uncertain word is clarified by its context. Here that is not the case.

I’ll begin by discussing each of the terms and their possible readings.

Now let’s look more closely at the commentary. This is a very quick and probably wrong rendering, may those of better Pali correct me!

Now are you still with me? Safe to say, no translation is very sure, and likely any translation will omit something and maybe miss the point entirely.

If you look for it, phallic or sexual imagery is everywhere here: the mortar and pestle, the snake and eel, the mushroom. I assume double-meanings are meant throughout.

There are a couple of details from the Vinaya that give us some background as to the beliefs about genitals that were prevalent in the day. According to the Vinaya (pli-tv-bu-vb-pj1:10.21.7) one of the causes of erections is wind. This could apply to the images of parasol being blown open or a mushroom sprouting. The Vinaya also has Mahapajapati complain about women’s genital odors, occasioning a rule about washing (Pacittiya 5).

Looking at the lines afresh, I am struck by the parallelism in the second couplet. Let’s assume that is the poetic intent.

Here’s a revised translation, but it is very much a sketch.

I’m well freed, well freed,
so very well-freed from the pestle!
My disgusting husband blew up like a mushroom,
my mortar blew like an eel.

Thank you for your detailed comment, Bhante, and everybody else too for resources and comments. So it seems we are all in good company if we find these verses difficult to translate. I am not sure yet what I will come up with, but it will be something.

If you look for it, phallic or sexual imagery is everywhere here: the mortar and pestle, the snake and eel, the mushroom. I assume double-meanings are meant throughout.

I’m totally unqualified to speak to this, but here’s my two cents. I get a very strong, “I’m glad I’m free of my husband’s oppressive sexuality” vibe. I wonder if the parasol image is something like the modern “tent pole” euphemism. Or if the “shade” reference is something similar to “lie back and think of England”? The smelly pot might be an asubha reference? So she’s saying she’s free of dealing with her husband’s sexuality, and free from dealing with her own because she’s seen the body as asubha?

The commentary explains that she didn’t like the fact that he made his living by making parasols, which seems a little small-minded.

I still found my old copy of Neumann’s translation which obviously escaped the clearing up when I gave up my old dwelling (most other books didn’t).

He seems to rely on this explanation of the commentary when he interprets her husband to make money selling her to other men. That’s not quite “living by making parasols”, but you could say “making ‘parasols’ his livelihood”, if that is a metaphor for genitals.

I’d find it understandable that she didn’t like that.

I get a very strong, “I’m glad I’m free of my husband’s oppressive sexuality” vibe.

Hmm, it makes sense as a story, but I can’t discern that in the commentary.

The point of the OP quote is a contrast between a gross form of pleasure and a refined one, as explained in these two suttas:

"Both now & before is it painful to the touch, very hot & scorching, master Gotama. It’s just that when the man was a leper covered with sores and infections, devoured by worms, picking the scabs off the openings of his wounds with his nails, his faculties were impaired, which was why, even though the fire was actually painful to the touch, he had the skewed perception of ‘pleasant.’”—MN 75

"Now, if someone were to say: ‘This is the highest pleasure and joy that can be experienced,’ I would not concede that. And why not? Because there is another kind of pleasure which surpasses that pleasure and is more sublime. And what is this pleasure? Here, quite secluded from sensual desires, secluded from unwholesome states of mind, a monk enters upon and abides in the first meditative absorption (jhana), which is accompanied by thought conception and discursive thinking and has in it joy and pleasure born of seclusion. This is the other kind of pleasure which surpasses that (sense) pleasure and is more sublime.”—-SN 36.19

These perceptions rely on holding a particular contrast in mind (SN 14.11), and result in a feeling of joy or freedom, which is the beginning point for meditation as Hallisey says.

I’m well freed, well freed,
so very well-freed from the pestle!
My disgusting husband blew up like a mushroom,
my mortar blew like an eel.

Might make people thing of mushroom clouds from explosions! How about ‘inflated’? It carried the meaning of blowing air, doesn’t have the double meaning of explosions, and, seems more understandable sexually than blowing up maybe?

’So freed! So freed!
I’m thoroughly freed from the pestle: [changing ‘my’ to ‘the’ makes the ‘home life’/‘sex life’ inuendo work better maybe? His penis was not ‘hers’, in English.]
My shameless husband’s inflating mushroom,
My eel-smelling mortar

Or… since the wind thing doesn’t really work with modern culture, perhaps even ‘growing mushroom’? Or ‘enlarging mushroom’?

When it comes to propagating Buddha’s teachings, Sutras and texts, the translations should be certified as being correct. The Buddhist Text Translation Society has strict translation guidelines. “The work of translating the Sutras is sacred work and it will last for endless generations.”