What's in a name?

Our plans to establish a new Bhikkhuni monastery in Belgium are progressing, but we forgot about one little detail: we don’t have a name yet!

Now after Ajahn @brahmali’s joke in a previous post, we thought we would call the new monastery Sītavana, the “cool grove”, after the grove near Rājagaha where Anāthapiṇḍika first met the Buddha. Well, in the last weeks it has indeed been pretty cool down here. This picture was taken when the surveyor came the other day and it was -12 C!
** 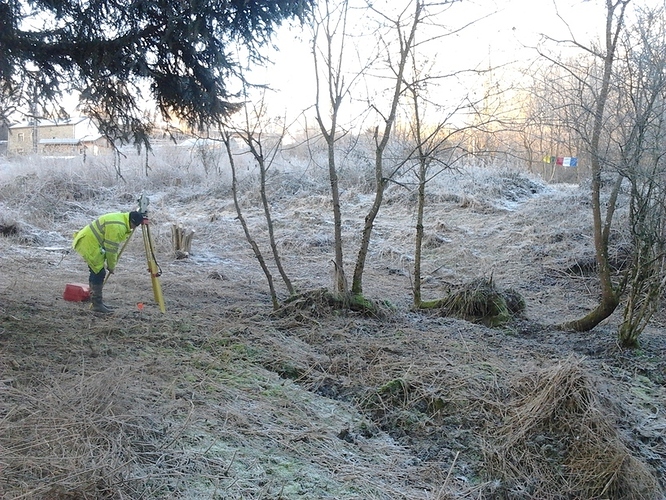 But I was wondering if any of you have any other cool suggestions… ! Let me know if you think of a good name for our monastery.

If you are wondering what we have been up to sofar and for some draft architectural drawings, go to the website: https://www.samita.eu/en/monastery-project/

Añjanavana (black forest) good? I am thinking of the moist cake

Cool Grove is much cooler.

Añjanavana (black forest) good? I am thinking of the moist cake

There is a Black Forest in Germany and that is where the name of the cake comes from.

But that sounds a bit too much like going down to the dark side.

Maybe something like rare or precious? To draw out the significance of having a Bhikkhuṇī monastery.

I’m rather hoping the wafts of time will correct this as soon as possible and it would be a shame to give the monastery a name that only makes sense historically.

@Aminah agreed. Doesn’t preservation and growth depend on regarding something as precious though?

@Vimala I think “cool grove” is pretty awesome, but since you asked for additional suggestions I’ll offer another:

The Pāḷi word for lapis lazuli. Besides this ¿gem? being regarded as beautiful and precious, the word itself I think is quite nice, kind of rolls off the tongue.

Doesn’t preservation and growth depend on regarding something as precious though?

At least in this context; absolutely!!! At the same time, I’m quite keen on separating out the rare & precious coupling. I know the scarcity principle is the big conceptual kid in town, but I’ve always had deep misgivings about it.

As for the question about the name, to be honest I thought it had basically been settled last October, and the good folk of Samita where going with Tāvatiṃsā Vihāra. It’s on the map any everything.

This monastery will be located in a cul-de-sac in a bend in the Ourthe river, in Belgium. Now Ourthe means ‘Our-father’.

‘Our Father in heaven, hallowed be your name. Your kingdom come, your will be done, on earth as it is in heaven. Give us this day our daily bread, and forgive us our debts, as we also have forgiven our debtors. And lead us not into temptation, but deliver us from evil.’"

If we take ‘Our father’ to be the Buddha, doing his ‘will’ will be practicing the dhamma!

So I came up with ‘Dhamma-dita monastery’, which means ‘daughters of the Dhamma’ monastery. Dhammadita is already a name used for an ordained Bhikkhuni.

This monastery will be located in a cul-de-sac in a bend in the Ourthe river, in Belgium. Now Ourthe means ‘Our-father’.

Interesting analysis, but I question if that is really correct.
The river Ourthe’s original name is Aiwe d’ Oûte. Aiwe means “water” (basically the Wallon word for the french “eau”). I cannot really find what “Oûte” is supposed to mean in the Wallon dictionary. The Wallon word for “father” is “pér”. If somebody has some knowledge of the ancient patois languages and has any idea …

I thought it had basically been settled last October, and the good folk of Samita where going with Tāvatiṃsā Vihāra.

I actually thought it was just a joke because Bhante had named Perth, Australia after a heaven too. Now we actually have some nuns who are going to live there (apart from myself) and the buildings are actually going to be put up, we started discussing the name also. But I will add the Tāvatiṃsā Vihāra idea to the list.

The Pāḷi word for lapis lazuli.

I kind of like that too. Especially because I was trained as a geophysicist and had a large collection of minerals at that time. Will add to the list.

Thank you all for your suggestions!

I got the meaning of Ourthe from here:

I didn’t mean it to be very serious or exact!

But I guess the name will have to be something distinct (sakyadita would be conflicting), memorable (not ‘Tweebuffelsmeteenskootmorsdoodgeskietfontein’), not conflicting with purpose (Asava monastery- outflows mirroring water) or trivial (the hut). Best if it was meaningful (something to do with wholesome dhamma) and where nuns would want to reside (shanti-peace, cool- as before-, sukha- bliss, samadhi- tranquillity, piti-joy). If Heaevn is crucial how about ‘Brahma vihara’

I think that’s the English dictionary. When I try “French to English” it does not know the word.
I did not think you were serious

I think the quote with the Tweebuffels… is very memorable for those who understand what it means … ha! But not very appropriate.

I like Sitavana. Has a good ring to it. Easy to say.

I actually thought it was just a joke

Bananas! It was, in fact, meant as an extension of that joke. I was relying on the idea that any proposal I might put forward here would, by rights, not be taken seriously just on account that I come from a land of people that saw fit to name their shiny new research vessel Boaty McBoatface.

I’m reluctant to make a suggestion, as so many of the suggestions above are so creative and interesting.

As Ayya’s new monastery has as its teacher Ajahn Brahm, and its Spiritual Advisor Bhante Sujato, I thought to tie the new name to some existing names or themes, so that the new name is easily identifiable and yet has a nexus with the Ajahns Brahm, Brahmali, and Sujato “lineage.”

So, Mettaloka. It’s a riff on Perth’s Dhammaloka, and a tip of the hat to one of Bhante Sujato’s centerpiece practices (and focuses via his teacher Ajahn Maha Chatchai) on Metta.

Maybe it has something to do with the association in my mind between myth and Bhante Sujato’s work.
But I must admit that when I first came to Santi Forest Monastery, I thought I had landed in Lothlórien.

In Southeast Asian mythology, Kinnaris, the female counterpart of Kinnaras, are depicted as half-bird, half-woman creatures. One of the many creatures that inhabit the mythical Himavanta. Kinnaris have the head, torso, and arms of a woman and the wings, tail and feet of a swan. She is renowned for her dance, song and poetry, and is a traditional symbol of feminine beauty, grace and accomplishment.

Kinnaris have the head, torso, and arms of a woman and the wings, tail and feet of a swan.

Reminiscent of Bhante’s beautiful cover of the new Sutta Nipata book and his comments on swans and Perth. Ayya, you might be on to something here…

Somebody should check my Pali, but my understanding is that Ninnavana would mean something like “low country grove”, but also carries the sense of a river valley area in which everything inclines down and leads toward the sea of nibbana.