will the true chief please stand up?

here appamada and yoniso-manasikara both say they’re THE chief. is this like clark kent and superman? or are they two different animals with some overlapping characteristics?

these 2 suttas occur under the bojjhanga SN. i believe the same dispute over who is chief occurs under the eightfold noble path SN with nearly identical wording in the suttas.

1“Bhikkhus, whatever states there are that are wholesome, partaking of the wholesome,77 “” pertaining to the wholesome, they are all rooted in diligence, converge upon diligence, and diligence is declared to be the chief among them. When a bhikkhu is diligent, it is to be expected that he will develop and cultivate the seven factors of enlightenment…

‘Mindfulness’ (‘sati’) means ‘to bring to mind’ and what mindfulness brings to mind is wisdom or sampajanna.

In other words, there cannot be mindfulness (sati) without sampajanna (situational wisdom). This is why sati is generally always co-joined with sampajanna, in the compound ‘sati-sampajanna’.

Similarly, heedfulness (appamada) cannot occur in isolation. The mind must be heedful of something and that something is based in wisdom, knowledge or yoniso-manasikara.

An example is saying to someone:

“Be careful; be heedful when you cross the road”.

There must be yoniso-manasikara associated with this heedfulness, namely, the wise-reflection:

“You must be heedful when crossing the road because there are fast cars driving on the road which may kill you if they collide with you”.

Ancient sculpture of Four Deer with One Head in the Ajanta Caves, symbolizing the Four Noble Truths: 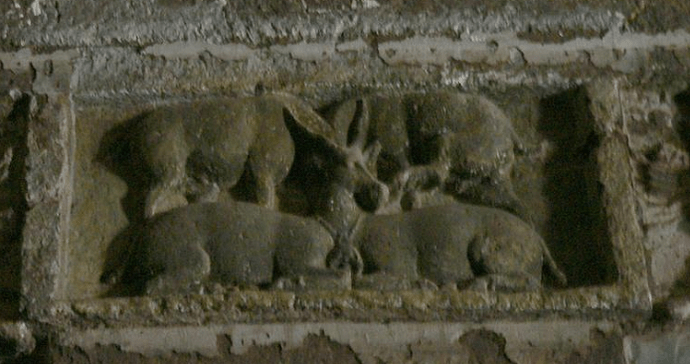 i’d say careful attention is a function of dilligence and although the latter being a quality must come first in my opinion, without an expression it’s idle and useless, so these are two sides of one coin

This phrase seems similar to ‘awareness’ for ‘sampajanna’, in that it has the flavor of concentration or ‘staring into space’ (rather than the functioning of wisdom)

stare: look fixedly or vacantly at someone or something with one’s eyes wide open.

the last words of the buddha before he entered pari-nibbaana:

appamada got the last word over yoniso manasikara, if that counts for anything.

appamada got the last word over yoniso manasikara, if that counts for anything.

The appamada here is co-joined with a yoniso manasikara (wisdom reflection), namely:

in the simile of the elephants footprint, which is the largest and encompasses all other animal foot prints, “appamada” is the quality used in comparsion. i don’t think that simile gets used for “yoniso manasikara”.

The Path(s) to Awakening
What does "appamada" mean?