Make us happy: tell us about our mistakes, errors, and typos

This thread is for anyone who notices any errors or bugs relating to texts on SuttaCentral, such as typos, translation errors, and the like. We are happy to learn of any mistakes in any of our translations and will try to fix them ASAP. Note, however: When it comes to legacy translations—i.e. translations that we have inherited from elsewhere—corrections will be limited to obvious typos and mistakes. While we try to source the best quality work we can, it’s not our job to edit or correct othe…

Thanks for letting us know what we can improve!

Just going through all your revisions in order to see in how far they may affect my own translations (this is keeping me busy for a couple days …), and I find in AN4.37:1.1:

“Mendicants, a mendicant who has four qualities can’t decline, and ihas drawn near to extinguishment.

Should of course be “has drawn near”.

Still seems fine to me. In fact I prefer it with a marker. Is there a reason you don’t like it?

Sorry, no. That must have been a misunderstanding. You once told me you did not want the marker but that was way back so I thought it was a mistake.

I’m not yet finished with the revision …

once told me you did not want the marker

Oh, lol, well I guess I changed my mind.

Should of course be “has drawn near”.

two cases of aṭṭhahi dhammehi where “factors” have remained instead of “qualities”.

Thanks, fixed. (turns out I can find these with the simultaneous English/Pali search on Bilara! I don’t use that enough.)

Thanks, I’ve fixed both of these. Keep them coming!

There are two terms here, lābha (= “possessions” in this context) and mamatta (= “possessiveness”). I’ve made sure the translations are consistent.

Although mamatta is presented here in a concrete way, for which “possession” would indeed fit, the word itself is an abstract formation from mama “mine”, so it literally means “mine-ness”, i.e. “possessiveness”. It’s not used anywhere, so far as I know, for the actual possessions (i.e. lābha).

Perhaps the purpose of giving the concrete example was to emphasize that giving up possessiveness is not just changing your attitude, you have to actually change your life.

Thanks for the reply, I will try to reflect the same in German.

Thanks so much for publishing the Sutta Nipata!

Looking at the overview page, I see a typo in the blurb for the Mahavagga:

Should be “more normally”.

@Sabbamitta should be remembered as “the one who corrects most rapidly…” 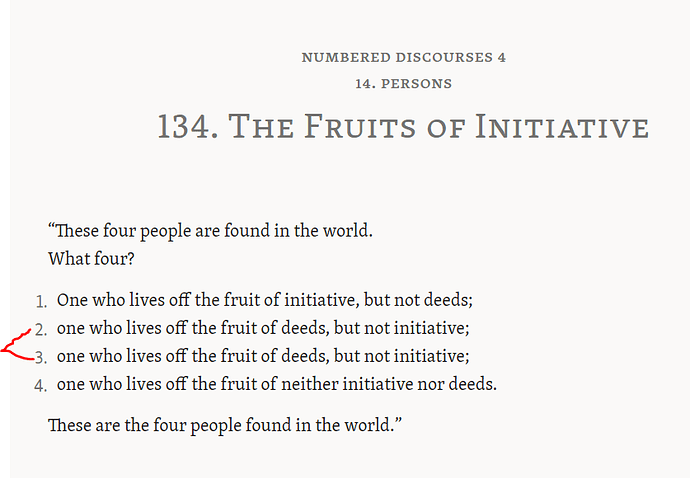 chaḷaṅgasamannāgataṁ is missing in translation

(And Nanda’s mother lives in the village Veḷukaṇṭa, so Veḷukaṇṭakī might not be her name. Isn’t it more likely that it means “from Veḷukaṇṭa”?)

The person’s name is Sabhiya, not Seniya.

Kd.14.4.1 to) that which had been done. Then this reasoning arose in the mind of the venerable Dabba the Mallian as he was meditating in solitude: “Perfection was realised by me seven years after my birth.

The first sentence seems incomplete. Several sentences from the Pali are missing in translation, but not sure if that’s maybe intentional. Ajahn @Brahmali

One “it” should be enough.

The first sentence seems incomplete. Several sentences from the Pali are missing in translation, but not sure if that’s maybe intentional.

A seemingly redundant stanza in dhp383-423/en/sujato:

They’ve given up craving, and have gone forth from lay life; they’ve ended craving to be reborn: that’s who I call a brahmin.

They’ve given up craving, and have gone forth from lay life; they’ve ended craving to be reborn: that’s who I call a brahmin.