Reading the Buddha's Discourses in Pali: A Practical Guide to the Language of the Ancient Buddhist Canon by Bhikkhu Bodhi

Reading the Buddha’s Discourses in Pāli - The Wisdom Experience

Bhikkhu Bodhi’s sophisticated and practical instructions on how to read the Pāli of the Buddha’s discourses will provide students of early Buddhism and Pāli language an intimate acquaintance with the language and idiom of these sacred texts. Here the...

Anyone have a copy of this yet? Looks exciting.

This book follows up on the lectures Bhante has given on Gair and Karunatilaka’s New Course in Reading Pali. Those lectures can be downloade here: bodhimonastery.org/a-course-in-the-pali-language.html

All of Bhante Bodhi’s courses at BAUS baus.org/en/teaching/learning-pali/

From the Amazon Free Kindle sample

The following are found in the free sample anyone can download from Amazon. The free sample includes the entire overview of Pali grammar. Quite an amazing resource.

We used the unpublished draft of this one with @johnk. The title kind of says everything: this is the book for you if you want to read the Buddha’s Discourses in Pali. Reading more discourses in Pali is definitely something you would want to do if you have used some other textbooks already. I got a lot out of it.

Reading the Buddha’s Discourses in Pali: A Practical Guide to the Language of the Ancient Buddhist Canon 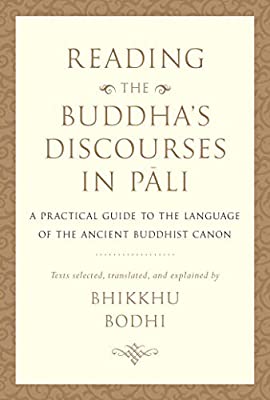 Reading the Buddha's Discourses in Pali: A Practical Guide to the Language of the Ancient Buddhist Canon

The book seems to be a guided reading / explanation of selected suttas from SN. I look forward to receiving the book on Friday.

If anyone will be reading the book, please feel free to post the discussions in this thread.

I pre-ordered on Kindle. It was waiting for me when I got up this morning!

I wasn’t sure from the description what background knowledge the book would assume. Could you start with this book? Would the book assume you had worked through an introductory text like de Silva’s Pali Primer? I’ve worked through that!

When I got the book the intro said:

The course is meant for students who have completed the earlier courses I gave on the basics of Pāli grammar and the reading of the Buddha’s discourses in Pāli, the former based on Lily de Silva’s Pāli Primer, the latter on James Gair and W. S. Karunatillake’s A New Course in Reading Pāli.

I’m a little less than half way through Gair and Karunatillake. I will see you in 6 months, Reading the Buddha’s Discourses in Pali!

Ah most excellent. Thanks for sharing that snippet. Very helpful to hear how Bhikkhu Bodhi himself sequences his offerings.

the earlier courses I gave on the basics of Pāli grammar

Does anyone know where these courses can be found?

I found Lily de Silva’s Pāli Primer on SN Goenka’s site (had to create a login) but only lesson 1 was available.

Here is a link to Bhante Bodhi’s lectures on New Course in Reading Pali:

A Course in the Pali Language | BODHI MONASTERY

Just discovered that there is a free sample anyone can download from Amazon. The free sample includes the entire overview of Pali grammar. Quite an amazing resource. Check it out.

@stephen Sas, who studies with Bikkhu Bodhi, taught an introductory Pali class on YouTube over the summer based on da Silva’s books. The class was discussed elsewhere on this site - and probably more than once, but here is a link to one mention. IIRC the BAUS website has links to download da Silva’s Primer and the Answer Key (2 texts).

ETA: Wow! BAUS has updated their website with their Pali language classes. Everything you need is here.

I’ve added your links to the OP. Thanks!

I have received and have been flipping through the book. Truly quite nice, but require serious studying.

One thing I notice Bhikkhu Bodhi is again emphasizing SN43, selected as the last chapter to suggest that this samyutta corresponds to the 3rd truth - the truth of the cessation of suffering.

I have always found this curious for multiple reasons. First, SN43 is a minor samyutta within SN. And if we compare with SA, the correspondence is with one sutra SA890 which Yin Shun refers to as part of the teachings of tathagatha, which is probably of slightly later period of compilation than the earliest sutra portion. And while it makes modern logical sense to talk about the path before talking the end goal of nibbana, in SN the order of the 4 truths is always suffering, its origin, its cessation, and the path leading to the cessation, in other words, “cessation” is always ordered 3rd before the path.

Personally, I do believe that SN earliest sutra portion does corresponds to the 4 truths. But I think the 2nd and 3rd truths are intended to correspond to SN12 on causation. In SN12, the basic frame (e.g. SN12.1) is to talk about both the origin AND cessation of suffering together. In other words, to highlight Buddha’s original teaching structure of the 4 truths in SN, I don’t believe a specific section on SN43 is really needed.

SN43 is a minor samyutta within SN. And if we compare with SA

Just a minor note: In 1994, Skilling reported that better parallels can be found in the commentaries preserved by the Tibetan tradition. So, SN43 is attested by the northern parallels, if not very solidly by the agamas.

Personally, I do believe that SN earliest sutra portion does corresponds to the 4 truths. But I think the 2nd and 3rd truths are intended to correspond to SN12 on causation. In SN12, the basic frame (e.g. SN12.1) is to talk about both the origin AND cessation of suffering together. In other words, to highlight Buddha’s original teaching structure of the 4 truths in SN, I don’t believe a specific section on SN43 is really needed.

Several years ago Bhikkhu Bodhi sent me an email in response to a query about a useful order in which to study the SN. He certainly mentioned SN12 as key to the second and third truth:

One should begin with Part III (of the Pali),
22-the Khandha-samyutta, followed by Part IV, 35-the
Salayatana-samyutta and 36-Vedana-samyutta. These were to represent
the noble truth of suffering.

Then take Part II, the Nidana-samyutta [12]. This represents the noble
truths of the origin and cessation of suffering. You can also look at
Part IV-43 and 44-which again relate to the truth of cessation.

Then take Part V [45-56], just about all the chapters are
important. This is called in Pali the Mahavagga, the large
compilation, but in the Chinese Samyukta Agama it was called
Margavagga, the compilation on the path; for it represents the fourth
truth, the way to the cessation of suffering.

I received a hard copy today and, going by first impressions, I am hugely impressed. This will no doubt become the standard reader for students of the language.

I was fortunate to study Pali at University with a wonderful teacher, but after nearly 20 years my knowledge is more than a little rusty! I’m looking forward to getting properly stuck into this book.

May the Ven. Bhikkhu Bodhi and all those involved in this project reap much merit

May it help lead all who read it on towards the final goal, nibbāna

What level of student would you recommend it for? I’m a total beginner. Thank you!

What level of student would you recommend it for? I’m a total beginner.

This is not the book for you. I would grade it as advanced. There is, however, a fair bit of vocab and grammar support in the notes, which means it isn’t too intimidating.

What level of student would you recommend it for? I’m a total beginner. Thank you!

The present book, the result of that procedure, is intended for both types of students who participated in my weekly Pāli class: those who have already learned the basics of Pāli grammar and, having become acquainted with the style and terminology of the suttas, now want to progress further in their reading, and those who do not wish to study Pāli grammar but would like to gain as intimate an acquaintance with the language and idiom of the texts as is possible without studying the language grammatically.

I haven’ seen the body of the text yet, so I can’t say either way. I wonder if @Leon or @Pamirs could take some photos of the inside and post them.

Here’s what Ven Bodhi says in the preface (viii):

One thing this book is not intended to be is a Pāli primer. While I offer a brief overview of Pali grammar and syntax, I do not provide detailed lessons in Pāli grammar in its own right…Those who want to learn Pāli grammar should turn to the books I used in the earlier two courses.

Since there are no grammar tables, the work cannot be used as a standalone text for studying Pali, even by those with a good existing knowledge of Indo-European languages.

However, the grammatical notes to each sutta excerpt really do hold the beginner’s hand and walk them through the texts, and include references to Duroiselle, Perniola etc.

I would say that if you have a basic understanding of the nominal and finite systems in Pali (e.g. you understand the case and number system and know where to look up say ant- stem declensions, and you understand tense and mood and stem formations), then that is quite sufficient to begin using the book productively. 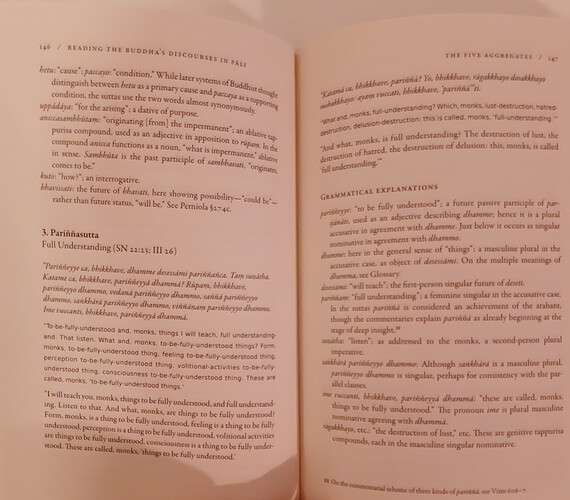 No no, the photo is perfect. It looks wonderful!

That rides on this.