Continuing the discussion from Dhamma doodles

I’ve received a lot of enthusiastic requests for more vinaya doodles, so I’ve decided to give it a try.

Experience shows that vinaya threads can lead to very heated debates, and people seem to have particularly strong views, so I’d like to set some ground rules:

@Aminah has volunteered to keep an eye on this thread to make sure participation is pleasant for everyone. Yay, many thanks!

Some basics about the patimokkhas:

There are 8 parajika rules in total: 4 shared rules and 4 only for bhikkhunis. Breaking one of them leads to immediate disrobing.
You can find the rules here. 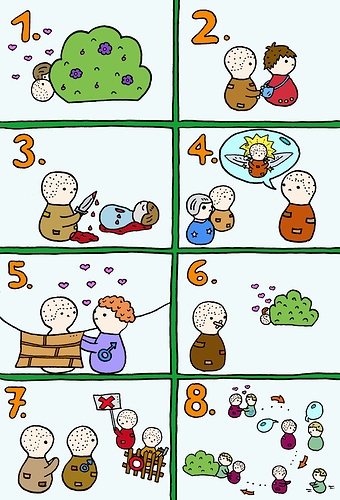 Sanghadisesas are the second most serious class of offenses. Breaking one of these rules is very inconvenient for the monastic in question who loses certain privileges, and also for the sangha as a whole. To clear them, it is necessary to hold several meetings of sangha members. To complete the process, a group of 20 monastics for bhikkhus, or 40 for bhikkhunis, has to come together.

There are two different groups of sanghadisesas: rules that are broken as soon as a monastic acts in a certain way (“immediate offenses”), and rules that are only broken after a monastic has been formally asked three times by the sangha to stop a certain behaviour (“offenses after three admonishments”).

After the third admonishment 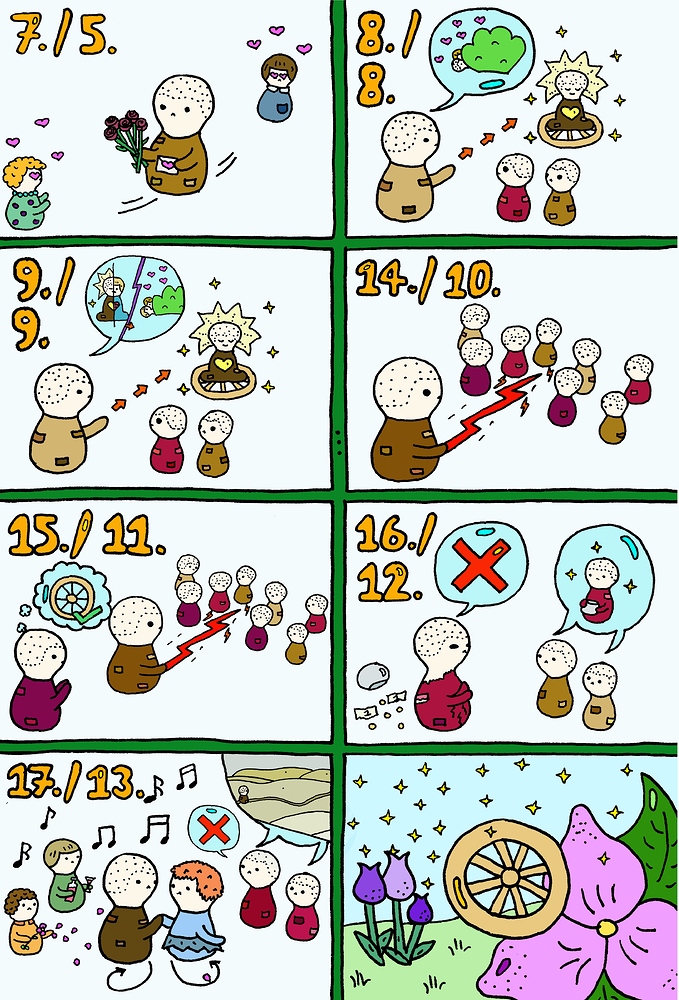 A fun and cute way to hopefully remedy my sadly deficient education in the Vinaya!

The sanghadisesas for bhikkhus only 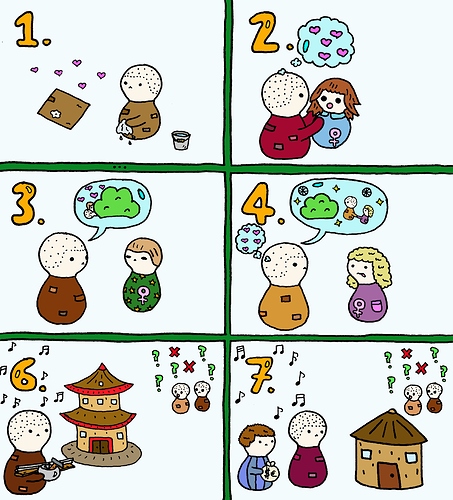 Given there are a few rules pertaining to male lust Venerable, is there a rule for prohibiting a monk focusing their lust on a specific woman. Meditation adepts can encompass the minds of others and sometimes this is with lust unfortunately. Whilst these issues are not talked about because it is difficult to prove, they are a serious breach of trust in monastic- lay relations.

The vinaya rules only cover actions by body and speech.
Many rules have a mental component, and a bodily or verbal action is only an offense if you have a certain mindstate. For example if a monk touches a woman with lust in his mind, or if a monastic takes an object with the intention to steal, etc.

But purely mental actions do not fall under the vinaya.

The sanghadisesas for bhikkhunis only – part 1, the immediate offenses 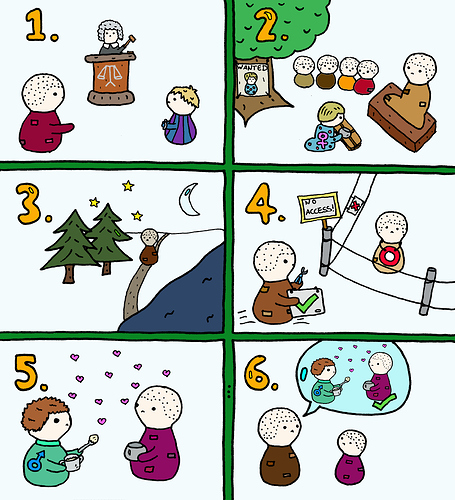 The sanghadisesas for bhikkhunis only – part 2, the offenses after three admonishments 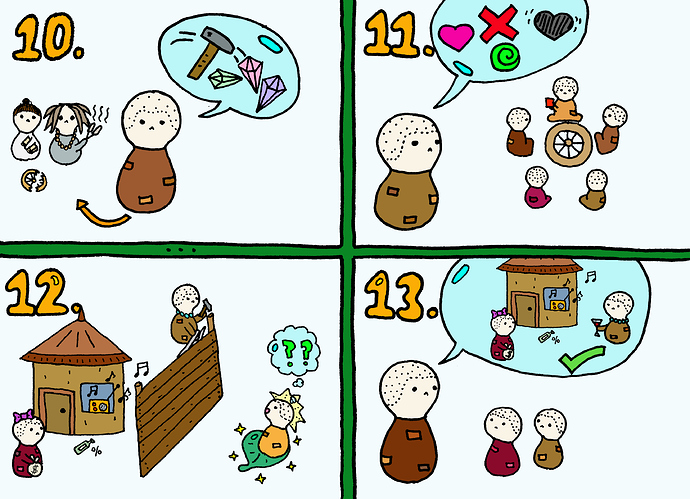 These offenses are quite reasonable. I do wonder about the specificity of gender given that they actually do not have any physical component? For example, given #4, I do now try to restrain myself when tempted to give matchmaking advice.

I do wonder about the specificity of gender

Generally, the Buddha laid down a rule whenever a monastic behaved in an unsuitable way. If the monastic was a nun, then the rule was included in the bhikkhuni patimokkha only. If it was a monk, the rule is often found in both patimokkhas, unless the rule does not apply to women/nuns for some reason (different body, different social roles, etc.).
One theory says that bhikkhunis keep most of the bhikkhu rules because the bhikkhu patimokkha was already fully formed when the bhikkhuni sangha was founded, so they just inherited it. It is equally possible that the bhikkhu patimokkha wasn’t complete yet but whenever the Buddha laid down a new rule for the monks, the nuns were expected to keep it too.
Given the different social status back then, it may have been difficult to make the monks keep rules that were laid down for women. That might be why the bhikkhuni patimokkha is much larger.

The Aniyatas (undetermined rules) are a class of offenses for bhikkhus only. There are only two rules in this class.

They cover cases where a trustworthy laywoman sees a bhikkhu alone with another woman in unsuitable places and reports it to the sangha. The sangha will then question the bhikkhu to find out what exactly happened, and if the report of the laywoman turns out to be true, the bhikkhu will have to clear the offense with the appropriate procedure. As the bhikkhu could have broken a parajika, a sanghadisesa, or a pacittiya rule, the procedures may vary, and therefore this class is called the “undetermined rules”.

Edit: Here’s a link to the rules.

bhikkhuni patimokkha is much larger

…and perhaps that greater length would make them wiser as well.

The rule against matchmaking struck me as silly until I really thought about it. Matchmaking and encouraging entanglements does indeed lead away from renunciation into identity view. So I’ve basically decided that I should follow that rule #4 as well.

The rule on shaving armpits?
That one makes absolutely no sense to me … yet. Pits stink. It’s hygiene.

Pacittiyas are the group of offenses with the most rules, and can be cleared by simply confessing to a fellow monastic (monks with monks, nuns with nuns).
Some rules involve the misuse of an object, such as a robe or a needle box for example. In these cases, the monastic needs to do something with the object before the offense is cleared — giving it up, cutting it down, breaking it, etc.

In the class of nissaggiya pacittiyas, all rules cover situations where the object has to be given up to a fellow monastic before confessing (nissaggiya = to be given up). For example, if a monastic has accepted money, or received a robe or a bowl in an unallowable way, they have to be handed over during the procedure. 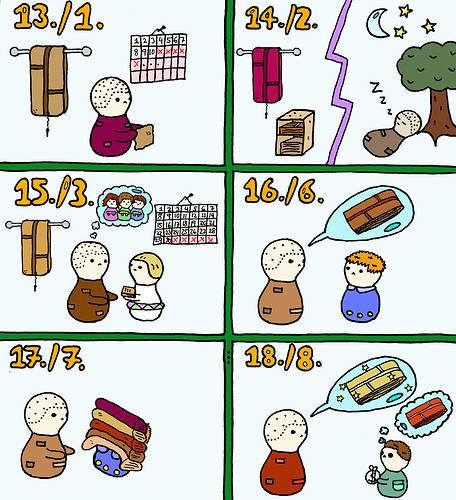 I have been asked to include the numbers from the bhikkhuni and bhikkhu patimokkhas in the doodles, so that people can look up the rules more easily.

Thank you! I didn’t want to ask myself, but am grateful to whomever did and to you for obliging; this is really helpful!

As ever, of course, much thanks for sharing your work and this fantastic series.

I guess if its not an offense then the key thing is consent. The lack of consent needs to be addressed. The problem is monastics prefer to stay silent on the matter and maintain the wall of pretense.

In order to keep this thread focused on the Dhamma Doodles themselves, it would be best if discussions that arise out of them, are posted as a new topic in either the discussion or watercooler categories. So if you would like to continue discussing the point you made, could I ask you to re-post it.